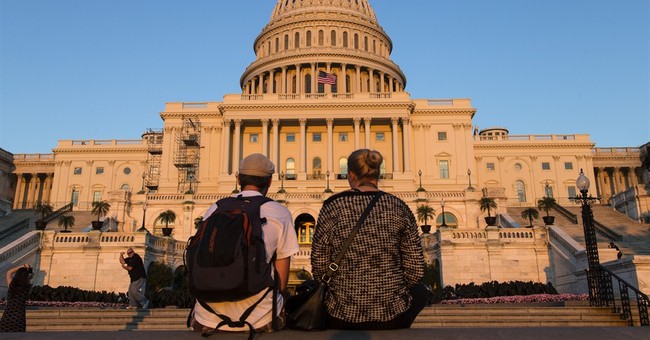 Geraghty is a regular contributor to National Review, including his must-read daily “Morning Jolt” email. His blog has had various iterations, including the The Kerry Spot (in 2004), TKS, The Hillary Spot (in 2007), and now The Campaign Spot at National Review. He is also the author of Voting to Kill: How 9/11 Launched the Era of Republican Leadership and The Weed Agency: A Comic Tale of Federal Bureaucracy Without Limits, which comes out next year.

Make July 5 a national holiday, ensuring no one had to go to work the next morning after July 4. Oh, and it’s my birthday, too.

If I had to give a more serious answer, I would say, eliminate income tax withholding and have everyone pay their taxes in one lump sum in April.

Ms. DePaola for history in high school. That class was the one where we were most likely to get into a discussion about current events or politics, and while I think she would be somewhat horrified to see my rise in the ranks of the vast right-wing conspiracy, she always encouraged my interest in politics and the world beyond the walls of our high school. Our senator at the time, Bill Bradley, ran a program for high schoolers, a one-day event with him discussing current events. She and the other teachers selected me my senior year, and I think I may have been the only one in the class interested.

I have a novel coming out next June from Crown Forum at Random House, and I’m really hoping it leads to more opportunities to write fiction in the future. I’d like a job where I could travel overseas… but at my own pace.

I used to draw cartoons for the web sites IntellectualCapital.com and Policy.com. I wish there were enough hours in the day.

Back in 2004, a few months into my writing The Kerry Spot, NR had a party at Kate O’Bierne’s house. The guests included some pretty big names - presidential speechwriters, columnists, authors – people I had seen only on television screens before. This was right in the middle of the whole Dan Rather fake-memos scandal.

My boss, Rich Lowry, gets up and thanks everyone, goes through NR’s contributors, introduces me, and mentions my nickname “Pajama Been Bloggin’ of the Pajamahadeen” – and all of the big names in that room cheered and applauded. And I was just flabbergasted that these folks knew who I was and liked what I was doing.

Over time I find myself enjoying being on a stage more and more. When your comments are generating those nods of agreement and people are laughing at your jokes

I feel really disconnected from the television choices these days. My all-time favorites have always been sort of quirky cult favorites: Twin Peaks, Max Headroom, Firefly, the British version of Coupling. I do find that ‘How I Met Your Mother’ is my current perfect disconnect-brain-and-commence-laughing show, and thanks to syndication, it appears to be on at all hours of the night. Maybe it has its own channel by now.

When I was about… maybe nine or ten, and my brother was five or six, our parents got us the G.I. Joe “U.S.S. Flagg” toy aircraft carrier for Christmas. It cost more than a hundred dollars in mid-1980s money and we never imagined we would actually get it. It was seven feet long, occupied part of the living room for a week then had to be carried upstairs to our play room. I think we played with it for about two weeks nonstop.

I think the engagement ring I gave my wife was pretty spectacular.

Cam Edwards, Marshall Manson and I were a regular drinking crew for a few years, before our various overseas jaunts. We had discussed creating a show that would be “The McLaughlin Group in a bar” and it would fit in well with the unpredictable energy and wild humor of “Red Eye.”

10. What was the best book you read this summer?

I’m going to cop out and mention a few. Brad Thor’s “Hidden Order” was almost as good as his brilliantly prescient, fast-moving “Black List.” I like James Rollins’ series; they’re about as close to modern-Indiana-Jones as anyone’s doing today. I read Adam Carolla’s autobiography, “Not Taco Bell Material,” on the NR Cruise and enjoyed it more than I expected – a very unexpected tale about growing up, working hard, and being responsible while simultaneously having an image as a immature, off-color, perpetual adolescent.

A lot of media critics mix up the terms ‘objective’ and ‘fair.’ I’m not objective, and almost no one who writes about politics is truly objective. Objective means you either have no opinions about the issues or people you write about, or that you’re so fantastic about compartmentalizing your viewpoint that your views and values never influence what you write about or how you write about those issues or people. A lot of reporters think they’re objective, and they just plain aren’t. They insist that their reporting is honest with readers, but they refuse to be honest about what their opinions are.

I’m not objective, but I try to be fair, or at least fair-minded.