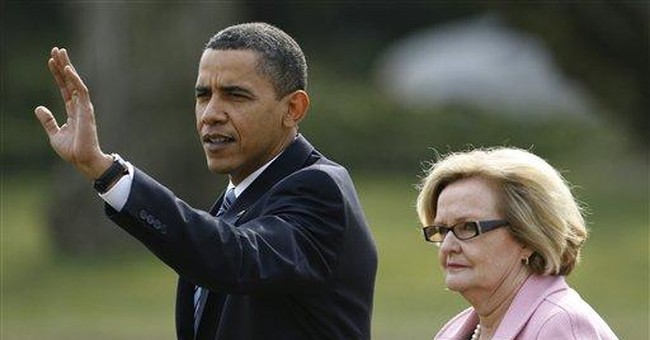 When I started the De Pasquale’s Dozen in 2010, I wanted to show a different side of political figures, as well as introduce readers to up-and-coming conservative leaders. Over the years I’ve interviewed several primary candidates, including Marco Rubio, Allen West, Richard Mourdock and Adam Hasner. This week, meet Sarah Steelman, U.S. Senate candidate from Missouri.

Steelman is the mother of three sons. She lives in Rolla, MO with her husband and youngest son. She was the Missouri State Treasurer from 2004 to 2008, managing the state’s revenue and investments. She instituted a terror-free investment model, insuring that no taxpayer funds were invested in countries that support terrorists. This policy has since been modeled by many other states.

Prior to her tenure as treasurer, she served for four years in the Missouri State Senate. She has also held positions at the Missouri Department of Natural Resources, the Department of Revenue, adjunct professor in economics at Lincoln University, and director of the Big Brothers and Big Sisters program in Rolla, MO.

Steelman is running in the Republican primary for the seat currently held by Sen. Claire McCaskill. She has been endorsed by over 40 conservative state legislators and the Tea Party Express. Tea Party Express founder Amy Kremer said, "Sarah Steelman has that maverick streak and will fight for what is best for the people of Missouri and all Americans. She is principled and will not waver from those principles. She has stood up to the establishment before and I have no doubt she will do it again. When I think of Sarah, I think of a mama grizzly fighting for the future of her children. She is exactly what we need in the U.S. Senate!"

A recent Rasmussen poll shows Steelman up 10 points over McCaskill in a head to head match-up. Poised to help conservatives take back the Senate in 2012, Steelman is a conservative leader you should be following.

Each week the De Pasquale's Dozen asks political figures and free market-minded writers and entertainers to take a break from politics and talk about their pop culture obsessions.

1. If there was a television channel that showed only one movie over and over, what movie should it be?

To Kill a Mocking Bird

2. What’s one of your favorite movie quotes?

William Wallace: There's a difference between us. You think the people of this country exist to provide you with position. I think your position exists to provide those people with freedom. And I go to make sure that they have it.

3. In A Clockwork Orange, Malcolm McDowell is strapped in with his eyes propped open and forced to watch images until he was "cured." If you could give President Obama, Nancy Pelosi and Leader Harry Reid the "Clockwork Orange treatment," what movie would you make them watch?

Braveheart - “They may take our lives, but they will never take our FREEDOM.”

4. What pop culture souvenir do you own that people would be surprised to learn that you cherish?

A backyard trapeze that my father built for me. It was around 12 to 15 feet off the ground, looking back on it, I don’t know how I didn’t kill myself. I used to stack a ladder on top of a picnic table and jump for it… definitely high risk.

7. What was the first rock concert you ever attended and where did you sit and who went with you?

The first rock concert I ever attended was in Fulton, MO. Harry Chapin was playing and I went with my boyfriend at the time… I can’t remember where I sat.

My dad was pretty basic. He always said if you can’t find happiness in your own back yard you’ll never find it. To me, this is another way of saying you choose to have a good attitude regardless of your circumstances.

9. If Republicans and Democrats had theme songs for 2012 what would they be?

For me, definitely would have to be “Way Out Here” by Josh Thompson because they just don’t get it any more. For Democrats: “Waiting on the World to Change” by John Mayer.

11. What is your favorite home-cooked meal?

Fried Chicken if somebody else makes it.