Truth Is Best Antidote to Prejudice

Linda Chavez
|
Posted: May 18, 2018 12:01 AM
Share   Tweet
The opinions expressed by columnists are their own and do not necessarily represent the views of Townhall.com. 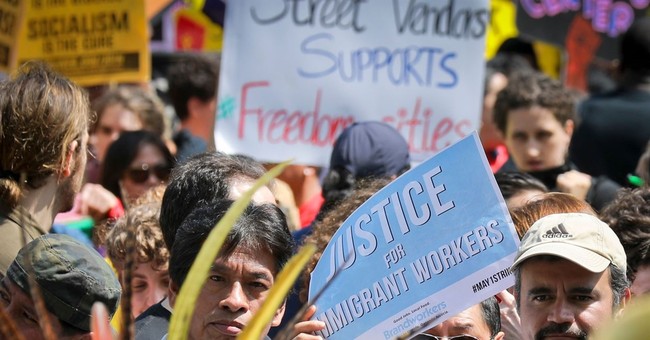 The man yelling in a video that has gone viral this week threatens employees at a New York deli that he will call U.S. Immigration and Customs Enforcement because he overheard employees speaking Spanish: "If they have the balls to come here and live off of my money -- I pay for their welfare. I pay for their ability to be here. The least they can do -- the least they can do -- is speak English." It was an ugly episode, but should it surprise us when the president of the United States feels free to call some unauthorized immigrants "animals" and the White House chief of staff says that today's immigrants from Latin America "don't integrate well" and "don't have skills"?

The deli incident revealed what a lot of Americans believe about immigrants, that they come here to take advantage of welfare, that they cost Americans without benefiting the country. Chief of staff John Kelly made much the same point, though in less inflammatory language. And the president? Well, we know he thinks Mexicans are rapists -- a comment he made during his announcement of his presidential candidacy and repeated in April, alleging, without any evidence, that on their journeys to the border, "women are raped at levels that nobody has ever seen before."

How do you counteract such ignorance and bigotry? I've always believed that the best way to do so is to report evidence that contradicts these images. But I wonder now whether truth matters. In a world in which White House aides can, with a straight face, report "alternative facts," when the president can lie with impunity about things large and small, what recourse does the truth have?

By definition, prejudiced people prejudge the facts. The man in the video heard Spanish and assumed the speakers don't speak English. In fact, they do; they were speaking to one another and to Spanish-speaking customers in a language they are most comfortable in, but the audio of the tape clearly demonstrates that the speakers have command of English. As for their putative welfare status, these people were working, taking jobs that I doubt the provocateur in the video would be willing to do.

A recent study by the Cato Institute shows that Central American immigrants (who are an increasingly large share of immigrants from Latin America and the focus of recent animus) are assimilating just fine. Like immigrants from all non-English-speaking nations and from every era in American history, new immigrants often don't speak English well, but the longer they are here the likelier they are to acquire English skills. By the time they have lived in the U.S. for 15 or more years, the majority of adults from Central America speak English (and their children are fluent in English, with 97 percent speaking English well or very well). They also work at rates higher than other U.S. adults. In one year, nearly 60 percent have found jobs, and at five years, three-quarters have. Compare that with the fact that only 60 percent of all U.S. adults are employed. Central Americans are likelier to live in poverty during their early years in the United States, but after 30 years, their poverty rate is lower than that of other U.S. adults. Adults of Central American ancestry had identical rates of educational achievement as other Americans, as well. Thirty percent of the adult children of Central American immigrants had attained a college degree in 2016, and only 10 percent had dropped out of high school. Of these first-generation Americans, 78 percent were employed in 2016.

These facts won't change the minds of bigots. But they should be encouraging to the majority of Americans who shudder when they hear the ignorant words of an angry customer or those who work or live in the current White House.