Use Bipartisan Opening to Protect Dreamers

Linda Chavez
|
Posted: Sep 08, 2017 11:15 AM
Share   Tweet
The opinions expressed by columnists are their own and do not necessarily represent the views of Townhall.com. 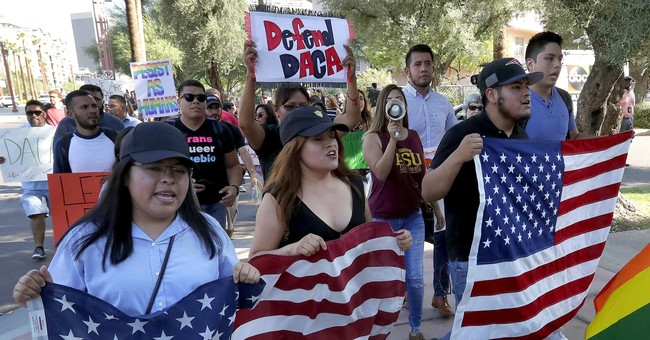 President Donald Trump's decision this week to remove protection for 800,000 immigrants who came here illegally as children was both cruel and thoughtless. Pressed by hard-liners in his administration and hemmed in by his own campaign rhetoric, the president punted. Rather than announce the decision himself, Trump sent beleaguered Attorney General Jeff Sessions out to announce an end to the Deferred Action for Childhood Arrivals program. But in characteristic fashion, the president quickly undercut his own policy by tweeting that if Congress doesn't act to fix the problem, he will revisit his decision. It was pure Trump -- all impulse and no thought.

The ball is now in Congress' court -- where it has always been. President Barack Obama's decision to protect so-called "dreamers" through executive means was fraught with danger. It was never a permanent fix; it was just a way to ensure that those who had violated U.S. law through no fault of their own could remain in the country they called home without fear of being deported, as long as they obeyed the rules. As I argued at the time, President Obama was well within his authority to decide that these young people were not a priority for deportation -- but to provide real security to these young immigrants, Congress needed to pass legislation.

The votes are there to pass a bill to protect childhood arrivals, but it will require bipartisanship of the kind not seen often during the 115th Congress. Democrats are ready to vote for a bill to put dreamers on the path to citizenship; the issue has become a virtual litmus test on the left. And despite the ugly rhetoric on the right and the anti-immigrant fanaticism in the GOP base, there are enough Republicans who favor helping dreamers to get legislation through both houses. The trick will be getting a bill to the floor. But Trump may have given House Speaker Paul Ryan and Senate Majority Leader Mitch McConnell the perfect excuse to buck the extremists in their party.

In an Oval Office meeting with congressional leaders this week, President Trump decided to throw his fortunes in with Senate Minority Leader Chuck Schumer and House Minority Leader Nancy Pelosi by backing the Democrats' proposal to keep the government funded and raise the debt ceiling for three months instead of seeking a longer-term debt and funding solution favored by his own party. The decision took Republicans by surprise -- though it shouldn't have. Trump is nothing if not fickle. He rode Republican anger to the White House, but he has no commitment to conservative principles or loyalty to a party he opportunistically embraced. But this betrayal also gives Ryan and McConnell an opportunity to move forward on legislation that requires Democratic votes to pass.

The biggest impediment to passing legislation to give childhood arrivals permanent resident status has been the reluctance of GOP leaders to bring a bill to the floor that the majority of their members do not support. The "Hastert rule" -- named for former House Speaker Dennis Hastert, who used it to maintain party discipline -- has kept immigration reform from coming to the House floor since 2013 when then-Speaker John Boehner decided to block any immigration reform bill that could not muster majority support among Republicans. But Speaker Ryan could ignore the Hastert rule, which is not a formal part of House rules but only a partisan tactic, and allow one of the fixes to move forward.

President Trump has done his best to humiliate Republican leaders in Congress, so why do they owe him any degree of loyalty? If Congress hopes to accomplish anything in the next year and a half, McConnell and Ryan will have to carve out a path of their own. It can begin with recognizing that dreamers are Americans in every way that matters. Half of dreamers came when they were 6 years old or younger. They have attended American schools, graduated and gone on to be employed at rates higher than their American-born peers. They can and should be asked to give back to the country by paying taxes and serving in the U.S. military -- but they won't be able to do those things without permanent resident status. The alternative would be to deport hundreds of thousands of young, productive workers. Why would anyone want to see that happen?

McConnell and Ryan should reach across their respective aisles and enlist the votes to pass immigration reform. It's the right thing to do.