Linda Chavez
|
Posted: Jul 21, 2017 12:01 AM
Share   Tweet
The opinions expressed by columnists are their own and do not necessarily represent the views of Townhall.com. 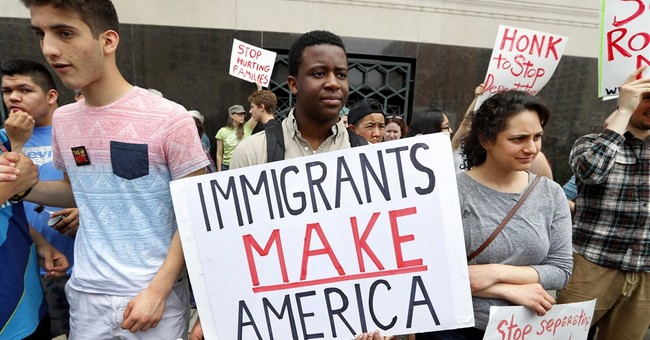 President Donald Trump may not yet have built his "big, beautiful wall" along the southern border or figured out a way to make Mexico pay for it, but immigration is one area where the president seems committed to keeping his campaign promises. Illegal immigration, which was already at a 40-plus-year low when the president was sworn in, has fallen even further in his first six months in office. The administration has stepped up immigration arrests, averaging over 13,000 a month since February, abandoning the policy in effect under several previous presidents that concentrated on rounding up criminals and recent arrivals. And the administration is intent on punishing cities and states that are insufficiently cooperative on immigration enforcement, though its efforts to withhold federal funds from such jurisdictions is being challenged in the courts.

You'd think this would be enough to satisfy immigration hard-liners, but some are still grousing that President Trump has yet to pull the plug on the Barack Obama-backed program that gave temporary protection from deportation to illegal immigrants who came to the U.S. as children or young teens. The so-called "dreamers" seem to be the only foreign-born residents for whom President Trump has a soft spot (save his wives and seasonal visa holders on the payroll at Mar-a-Lago). The president has, so far, refused to rescind the Obama administration's Deferred Action for Childhood Arrivals, but now several states are threatening to sue if he doesn't suspend the program, which currently gives some 800,000 dreamers the right to live and work in the U.S. provided they are enrolled in college or serve in the military, pass a background check and have no criminal record. What President Trump should do instead is get behind legislation introduced by Rep. Carlos Curbelo, R-Fla.: the Recognizing America's Children Act, which currently has 17 Republican co-sponsors in the House.

RAC, like previous legislative attempts to grant legal status to those who arrived as minors, would give provisional status to applicants who were in school, worked continuously or enlisted in the military. All applicants would have to pass rigorous background checks, have no criminal record, could not receive public welfare and would have to submit biometric data. Only those who fulfilled these obligations, paid taxes (including any back taxes owed plus interest) and stayed employed or in school or in the military would be eligible to become legal permanent residents.

Most Americans, including 7 in 10 Trump voters in a recent Morning Consult/Politico poll, favor allowing childhood arrivals to remain in the U.S. and be granted legal status. And it's no wonder; these are the most productive and sympathetic group of illegal immigrants. Most were too young to have knowingly violated U.S. law. They came here as youngsters, went to American schools, learned English and know no other country but this one as home. A recent Cato Institute study of these young people reveals that the average DACA participant is 22 years old, employed and earns $17 an hour. Most are also enrolled in higher education, and 17 percent are pursuing advanced degrees. These are exactly the kind of immigrants America should want. What possible benefit would be gained by removing these young people -- especially after we've already invested in educating them?

Republicans have increasingly earned a reputation as anti-immigrant -- and no one more so than President Trump. But immigration is part of what makes America America. We aren't a nation that defines itself by blood. We attract the best and brightest and hardest-working people from all over the world, and we always have. For most of our history, our doors were wide open, admitting anyone who had the will to get here. And our generous immigration policies have helped make us the most productive and successful nation in the history of the world. We are constantly renewing ourselves and gaining in the process.

President Trump has few legislative victories to claim. Getting behind the Recognizing America's Children Act could give him a needed win -- and fulfill his most important promise, to make America great again.