Linda Chavez
|
Posted: Mar 11, 2016 12:01 AM
Share   Tweet
The opinions expressed by columnists are their own and do not necessarily represent the views of Townhall.com. 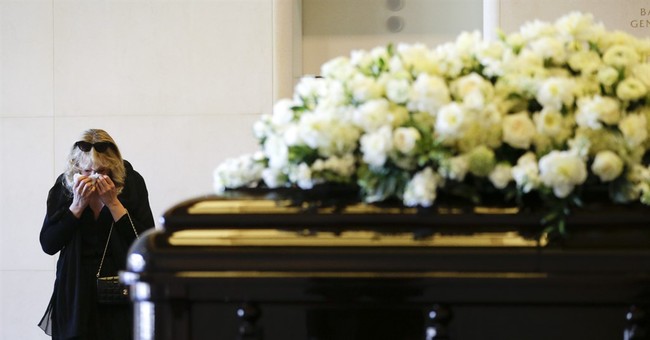 Nancy Reagan's death marks the final chapter in what was one of the greatest love stories of all time. The role of political spouse is not an easy one, but Mrs. Reagan managed her role brilliantly.  She had her critics -- most notably former White House chief of staff Donald Regan, who accused her, unfairly in my view, of meddling and using astrology to try to steer the president's course -- but her only priority was protecting the president. I served on the senior staff of the White House in Ronald Reagan's second term as director of public liaison, at the time the highest job held by a woman. My interaction with Mrs. Reagan was minimal -- a few social occasions -- but I was close enough to witness the bond that existed between them.

President Reagan always seemed to me a very private man, despite his outward ease with people. As his published love letters to Nancy made clear, she was the one person whom he trusted completely. She was his rock. "There would be no life without you nor would I want any," the president once wrote her. When you saw them side by side, you could feel their connection. It wasn't just the way she looked at him, a gaze that drew much snide ridicule from their detractors. If you looked at the president with Mrs. Reagan next to him, you felt as if she was his guardian angel. There was an invisible wall around them that kept everyone else at bay.

The only time I glimpsed them in a private moment was during a Christmas party for the White House staff. It was late in the evening, and I had slipped out into the grand hallway on the second floor of the White House. The Reagans were known to retire early, and sure enough, as I looked down the long red carpet, I spied Mrs. Reagan, a glass of wine in her hand, gently kicking up her high heels in rhythm to the music emanating from the next room, the president at her side. Their backs were to me, but I imagined her smiling, maybe humming along, when the president gently took her elbow and steered her toward the elevator to their private residence on the third floor. She seemed to be having such a grand time, and he seemed to be her steady hand.

Life in a fishbowl is not easy, but as the pictures of their private rooms in the White House show, Mrs. Reagan tried to create a home for her husband. They ate their meals on TV trays in the residence, the kind of relaxed California style in which they had lived their lives before the presidency. It was their cocoon, where the president could retreat from the burdens and worries that everyone who occupies that office must bear on his shoulders every day.

I doubt they talked politics. His politics were deeply rooted in a political philosophy acquired through reading and experience. He needed no one to guide him in those quarters. But you can imagine him unburdening himself to her about the tough decisions he had to make, the best way to deal with troublesome adversaries or convince skeptical allies of the right path. Most of all, however, you can imagine that she lifted his spirits when they were down, convinced him that no matter how difficult the task seemed, he was up to it.

No marriage is perfect, but theirs seemed as close to perfection as one can imagine. We don't often think of the importance of the role of first lady in terms of what she does to keep the president on an even keel. History is replete with examples of presidents whose wives were a source of distraction and sorrow for their husbands. In almost undefinable ways, however, Nancy Reagan made Ronald Reagan's legacy possible. And that is something for which the country, indeed the world, owes her a debt of gratitude.