A Thug by Any Other Name 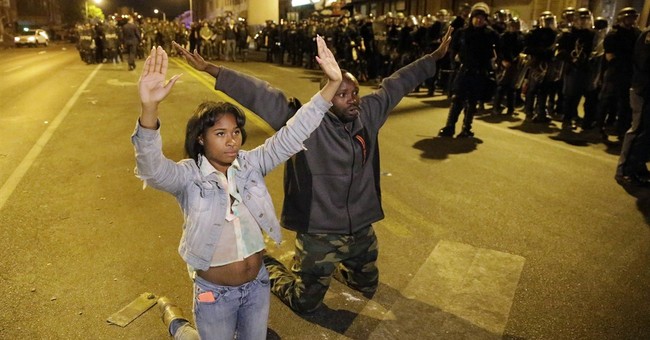 For most Americans, including President Barack Obama, the term "thug" seemed an appropriate appellation for the rioters who destroyed businesses, homes and other property in Baltimore this week. Now liberals are crying foul. The Baltimore Sun has editorialized, "Having city leaders apply it to the high school students and others who rioted throughout Baltimore tells the offenders that they weren't just wrong in what they did, but that they're also worthless because of it -- something too many people already believe."

Baltimore's mayor, after initially using the term, apologized on Twitter: "That night we saw misguided young people who need to be held accountable, but who also need support. And my comments then didn't convey that." Several commentators have likened the use of the term to the N-word.

But a thug by any other name remains just that. What does one call the people running into a Baltimore CVS and stripping its contents before setting it afire? Somehow "misguided young people" doesn't quite convey the behavior or the participants.

The world watched while parts of Baltimore burned. Not just stores owned by big corporations who can rebuild -- though most likely somewhere else -- but mom and pop storefronts blazed throughout the night, as did a brand-new senior housing center and modest row houses that had been owned by some families for generations. To try to understand the perpetrators' motivation or to excuse their actions is a great disservice to the victims of the violence.

Thank goodness the riot was short-lived. The credit goes in equal measure to Baltimore residents who took to the streets to say no to violence and the governor of Maryland, who ordered a state of emergency and sent in state police and the National Guard to restore order.

The fact is that the neighborhoods that suffered most in the riots need more police officers, not fewer, despite the chants of some protesters. Baltimore has long bucked a national trend of declining violent crime. As Jason Riley noted in The Wall Street Journal, violent crime in Baltimore is three times the national rate, and the murder rate is more than six times higher. And things are getting worse. Through the first three months of this year, the murder rate was up 20 percent over the same time period last year.

None of this is to diminish the horror of what happened to Freddie Gray in police custody. The man suffered three broken vertebrae and a nearly severed spinal cord. A police investigation has now been turned over to state prosecutors, who will decide whether charges are to be filed against the officers in charge. We don't know exactly what happened -- and perhaps we never will. But we know enough to say that something went terribly wrong.

The Washington Post has reported that a prisoner being transported in the van with Gray claims Gray was thrashing about and hitting the sides of the vehicle, perhaps in an attempt to hurt himself. But even if those reports turn out to be true, it does not necessarily absolve the police department of culpability in his injuries. Throwing a handcuffed suspect in the back of a van unsecured is an invitation to injury. To excuse the behavior of individuals -- even police officers -- who treat a human being, including a criminal suspect, like human garbage isn't much better than calling thugs "misguided."

We give police officers tremendous authority and deference in our society -- but with that comes responsibility. I don't underestimate the toll inflicted on police who have to deal day in and day out with violent, dangerous individuals. It's not a job most of us could do. But turning a blind eye when individual police officers use excessive force or are negligent in ensuring the safety of those in their charge encourages the bad actors.

Those of us who believe in law and order must hold all individuals who behave violently accountable for their actions -- and that goes for kids hurling rocks and looting, as well as the men and women who arrest them.