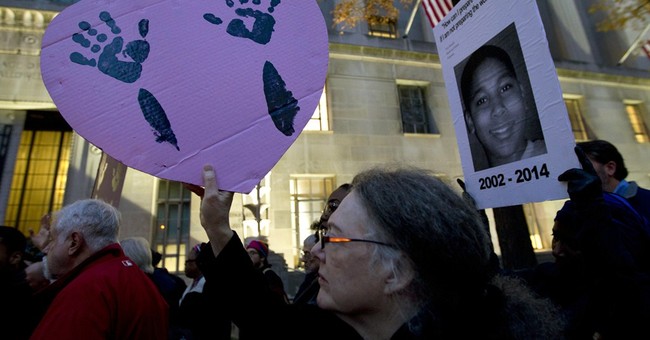 The two cases are worlds apart in terms of the actions of the men who died and the officers who caused their deaths. Unfortunately, on both sides of the argument, proponents seem all too ready to adopt a narrative that fits their politics rather than examining the facts.

In Ferguson, the race hustlers and their enablers, from Al Sharpton to Eric Holder, turned an unfortunate confrontation that ended in the death of a black man into a cause celebre. Racism did not cause Brown's death. Nor was he the victim of a police execution, as thousands of protestors try to convince us with their "hands up, don't shoot" mantra.

We know from forensics and testimony by African-American witnesses that Brown reached into the police cruiser, sustained a gunshot wound, ran away, with Wilson in pursuit, but then turned back and moved toward Wilson, who shot him. Casings from the officer's bullets and the location of Brown's body when he sustained the fatal shot demonstrate that Wilson was moving backward in apparent retreat at the time of Brown's death.

What happened on the streets of Staten Island between Eric Garner and a group of police officers looks nothing like what happened in Ferguson. Moreover, we know what happened far more clearly because a bystander filmed much of the confrontation. Those images make the grand jury's decision far less understandable. For all of the criticism of St. Louis County Prosecutor Robert McCulloch's decision to release the transcripts and evidence from the grand jury, at least we have some idea of what led to the decision not to indict. In the New York case, we don't have a clue.

What the video shows is a large black man arguing with police officers who are about to arrest him for the alleged resale of individual cigarettes. He is frustrated, angry even. He accuses the officers of harassing him -- he was arrested in an earlier incident on the same charge, the pettiest of offenses, a crime with no victims. But Garner is not a threat, although he resists arrest when a group of officers surround him, telling them not to touch him as he moves backward, not toward the police.

The video clearly shows Officer Daniel Pantaleo grabbing Garner from behind, with the officer's forearm pressed against Garner's neck, and wrestling him to the ground, the forearm against Garner's throat the whole time. I doubt that Pantaleo intended to kill Eric Garner, but that does not mean Pantaleo was blameless. The audio also demonstrates that Garner pleaded with what were by then several officers who held him on the ground, including one who pressed Garner's skull into the sidewalk. "I can't breathe," the asthmatic Garner begs over and over as a bevy of officers hold him down.

Police have difficult, dangerous jobs in which split-second decisions can have deadly consequences. But Eric Garner was no Michael Brown, and the officers who held down Garner -- including, but not limited to, Daniel Pantaleo -- had no reason to fear for their lives as Darren Wilson did.

To pretend that police never overreact or use excessive force is as wrong as to claim racism is usually to blame when a police officer kills a black or Latino suspect. Neither serves the public good.

In the case of Ferguson, the U.S. attorney general and an army of media quickly descended on the town in search of evidence of racism. But the facts didn't comport with their presumption.

It's unclear whether race played any role in what led to Eric Garner's death. At least one of the police officers in the video is black and another appears to be Asian. But racism is not the only motivation for police to sometimes exceed their authority, to use excessive force, even to behave brutally. Police power is an awesome force -- and one that requires reasonable restraint.

One does not have to be a bleeding-heart liberal to find fault with the grand jury's decision in New York City. The facts, not politics, should guide our reaction in both cases.