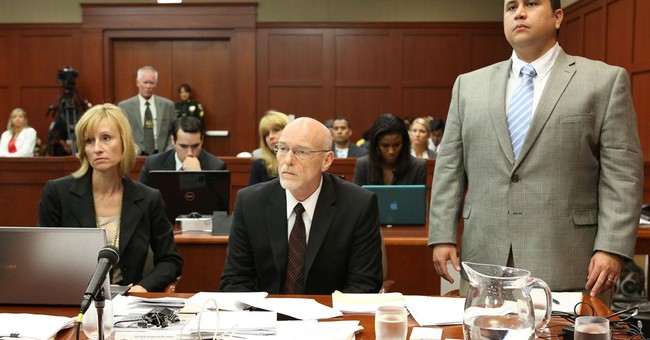 The jury will soon decide the guilt or innocence of George Zimmerman, the man charged with murder in the death of Trayvon Martin, but a verdict will not end the debate about this case that has raged from the beginning.

Like the O.J. Simpson trial nearly two decades ago, the Zimmerman trial has become a litmus test on race. And the media have played a major role in pushing race as the underlying issue, to the detriment of all concerned.

From the beginning, the media played up the racial angle. People magazine's coverage was typical. A cover story in April 2012 featured pictures of Martin's childhood as "an adorable tot," "budding scholar" and at family gatherings where, the magazine noted, "he was always the first to arrive and the last to leave."

Only one photograph in the story showed a version of Martin as the 17-year-old George Zimmerman actually encountered the night he killed him: A framed photo of Martin in a hoodie being held by the teenager's grieving parents.

And that hoodie summarized the prevailing media storyline: "On Feb. 26 Trayvon's unwavering taste for hoodie couture may have proved deadly." In other words, if you're young and black and wear hooded sweatshirts, beware: Crazy white people may try to kill you.

Which comes to the issue of George Zimmerman's race. Zimmerman's picture also appeared in the People magazine story as it did ubiquitously: an unsmiling, unshaved man in an orange, jail-issue jumpsuit. When the first stories appeared, Zimmerman was identified as white; only later, when it turned out that his mother was an immigrant from Peru, did most news stories refer to him as a white Hispanic or white and Hispanic.

While Hispanics may be of any race, the media usually treat the term as if it were its own racial category, so the decision to attach "white" to the designation is not common practice. But the designation was important to making race a central issue in the case. If Zimmerman were simply "Hispanic," or had he been black, then the killing would never have become a national story.

The homicide rate for black males 14 to 17 years old is the second highest of any group -- 31 homicides per 100,000 population, compared with only 4.5 percent for whites of the same age in 2008, the last year for which data are available -- exceeded only by the rate for black males 18 to 25, which was nearly three times higher.

Blacks commit the overwhelming majority of black homicides -- 93 percent in 2008, according to the Bureau of Justice Statistics. But stories of black-on-black crime don't get much play, nor do stories in which perpetrator and victim are from differing minority groups. But portray the killer as an armed, white man in pursuit of any young black male he thinks might be about to commit a crime, and the case becomes a metaphor for white racism.

Will any of this matter to the jurors? We can only hope not. But no matter what verdict they render, the likelihood is many people will view it through a racial prism. In a poll taken in late May, a plurality of blacks, 47 percent, said they believed that Zimmerman should be found guilty of second-degree murder. Whites were far more likely to believe that Zimmerman acted in self-defense, with most whites saying Zimmerman should be acquitted.

Trayvon Martin's killing was a tragedy. But not every killing involving a black victim is about race, even if the person who pulled the trigger was from a different racial group. If the media had stuck to the facts and not played the race card, the debate over this case might have focused more on ways the death might have been avoided -- which would have included both Martin and Zimmerman behaving differently that fateful night. Instead, the media have encouraged young black men to believe they all have bullseyes on their backs.