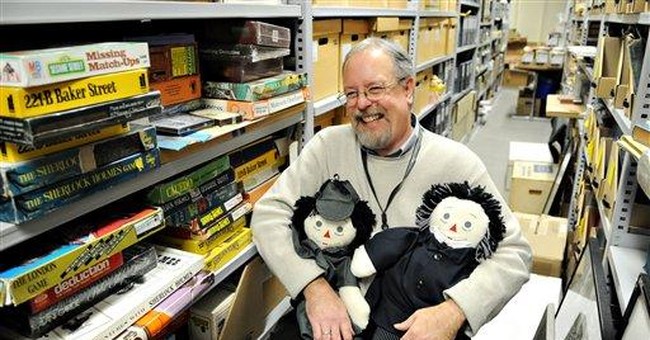 If your friends and family are like mine, you've received at least one of those handy bookstore gift cards under the tree, so here are some ideas on how you might spend them. It's an eclectic list, and not all the books are new. But they happen to be books I enjoyed over the last year, and I'd like to share the pleasure with others.

The first on my list -- "A Safe Haven: Harry S. Truman and the Founding of Israel," by Allis and Ronald Radosh -- is a brilliant account of the President Truman's decision to have the United States become the first nation to recognize the newly created Jewish state in 1948. Given the United States' close relationship to Israel today, it will surprise some readers to learn that Truman's decision was neither automatic nor easy. Truman faced opposition from his own State Department, including the popular Secretary of State George Marshall, as well as from the United States' closest ally, Great Britain. But the haberdasher from Missouri -- encouraged by his former business partner and friend Eddie Jacobson -- stood firm. The Radoshes' gripping book is meticulously researched, which helped it win the Washington Institute's book prize for the best nonfiction book on the Middle East in 2009.

If historical fiction is more up your alley, John J. Miller's novel "The First Assassin" is a great read. Miller's story begins on a train headed toward Washington, D.C., ostensibly bringing President-elect Abraham Lincoln to the nation's capital, as assassins lie in wait. But Lincoln has already made the trip under cover of darkness, aborting what will be a series of attempts on his life by bungling amateurs and hired guns in the weeks following the inauguration. Miller manages to keep readers turning the next 375 pages, even though outcome is never in doubt. He does so by bringing the reader into the heart of the city of Washington in 1861 -- recreating its sights, sounds, even its smells, in such realistic fashion, you feel like you're there. Miller blends historical figures with purely fictional ones and weaves a tale that is exciting and believable, even at its most fantastic.

As the stakes in Afghanistan become ever greater with the addition of thousands more American soldiers on the battlefield there, it's worth recalling the horror that gripped that country during the Taliban's rule. The 2002 novel "The Swallows of Kabul" is written by an Algerian former military officer, Mohammed Moulessehoul, who adopted the feminine pseudonym Yasmina Khadra for this novel. The novel begins with the stoning of a woman, who is first trussed like an animal and then buried up to her waist, while a crowd is encouraged to throw large rocks that have been placed in the public square for that very purpose. "The Swallows of Kabul" is not easy reading, but this excruciating tale reminds us exactly what fate Americans have rescued Afghanistan -- especially its women -- from.

On a cheerier note, another historical novel gave me hours of delight. "The Indian Clerk," 2007, by David Leavitt, takes as its subject the mathematical genius Srinivasa Ramanujan and his relationship with G. H. Hardy, considered the greatest British mathematician of the early 20th century. Ramanujan is a largely unschooled Indian prodigy whose fascination with prime numbers equals Hardy's own, and the book is filled with mathematical esoterica and formula, which sent me to Google on more than one occasion. But it is also a fascinating look at the English intellectual world as the Great War breaks out, with appearances by Bertrand Russell, John Maynard Keynes, Ludwig Wittgenstein, D.H. Lawrence and others who pass through Cambridge during the period. The Ivory Tower has never been portrayed in more byzantine detail than by Leavitt.

Finally, Rosalie Pedalino Porter's book "An American Immigrant: My Life in Three Languages," is a heartfelt memoir by a woman who has played a critical role in the debate over bilingual education in the last several decades. Porter traces her journey from her native Italy to New Jersey during the Great Depression and her eventual emergence on the policy scene. Having started her career as a bilingual education teacher, she came slowly to the realization that teaching immigrant children in their native language was a tremendous disservice to them. She eventually became a leader in the fight to replace bilingual instruction with English immersion and an advocate for children who, like herself, started life speaking a language other than English. Porter's previous book, "Forked Tongue: The Politics of Bilingual Education," is a classic on the subject.

These books may not have made it on the best-seller lists, but I guarantee good reading if you give them a try.