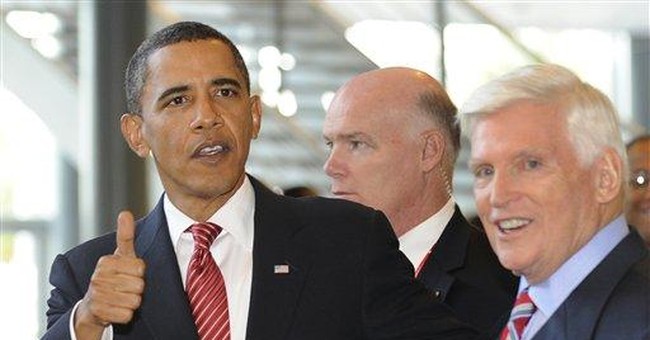 The Commonwealth of Massachusetts hardly seems a likely setting for rampant sex discrimination in state hiring, but apparently the Obama administration doesn't agree. The Justice Department this week filed suit against the state and its Department of Corrections, alleging they have engaged in a "pattern or practice of discrimination against female applicants for entry-level correctional officer positions."

So what exactly constitutes this discrimination? Apparently, female prison guard applicants have a more difficult time passing a required physical abilities test (PAT) than their male counterparts, which is unacceptable to the Obama Justice Department. "Bringing an end to practices that have a discriminatory impact on the basis of sex," says the press release touting the suit, "is a major priority of the Justice Department and Civil Rights Division."

It wasn't all that long ago that the very idea of hiring women to guard violent men -- even if they were behind bars -- would have been thought unwise if not downright crazy. But we've learned that women can do non-traditional jobs, even excel at them. And we've been reassured by feminists that women would ultimately demonstrate they could perform these jobs just as well as men.

But a funny thing happened on our way to wiping out gender differences. Men, on average, are still bigger and stronger than women. So any job that requires physical strength will find fewer women than men in its ranks. That doesn't mean there aren't some women who outperform some men in physically demanding roles, but it does mean that you're likely to see more men than women pass tests that require high-level physical strength.

Which brings us back to Massachusetts and its Department of Corrections. My colleague at the Center for Equal Opportunity, Roger Clegg, attempted to find out why the Justice Department believes that the PAT "is not job related and consistent with business necessity" and is therefore discriminatory. But no one would talk about the case since it is now in litigation. So he went looking for a description of the offending test and what he found online demonstrates just how topsy-turvy the world of anti-discrimination law has become.

According to a Corrections Department pamphlet describing the PAT, applicants are tested on the skills necessary to respond to a hypothetical prison disturbance that has broken out in a building across the prison compound. They have to show they can run the length of the prison campus, climb flights of stairs to the top floor of the prison, remove fallen prison guards or inmates by pulling them to safety and putting them on stretchers, and, finally, restrain violent inmates.

The actual test includes several steps, including removing a "fallen Officer (weight 185 pounds) from the scene," which is demonstrated by dragging "an 85 pound mannequin and 100 pound box, both placed on a sheet, for a distance of 25 feet on a smooth tile or concrete floor." Another part of the test requires that the applicant lift the 85-pound mannequin from the floor and carry it a distance of 100 feet," the equivalent of lifting and carrying, with the assistance of another officer, a 170-pound body.

In 2007 and 2008, according the Justice Department's press release, 96.3 percent of male applicants for correctional jobs passed the PAT, but only 58.8 percent of female applicants did so. But are the lower pass rates for women the result of discrimination? Hardly. They simply reflect that a higher percentage of men than women are capable of, say, lifting and carrying 85 pounds of dead weight or dragging 185 pounds across the floor, especially after having run a half-mile on a treadmill at 5 mph and spending three minutes on a stair-stepper at a pace of 96 steps per minute.

The Justice Department has no business forcing prisons to hire women (or men) who can't help quell a prison disturbance or come to the aid of their fellow officers. Such hiring seems dangerous at best. It puts lives at risk, including the women hired. It's not sex discrimination but common sense for Massachusetts and other jurisdictions to continue to use such tests.