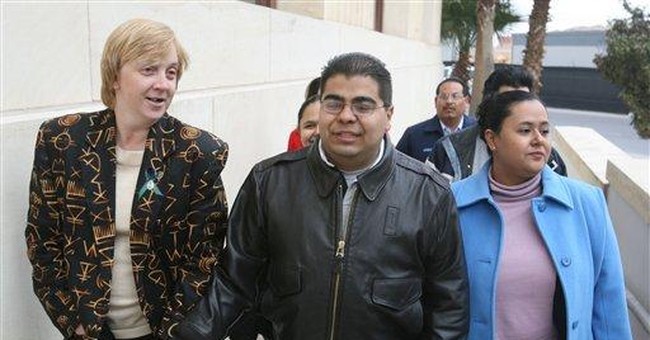 A new report out this week from the Pew Hispanic Center confirms what many observers already suspected about the illegal immigrant population in the United States: It is made up increasingly of intact families and their American-born children. Nearly half of illegal immigrant households consist of two-parent families with children, and 73 percent of these children were born here and are therefore U.S. citizens.

The hard-line immigration restrictionists will, no doubt, find more cause for alarm in these numbers. But they should represent hope to the rest of us. One of the chief social problems afflicting this country is the breakdown in the traditional family. But among immigrants, the two-parent household is alive and well.

Only 21 percent of native households are made up of two parents living with their own children. Among legal immigrants, the percentage of such households jumps to 35 percent. But among the illegal population, 47 percent of households consist of a mother, a father and their children.

Age accounts for the major difference in household composition between the native and foreign-born populations: Immigrants, especially illegal immigrants, tend to be younger, while the native population includes large numbers of older Americans whose children have already left home. But out-of-wedlock births and divorce, which are more common among the native born -- especially blacks, but also Hispanics and whites -- also mean that even young native households with children are more likely to be headed by single women than immigrant households are.

But the greater concern for some opponents of immigration -- legal and illegal -- is the fear that these newcomers will never fully adapt, won't learn English, will remain poor and uneducated, and transform the United States into a replica of Mexico or some other Latin American country. The same fears led Americans of the mid-19th century to fear German and Irish immigrants, and in the early 20th century to fear Italians, Jews, Poles, and others from Eastern and Southern Europe.

Such worries are no more rational today -- or born out of actual evidence -- than they were a hundred years ago. It is true that Hispanic immigrants today take awhile to catch up with the native born just as their European predecessors did, and illegal immigrants never fully do so in terms of education or earnings. But there is still some room for optimism in the Pew Hispanic report. Nearly half of illegal immigrants between the ages of 18-24 who have graduated from high school attend college. A surprising 25 percent of illegal immigrant adults have at least some college, with 15 percent having completed college.

The inflow of illegal immigrants has slowed substantially since the peak, which occurred during the economic boom of the late 1990s, not in recent years, contrary to popular but uninformed opinion. The Pew Hispanic Center estimates there are nearly 12 million illegal immigrants living in the U.S. now, a number that has stabilized over the last few years as a result both of better border enforcement and the declining job market. As a result, there might never be a better time to grapple with what to do about this population than right now.

The fact that so many illegal immigrants are intertwined with American citizens or legal residents, either as spouses or parents, should give pause to those who'd like to see all illegal immigrants rounded up and deported or their lives made so miserable they leave on their own. A better approach would allow those who have made their lives here, established families, bought homes, worked continuously and paid taxes to remain after paying fines, demonstrating English fluency, and proving they have no criminal record. Such an approach is as much about supporting family values as it is granting amnesty.