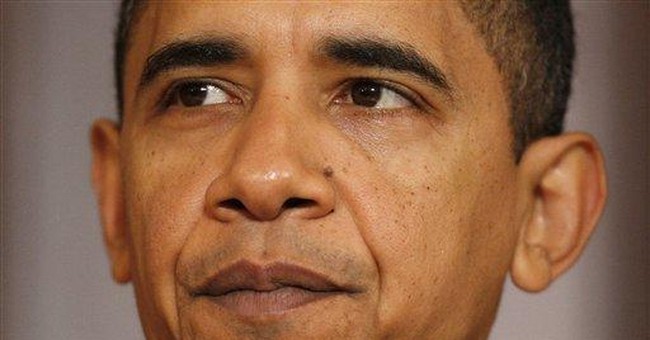 Hubris is the word that comes to mind as I listen to President Obama lay out his plan to rescue the economy, create 4 million jobs, halve the deficit in four years, and give quality health care to every American. The man has big ambitions and an even bigger ego. It has been one of the most troubling aspects of his character as it has emerged on the national scene in the last two years. He seems, almost literally, to believe he walks on water. No one -- no matter how talented -- could accomplish a fraction of what Obama has planned in a good economy, much less the weakened one we have right now. Worse, he thinks he can do this simply by taxing the rich, a fantasy only someone who knows nothing about human behavior, much less the U.S. tax system, could possibly believe.

This is what the president has planned in the health care arena: $634 billion as a down payment on a new system that would provide insurance to those uninsured Americans, about 47 million people at last count. Sounds great -- except when you consider who is going to pay for it. About half the money, the White House claims, will come from tax increases on the wealthiest 2 percent of Americans, those earning $250,000 a year or more, and savings from already existing health programs. But the math doesn't add up. There simply aren't enough rich people to pay for the Democrats' plans, even if the president could figure out a scheme to confiscate every penny the rich now earn.

But there'd be no rich people left for a second or third or fourth year of such a scheme. We've seen this kind of plan before, in Stalin's Russia and Mao's China -- free health care, yes, but of universally lousy quality and living standards for everyone that would make the poorest Americans look rich by comparison.

I'm not suggesting President Obama is a communist, but he is a utopian -- and that's the danger. He wants to create a perfect society in which the state takes care of everyone in need. It sounds wonderful -- but the road to economic ruin and loss of liberty is paved by well-meaning men with good intentions.

The rich -- as liberals like to call them -- are the people in this society who earn enough to invest and create jobs so that all the rest of us can live decently. A couple earning $50,000 a year with two kids doesn't have money left over after paying the bills to invest in the stock market or even hire one part-time worker at minimum wage.

Small and medium-size businesses create most of the jobs in our economy, and the people who start and run those businesses are the very taxpayers Obama is targeting. He says he's going to cut the deductions these people take on their tax returns by about 20 percent -- which means they'll have less to pay their employees and less incentive to hire new ones.

And the worst part of Obama's plan is that it will actually increase the deficit, not halve it as he promises. When individuals have disincentives to earn more money because Uncle Sam will take more of every extra penny they earn, they do the natural thing: They cut back on work. And when they earn less, they pay less in taxes. Obama's plan will mean a rush to the bottom -- where government incentives give the biggest rewards to those who produce the least. Pretty soon there won't be anyone to foot the bill.

Maybe if President Obama had spent time in the real economy, not simply as the recipient of government or nonprofit paychecks his whole life, he'd be a little less confident in his utopian plans.