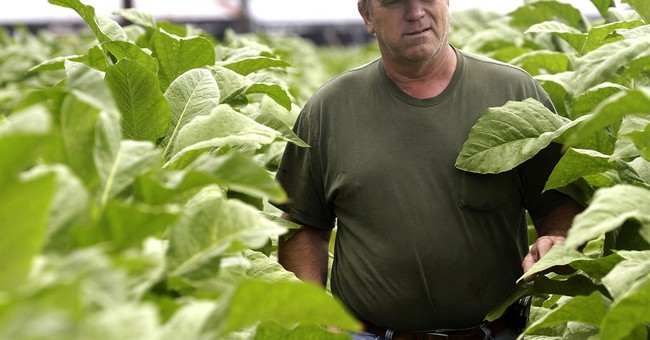 As part of its ambitious “No American Left Unscrewed” Plan, your friends and protectors at the federal level have found another concession on which to muscle in: Farmer’s markets. In a perfect film noire scene, you can almost hear the words “Nice small farm ya got here, Mac. Be a shame if something happened to it.”

According to the group Local Harvest the new regulations under the Food Safety Modernization Act which was passed back in 2010. The act was passed to keep food produced by industrial agriculture safe. That move, in and of itself was a good idea. Another good idea was the exemption given to smaller farms. That exemption meant that these small farms did not have to cope with the long list of regulations that the industry must follow. That exemption is going away. Now some will say fair is fair, if the industrial ag folks have a list of rules to keep people safe, so should the small, or hobby farmer. But can we try for some perspective here? There is a few light years’ worth of distance between a factory farm with hundreds acres of chemically processed produce that will go into bagged salads or thousands of chickens jammed into cages that will go into plastic wrap; and the guy or gal with a few acres of vegetables and twenty or so chickens who hauls the fruit of his or her labor to the local farmer’s market on Saturday mornings.

The rules, which will require government inspections of local produce and meat, and will also require a fee for the small farmer to be able to sell the product do not in reality apply to 90 percent of the farmers out there, since they are not producing the high-risk foods that require the stringent requirements of the FDA. On top of that Cornucopia Institute notes that even the FDA has admitted that the application of the rules will put some medium and small farmers out of business. And on top of that the rules won’t do a blessed thing for food safety, since the small to medium farmer is not the one breaking the rules. The rule breakers, says the Institute, are the factory farms and uninspected imports. I talked to one small farmer who is anticipating coughing up around $4700 a year to sell his produce, which will go under the FDA microscope and isn’t optimistic about his future.

The upshot of this, according to Local Harvest is the shuttering of more farms and fewer options for those who might want food gracing their tables that is not full of hormones, or chemicals.

Now some may be wondering why I am standing up for small farmers and farmer’s markets on Townhall. Good question. And I remember a few years ago when liberals were getting steamed over conservatives becoming interested in organic foods.

But my point is not that conservatives need to work their way in to what is traditionally left-wing turf. My issue here is that the government is extending its command and control even further and deeper into American life. And as a proponent of the free market, I believe in the little guy making a living on his own, and I also believe in good products being sold at a fair price. If someone wants to buy their food at a box store, that’s their business. And if they want to buy it at a farmer’s market, that is their business as well, and not the government’s.

And the overreach does not just apply to butter, eggs and vegetables. I also spoke with a man who wanted to sell handmade leather goods to craft shows and well, farmer’s markets. It was going to be a sideline, not a major career shift, and there was no way this one man would have ever impacted the leather industry. He just wanted to make a few bucks doing something that he loved. By the time he was done perusing the laws, regulations, fees, OSHA requirements that he would have to submit to for a business he was going to run out of his garage, he decided it just wasn’t worth the misery.

This situation is by no means as big a debacle as Benghazi, the IRS scandal or Fast and Furious were. Nor is it as big a fiasco as the ever evolving healthcare circus. But the government is getting a little bit bigger and the average American is getting a lot smaller. As usual.