Cruz Lost the Battle, but the GOP Has Been Losing the War for Years 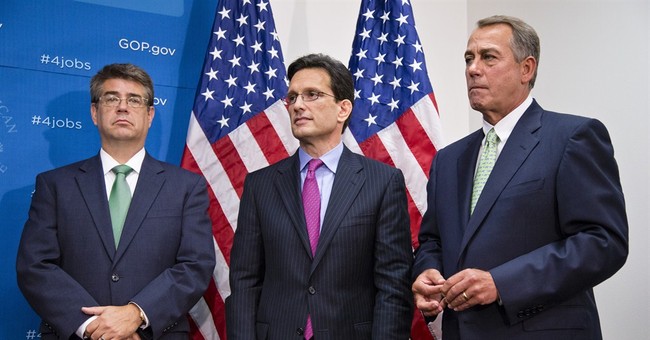 Yes, I know, it is over. Lee and Cruz got schooled in the art of statecraft, largely by a group of Republicans who seem to have never mastered it themselves. It is even becoming trendy among pundits to quote Luke 14: 31-32: “Or suppose a king is about to go to war against another king. Won’t he first sit down and consider whether he is able with ten thousand men to oppose the one coming against him with twenty thousand? If he is not able, he will send a delegation while the other is still a long way off and will ask for terms of peace.” How nice it is to see conservatives using the Bible to make sure we all see them sitting at the cool kids table. Let’s add some more faces to Mount Rushmore as long as they’re all sitting there.

Lee and Cruz may have lost battle, but the GOP elite have been losing the war for years now. I can’t blame them for running away. After all he who fights and runs away lives to grovel another day. And to be fair, this crop of Leftists are nastier, more vindictive, more prone to lie and more apt to throw a tantrum (and get away with it) than any libs who have come before. So naturally the, upper elephants of the Grand Old Co-Dependent Party shows its throat and hands their nemesis a win, under the guise of being the adults.

“Being the grownups” was a notion put forth repeatedly by Orrin Hatch when I interviewed him on Monday. After saying this week that Lee and the Tea Party need to be rehabilitated, Hatch said that Lee had time to show his constituents that he is ”worthy of being re-elected. Hatch told me he did not see a pathway to stopping Obamacare through a shutdown, but called the shutdown an “exercise” to discuss the pending financial disasters from Obamacare and runaway spending.

Well, if we can’t win through making a stand then how do we win the fight against the ACA and spending? Hatch said by electing more Republicans. Well, okay, what have we gotten from the Republicans we have?

That’s a question, not a lead-in to another thought. What have we gotten?

The White house dug in its heels, and began closing everything in sight. It shut down WIC, and hunted Social Security would be next. The Democrats threw a fit and the Republicans were frightened enough to eventually cave. After all they posit, no one wanted the United States to default. That might cause other countries to lose confidence in us. Countries like China who want the world to move away from the dollar and toward the Yuan. But other countries have been suggesting that for over a year now, indicating to me that they are trying to brace for an American default anyway, no matter how far we extend our own credit. Maybe I just read different news articles then the GOP. And so, we want to hike the debt ceiling to avoid going broke?

When the MSM and the Democrats were carrying on about the Shutdown, and guys like Lee and Cruz were taking in the underside of the political bus, perhaps that would have been the time for that discussion Hatch was talking about. As Obama was shedding crocodile tears in a letter to federal employees closing down WIC, the Codependent Party might have brought up a few salient facts.

For example, on the day of the Shutdown the White House allocated $445 million to the Corporation for Public Broadcasting. To hell with federal employees and WIC mothers, gotta fund that CPB propaganda machine. That same day, Treasury paid $119 million on the interest on the government debt. Oh, did I mention the $445 million given that same day to HHS? Gotta feed the Obamacare monster (By the way the administration has exempted itself from the individual mandate for the next three months.)

Or how do you like these bananas: $745 thousand to test breast milk composition using infant feces. And then there is the $50 thousand to study bugs that visit poppy flowers. Or the $600 thousand to track bats by radio. Not to mention the HHS project to introduce family planning to the Navajo Nation, whose population has been on the decline for years. Now granted, these are small numbers in the big scheme of things. But I could write a column a day for a month just on the subject of ridiculous spending. So why didn’t Republicans take the “discussion time” to point out they if we really did cut the pointless, needless, make-work, justify-your-job spending we might be able to at least make a hole in the debt? After all, if all it does is justify your elected or appointed position, why wouldn’t the folks in Congress want to cut…Oh…never mind.