Lili Carneglia
|
Posted: May 17, 2018 12:01 AM
Share   Tweet
The opinions expressed by columnists are their own and do not necessarily represent the views of Townhall.com. 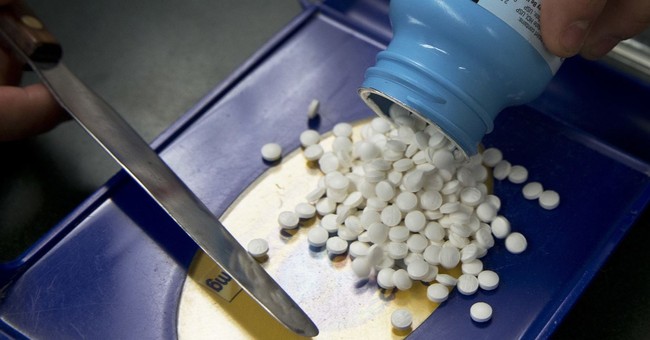 Last week, President Trump unveiled his “American Patients First” proposal as a solution to the problem of growing healthcare costs in the United States. Some have criticized Trump administration policies intended to roll back Obamacare provisions for leaving the average American on the hook for bloated healthcare expenses, and this new plan should combat those attacks. However, the timeline-lacking policy suggestions will likely have little to no effect on the market for prescription drugs.

The outline emphasizes four main courses of action named increasing competition, better negotiation, incentives for lower pricing, and lowering out-of-pocket costs. Each of these strategy sections include immediate and future actions HHS can take that range from improving Medicare to working with Intellectual Property Enforcement to prevent potential “foreign free-riding.” While the proposal maintains guarantees to lower the burden on the average consumer, solutions intended to combat the pharmaceutical companies’ growing power over the industry were noticeably absent. Unfortunately, the new HHS proposal seems to provide a variety of complex solutions that do little to put American patients first.

Trump is no stranger to calling out the pharmaceutical industry for their unfair pricing, accusing them of “getting away with murder.” That criticism has made for some unlikely allies. Democrat Senator Bernie Sanders tweeted his agreement with the President’s criticisms in late 2017. However, Sen. Sanders seems keener to put concrete solutions into action than the president.

Increasing consumer access to pharmaceuticals via imports is the easiest way to increase competition in this market. These policies’ foundation in free-market principles coupled with the promise to end corporate exploitation have won them massive bipartisan support. Among the most notable bills came from Sen. Sanders in early 2017 to allow prescription drugs to be imported from Canada. Unfortunately, progress on this and similar policies seems incredibly slow, and the Trump administration’s solutions are completely toothless in comparison.

Despite one of the pillars of the American Patients First program being titled “Increased Competition,” some of the concrete policy proposals suggest just the opposite. Missing from the proposal were policies that allow the import of foreign products, and instead seem to include more regulatory obstacles like requiring pricing disclosures in advertisements. Opening up the industry to free trade is the simplest, most organic way to increase competition the way Trump says he wants to. Allowing American consumers more choice in the pharmaceutical market puts pressure on American companies to provide low-cost, effective alternatives to the cheap imported equivalents if they want to continue to profit.

Unfortunately, Trump’s Department of Health and Human Services seems to think that “increased competition” means strengthening the regulatory barriers already in place. Other initiatives include creating new policy to “promote innovation,” though the mechanics of that policy initiative are still unclear. These suggestions leave supporters scratching their heads trying to figure out how “better” and increased state intervention in the pharmaceutical industry even remotely resembles the increased competition promised. Why waste time, energy, and taxpayer dollars coming up with regulatory solutions when opening up to free trade has been a solution many states have been begging the federal government to allow for years?

Pharmaceutical industries love the protectionist policies that have bolstered their market standing for years. Protectionism always “protects” industry producers at the expense of the consumer, creating massive market losses. This is the result that we have seen play out in the United States for years. The burden on consumers to pay for prescription drugs has been growing while domestic sellers have been enjoying the benefits. If President Trump is not willing to end the cronyism that Americans have been paying for, he should rename his proposal to “American Pharmaceutical Industries First.”

Pharmaceutical companies have been vocally opposed to any policy that would open the market to increased foreign competition, denouncing these suggestions for the possibility that they might create public health threats. “Proposals to allow the importation of prescription medicines from Canada ignore the dangerous threat to patients of counterfeit and adulterated medicines,” writes PhRMA, a trade group representing pharmaceutical companies. A more likely threat? The companies represented by these special interest groups might suffer losses if they can’t compete in the global economy.

Unfortunately, that is a cruel reality of increased competition: if producers do not provide the best, safest, lowest cost products for consumers, they do not survive. The upside is that the consumers who have been squeezed for years for domestic producers’ benefits might finally be afforded some breathing room as they are offered cheaper, imported alternatives. A small price to pay if you ask a growing number of bipartisan policymakers. Big Pharma recognizes this threat to their welfare and has gone to great lengths to guard against it. The “American Patients First” solution is the vague and limited result of compromise between special interests and Trump’s campaign promises. Unfortunately, American patients were not offered a seat at the table, so they are left with only softball policies masquerading as increased competition.The pharmaceutical industry’s increased stock prices following the announcement are proof that these policies will have little effect on the market.

If Trump is serious about putting American patients first, it is time to end the era of policies that have developed the bleak market landscape. Trump was right to call out the “gravy train” of special interests. Unfortunately, without major changes to his policy prescriptions, the American Patients First proposal will do little to derail it.

Lili Carneglia has a master’s in economics from the University of Alabama. She has taught economics at the university level and is a Young Voices Advocate.

Trending Townhall Video
Salon: Actually, 'Latinx' Is Not Inclusive
Spencer Brown
The FBI Lied to a Judge So They Could Bust Open Thousands of Safety Deposit Boxes
Katie Pavlich