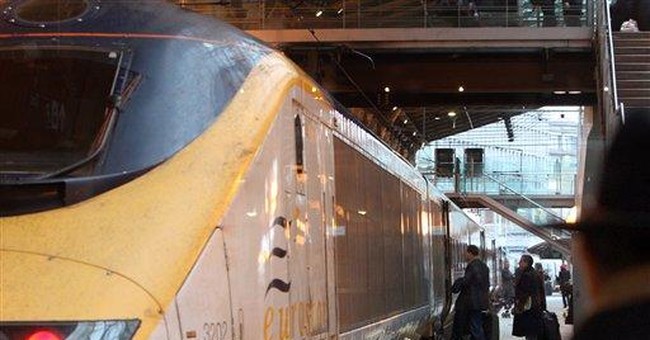 After a $787 billion stimulus and a $940 billion health care bill, one might think the time had come to take a vacation from profligate spending on vaporous ideas. Unfortunately, one would be wrong.

High-speed rail construction—for which President Obama initially devoted an $8 billion “down payment” (read: more on the way) from the stimulus, plus an additional $5 billion over five years—has begun in several scattered corridors across the country. But the president’s “vision for high-speed rail in America” is in fact a vision for wasting additional billions of federal and state dollars.

Obama announced in January how the incipient $8 billion would be divided. The biggest winners were two high-speed rail routes, one in Florida and one in California. In Florida, a line designed to span the 80 miles between Tampa and Orlando took in $1.25 billion of federal money, and in California, a proposed system that would eventually connect Sacramento, San Francisco, Los Angeles, and San Diego, collected $2.3 billion of Uncle Sam’s largesse.

But the newest, inflation-adjusted estimates put the cost of building just one phase of California’s bullet-train system, between L.A. and San Francisco, at a whopping $42.6 billion. It is unclear who will pay.

In November 2008, in the midst of a massive state budget shortfall, a worldwide economic crisis, and home foreclosures galore, California voters approved Proposition 1A, a $10 billion bond measure to get their high-speed rail project started. But $10 billion is not $42.6 billion. Under what stone does the state think the remaining requisite $33 billion lies?

Under several hypothetical stones, it seems. California’s high-speed rail designers say they expect to receive about $18 billion from the federal government. Maybe. Yet Washington has donated but $2.3 billion thus far. The state also purportedly expects to receive $12 billion from private investors, but this troop of generous sugar daddies has yet to materialize.

Nonetheless, the project is moving forward. Californians, whose state’s budget gap is currently at $20 billion, might wonder how much more they will be asked to pay to get high-speed trains rolling. (Who will pay to keep the trains rolling is another problem altogether.)

Comparatively, the cost to build a Florida high-speed rail line between Tampa and Orlando is small—an estimated $3.2 billion. But that $3.2 billion is a total loss because nobody will ride the thing.

Potential passengers will be dissuaded from hopping aboard because the route won’t take them anywhere near their final destinations. Good public transportation in Tampa and Orlando is nonexistent, and so it would seem essential that any rail system connecting those two cities deposit its riders in central, urban locations. The planned route does not do this. In fact, to call it a Tampa-Orlando route is rather disingenuous because the trains will avoid Orlando entirely—the last stop heading east is Orlando International Airport, some ten miles outside of town.

And while it is estimated that the train ride will last 55 minutes with stops, it takes only 90 minutes to drive the same distance. If a potential high-speed rail passenger in Tampa factors into his trip the time required to get to the city’s train station (which could easily take an hour), park, purchase tickets, and wait for the train, he would probably decide to drive to Orlando. If he then considers that were he to take the train he would arrive not in Orlando but at Orlando International Airport, which could leave him tens of miles from his final destination, and that he would arrive there without a car and with no good way of getting around the city, he would definitely decide to drive to Orlando.

The Florida Department of Transportation estimates 2,715,500 annual passenger-trips in the Tampa-Orlando line’s first year of operation and 3,120,000 in its fifth year. Those numbers are wildly hopeful and won’t be met, and Floridians will find themselves stuck paying the ongoing operating costs of a bullet train that nobody uses.

It is telling that these two improvident proposals, in Florida and California, are the Obama administration’s high-speed rail showpieces.

Americans have recently digested multiple federal expenditures of hundreds of billions of dollars. Is it possible that the country’s taxpayers, many of whom will never in their lifetimes ride a bullet train, will remain unbothered as tens and probably hundreds of billions of dollars more are allocated to half-baked high-speed rail experiments? Unlikely.