Lawrence Meyers
|
Posted: Sep 30, 2018 12:01 AM
Share   Tweet
The opinions expressed by columnists are their own and do not necessarily represent the views of Townhall.com. 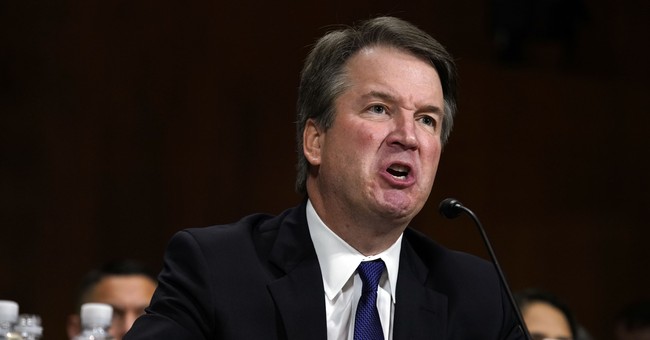 The past week has been one of the most emotionally challenging periods in America during my lifetime.  While things have not exactly been rosy the past twenty years in this country, last week pinned the needle.  In fact, the needle appears to have been broken.

While the stakes are extraordinarily high in the Kavanaugh confirmation process, the seismic rupture between supporters of Judge Kavanaugh and Dr. Ford seems to have exceeded that of Trump vs. Clinton.

What’s going on? Why are we launching nuclear warheads at each other over this particular issue?  Why has the vitriol and anger exploded to this extent?

This is not an opinion on who allegedly did what to whom, or who is believable or who is not. This is about understanding why the country is exploding.

It comes down to what Sigmund Freud called transference, and it is occurring on a collective level.  Kavanaugh and Ford are not seen as people.  They have become substitutes for the unconscious redirection of feelings from tens of millions of people.  Lightning rods, if you will.

Michael G. Conner, Psy.D., says that, “During transference, people turn into a 'biological Time Machine.'" A nerve is struck when someone says or does something that reminds you of your past. This creates an "emotional time warp" that transfers your emotional past and your psychological needs into the present. A transference reaction means that you are reacting to someone in terms of what you need to see, what you are afraid of, or what you see when you know very little about the person. This all happens without you knowing why you feel and react the way you do.

We saw this in the O.J. Simpson murder trial.  The black community, especially following the Rodney King beating, rightly felt that they had been subjected to decades of injustice.  The community collectively transferred this emotional past onto Simpson as the unjustly accused Black man, and Detective Mark Fuhrman as a racist cop intent on framing Simpson.
If you lived in Los Angeles at the time, as I did, you could feel the extraordinary tension seep through every street and alleyway during the trial.

At the time, 67% of blacks believed Simpson was not guilty.  The media, the jury, and the black community didn’t want to discuss Simpson and evidence concerning him.  They were all about Mark Fuhrman.  He was a racist and that was enough.  That’s collective transference at work.

Indeed, in Ezra Edelman’s outstanding documentary, “OJ: Made in America”, juror Carrie Bess is asked, “Do you think there are members of the jury that voted to acquit OJ [Simpson] because of Rodney King?”  She answers “yes”.  Then:

In PBS’ Frontline special, “The O.J. Verdict," community activist Kerman Maddox said, “…a lot of people in the black community thought absolutely it was payback. A lot of people would say, ‘yeah it was payback because for years and years and years we have not had anything close to justice in that system. Now you, white America, you now know what we've been going through for years.’ So yeah, payback, ‘Take it.’”

We witnessed collective transference again this past week. This time, it is women who rightly feel that they have experienced decades of abuse, much of it suffered in silence, and the matter has hit exactly during the overdue #metoo revelations.

Take a look at the headlines across the Liberal media.  Few, if any, examine the veracity of Ford’s testimony.  As with O.J., the transference creates a presumption of righteousness, so why bother examining it?  Instead, we see headline after headline, and op-ed after op-ed attacking and demeaning Kavanaugh, just as Fuhrman was demonized.

The encounter between Charlie Kirk and an unidentified woman in this video encapsulates the transference concept.  Kirk is arguing a point about presumption of innocence, yet the woman says, “People like you are everything that is wrong with everything.  You believe in s***ting on every woman in this country… you are embarrassing to humanity…why on earth would you be here and do this to the women of this country?”

She doesn’t see a person.  She is engaging in transference and sees an abuser, because all men who do not immediately accept Ford’s account, or are even on the fence, get an earful of transference vitriol directed at them.

What of the men who take Kavanaugh’s side?  There is transference here, too.  American men place value in their accomplishments – job, family, parent, husband, career, and reputation.  To us, Kavanaugh represents the man who has accomplished great things and risks losing it all – and our identity along with it – to the injustice of being wrongly accused.  Look to John Proctor in Arthur Miller’s The Crucible.

The solution to this problem is the same as the solution to almost every problem facing Western culture -- adherence to a core set of societal values that places the dignity and worth of human beings above all else.

And we know which set of values I’m talking about.

Spencer Brown
Report: US Officials Intercept Illegal Immigrants at the Border. No, Not That Border...