Lawrence Meyers
|
Posted: Apr 23, 2018 2:50 PM
Share   Tweet
The opinions expressed by columnists are their own and do not necessarily represent the views of Townhall.com. 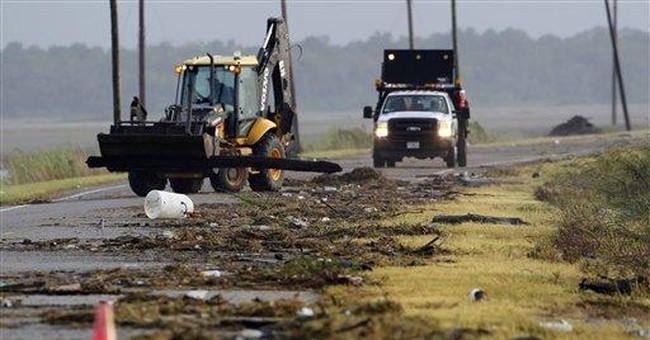 The difference between a state government being in good financial health and one that is in dire trouble always comes to down to one thing: spending.  So any opportunity a municipality has to engage in a public-private partnership, they should fall over themselves to do so.

There’s a reason President Trump has pushed private sector infrastructure investment as an important option to rebuild America’s crumbling roads and bridges.  However, some states, even deep-red Alabama, are pursuing the opposite approach, and we’re witnessing the terrible implications of a corrupt Big Government approach.

The Alabama Department of Transportation (ALDOT) is providing a terrible example along the Gulf Coast.  State Republicans are pursuing the opposite of Trump’s approach.  Rather than working with existing private sector partners to expand transportation infrastructure in rapidly-growing Baldwin County, ALDOT is pushing for an unnecessary and expensive new bridge over the Intracoastal Waterway, purportedly to “bankrupt” the owner of a privately-owned bridge a couple of miles away.

ALDOT, presumably (and ironically) at the behest of a Republican governor, wants to blow through as much as $87 million in taxpayer money, instead of permitting the actual owner of the existing toll bridge to expand it and pay for it with tolls – just as the bridge is already set up to do.

Alabama’s budget was in crisis in 2012, requiring the state, under then-Governor Robert Bentley, to borrow $437 million, hike taxes and cut Medicaid. Now the state’s infrastructure mix is Montgomery’s top concern.

As one Alabama author puts it: “Over 1,200 of our bridges are structurally deficient, and thousands of miles of roads are congested and unsafe…This is deeply embarrassing, and we’re counting on our leaders in Montgomery to fix it.”

One of the key needs, agreed upon almost unanimously across Alabama’s political spectrum, is rebuilding the I-10 bridge over Mobile Bay. This billion-dollar project will require significant private sector investment, as well as federal dollars. It is not only a key focus for both voters and policymakers, but an opportunity for Alabama to fulfill President Trump’s vision of infrastructure partnerships between the public and private sectors.

Yet ALDOT thinks spending $87 million on a bridge – for the express purpose of harming a private investor – is a good idea. What impact will this have on Alabama’s ability to attract private investment for projects like I-10?

The Gulf Coast beach cities of Orange Beach and Gulf Shores has been experiencing increased tourism, and its economy has been booming as a result. The area is attracting more businesses, homeowners, and vacationers.  The area is now so popular that roads on the Gulf side of the Intracoastal Waterway, a canal that separates the coastal island from the rest of Alabama are heavily congested.

Yet, rather than address road traffic, ALDOT is using congestion concerns to push for a third bridge over the Intracoastal (which, perversely, would dump more traffic onto overburdened roads – but that’s for another column).

The Gulf Coast is currently served by two bridges: One, on I-59, is free and publicly owned.  The other is a privately owned and operated bridge called the Foley Beach Express bridge, which collects a $2.75 toll (down from $3.50 until September) which financed both the construction of bridge, and its ongoing operation and maintenance.

The Foley Express owner, American Roads, is prepared to invest $5.3 million in the existing bridge by adding a third reversible lane and funding other efficiency improvements, such as replacing the toll plaza with electronic tolling. And if bridge congestion ever truly becomes an issue, the company is contractually obligated to build an entirely new bridge at zero cost to taxpayers.

Yet for reasons that are either utterly irresponsible or marinated in politics, the ALDOT Director, John Cooper, wants to raid state funds to build a free bridge. Except it isn’t really free.  Taxpayers foot the bill.  Worse, taxpayers all across the state will foot the bill, for a bridge they will never use.  Why is Cooper insisting on taking money away from vital other resources when a private company will gladly not only take on this job, but even build a completely new third bridge?

Maybe because Cooper was appointed by disgraced former Gov. Robert Bentley, and believes in the politics of personal vendettas rather than prioritizing the needs of taxpayers. This kind of poor decision-making certainly feels political.  What else would we expect from a man who openly admitted that he spiked $100 million in road projects as political payback?

Cooper’s vendetta is turning into a political morass for Alabama’s leaders for a number of reasons.

It’s further endangering the political brand of Alabama Republicans. The state has been swept up in a seemingly unending cascade of political corruption scandals, mostly involving Republicans.

The GOP is supposed to be the thoughtful steward of taxpayer dollars, yet former statehouse Speakers, the most recent governor, former Members of Congress and GOP lobbyists have been charged with ethics scandals involving massive wastes of taxpayer dollars in recent years.

Cooper’s $87 million project is invoking memories of the man who hired him, Gov. Robert Bentley. The current governor, Kay Ivey, would surely prefer to avoid such comparisons as she approaches a Republican primary for the right to keep her job.

It’s also harming the prospects of a feasible I-10 bridge project, on two fronts.

First, locals are beginning to grumble about trusting ALDOT to do anything under this leadership, even a project as important as the bridge over Mobile Bay.

Second, potential private sector partners are surely going to think twice about investing in such a project only to have the rug pulled out from under them by Cooper and his bosses in Montgomery.

We have seen this chilling effect in countless states, where hostile politicians cause investors to think twice before bringing dollars and jobs to local economies.