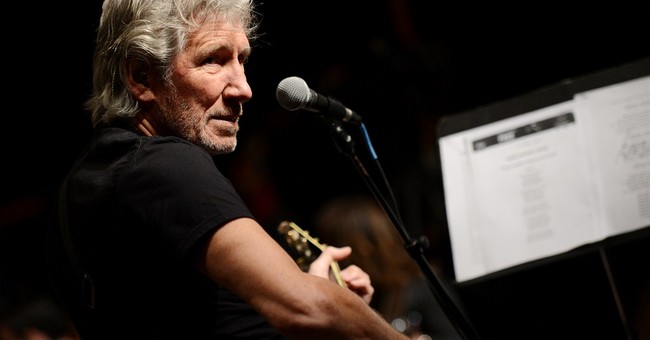 “The world hates the Jews. In or out?” – David Mamet

Well, Roger Waters is an Anti-Semite. He literally spouts one falsehood after another, and when I challenged him on his Facebook page, his only response was, “Brainwashed to the best”. That’s always the case when a fool is presented with facts, like dead children whose blood is on Mr. Waters’ hands.

Perhaps Roger Waters can find the error of his ways. Gideon Levy asked if Waters’ listens to the Israeli side of the issue. He claims, “Okay, tell me what it is and I’ll listen.”

Waters’ continued insistence that Israel is an occupying power on land belonging to someone else is the longest-running contemporary anti-Semitic myth. And yes, it’s anti-Semitic, because we are talking about a country created specifically for the Jewish people. In 1948, the United Nations partitioned what was then called Palestine, into two states: one for Jews, and one for Arabs. Arabs in the region were given an opportunity to live in peace with their own land.

The Jews accepted it. The Arabs rejected it, and immediately made war on the Jewish state. Israel subsequently signed peace treaties with all of its neighbors, all of which agreed to Israel’s drawing of its borders (“the Green Line”).

And the people of

Israel withdrew all troops and settlements from the Sinai Peninsula, which it won when Egypt attacked her in 1973. Israel shut down settlements in the West Bank. Israel withdrew unilaterally from Gaza in 2005, going so far as to evicting its own people by force from 21 settlements, demolishing 2800 buildings, 26 synagogues, and even relocating the graves of 48 Jews.

UNICEF provides quite an interesting set of data on life in the Palestinian Territories.

Does this sound like people suffering en masse under an “occupation”?

Maybe Mr. Waters should take a closer look at Palestinian culture, considering that even the richest 20% of the population still leave 15% of their children in inadequate care and 92.8% of Palestinians dole out violent discipline.

“They [the rockets] are completely useless, everybody knows it. They’re a gesture of resistance, that’s all. They might hit something, but they won’t. And if they do, they might kill one person, or two people, and very occasionally they do… rockets never hit anything – or very occasionally they blow a few chunks out of a tree somewhere.” - Roger Waters

Do these look like “trees” to you, Mr. Waters?

Are these murdered Israelis “trees”?

These Israelis are also victims of Palestinian acts of terror.

Since 2009, more than 2,500 rocket attacks from Gaza have struck Israeli civilian areas.

Mr. Waters, they are acts of terror. These rockets fly, unprovoked, from Palestinian terrorists whose intent is to kill Israelis, and specifically Jews. They are not firecrackers. They are not fireworks that are mere expressions of dissatisfaction. They are lethal weapons designed to kill innocent civilians. Gaza is not occupied territory. The Geneva Convention gives no such right for Palestinians to attack Jews.

Maybe Mr. Waters should visit with citizens around Bethlehem where, prior to building of the security wall, citizens had to wear Level 4 ceramic armor just to leave their homes, because of the threat of terror attacks.

“What I do know is, whosoever it might be, from any side of any war, if anybody is dropping bombs and killing children – I know I’m on the other side.” – Roger Waters

Apparently, this only applies if non-Jewish children are killed. Does Mr. Waters even know which of the names above are children? Why would he? They are only “trees”.

“If you’re determined to stand on the side of truth, justice, liberty, human rights, individual freedoms, political equality, and freedom to worship whatever you want…situations crop up that demand your attention more than other situations…in Israel, in my view – the comparisons [to South Africa] are valid.” – Roger Waters

Israel is the only country in the Middle East where all citizens – Jews, Christians, Arabs, Druze, anyone – enjoy liberty, human rights, individual freedoms, political equality, and freedom to worship.

“Israel is that bit of the world now. Whether Israelis or anyone else like it or not, it just is.”

While Mr. Waters prattles on about his fantastical “apartheid”, has he witnessed any of the following: ISIS burning men alive, drowning Christians in cages, forcing Christians to sit on bombs and then blowing them up, pushing gays off towers to plunge to their deaths, sawing off the heads of innocent men, and crucify children for not fasting during Ramadan?

Where is Mr. Waters on this?

Here’s your alternative, Mr. Waters: educate thyself. There is no occupation. Palestinian citizens of Israel DO operate under the same laws.

That work first begins with educating yourself, Mr. Waters. Then it means lobbying the Palestinian people to expel terrorists from their land, and to vote in a democratic government that recognizes Israel’s right to exist, and to stop launching terror attacks.

Instead, Mr. Waters supports the anti-Semitic BDS movement. That makes him an Anti-Semite.

Are you listening, Roger Waters?