Lauren Cooley
|
Posted: Jul 03, 2019 11:18 AM
Share   Tweet
The opinions expressed by columnists are their own and do not necessarily represent the views of Townhall.com. 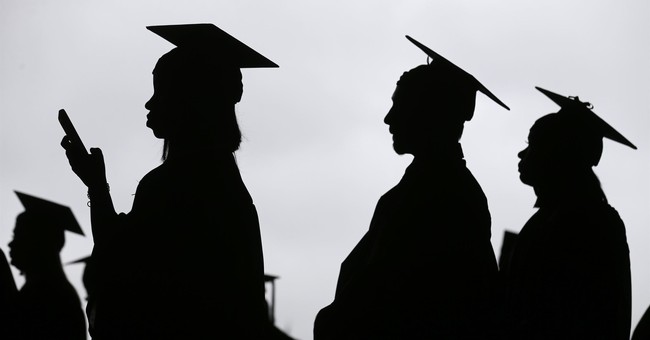 Bernie Sanders has announced a plan to cancel all $1.6 trillion of U.S. student loan debt. The plan has no eligibility criteria and would be available to the nation's approximately 45 million student loan borrowers -- both federal and private alike.

Most detractors are asking, “how are you going to pay for that?”

It’s a good question, but it’s not the only one to consider.

Everyone can acknowledge that college tuition rates have skyrocketed, making college attendance expensive and in some cases unattainable. But perhaps we should be asking why Sanders and other socialist-styled candidates want to focus their bail out on those who still have remaining debt?

Why not extend the bailout to everyone who’s suffered under the financial burden of higher ed?

After all, this is a generational problem, and each member of the millennial generation has suffered under this ballooning industry differently.

Some students have been priced out of the higher education market altogether, forcing them to forgo the college experience. These individuals forged other paths, whether it be technical training or directly entering the workforce. They did not take on debt and that was their wise choice.

Others chose to work their way through college, balancing work with study. While it’s not easy, conscientious young adults do this to avoid or mitigate debt while pursuing a degree. They graduate with no debt or manageable debt -- another wise choice.

Then there are the students who take on large amounts of debt to attend their dream school. They’re promised that their degree will help them get a good enough job that they can pay it back one day. Some pinch pennies after graduating and pay off that debt, but it takes discipline and requires making hard choices. In some cases, millennials have had to forgo buying a house, getting married, or even having kids in order to save enough money to pay off student loan debt. Nonetheless, this is the responsible thing to do.

For some reason, presidential contenders like Sanders and Elizabeth Warren have not offered a plan that benefits the portions of the population who avoided sky-high tuition or paid it off in a timely manner. Instead, they like to focus on borrowers who took on student loan debt and have yet to pay it back.

While 45 million borrowers is a significant amount of people, it’s only a portion of the population that’s been negatively impacted by the higher ed bubble. It’s obvious this debt is holding younger generations back, but Sanders’ plan to cancel student debt doesn’t reward the students who made smart, responsible choices. In fact, it does the opposite -- it punishes them.

Solutions to the cost of college tuition should be forward thinking, with plans to bring the cost down for future students. However if candidates insist on a reparations-style fix to this generational plight, it shouldn’t just be about canceling existing student loan debt.

It would be more reasonable to calculate the average student loan debt and qualify all college graduates a tax credit for that amount. This would ensure that responsible borrowers are also compensated for the insane tuition costs they had to take on in order to obtain a degree.

Of course, this plan of action doesn’t take into account those who avoided college altogether due to cost, (but many would argue this segment is doing better off financially anyway.) This point, however, shows how great of a slippery slope any type of retroactive financial policy can and will become.

Sanders, Warren, and the like don’t have the means to pay for their suggestions, but furthermore, fail to apply their programs fairly. For every person who wants their loan forgiven, there are those who already paid theirs off and will be damned if they have to help pay off someone else’s.

If you want to get serious about the burdens impacting younger generations, that’s fine. But forgiving current student loan debt ignores the root of the problem and punishes those who avoided debt or paid it off responsibly.