Laura Hollis
|
Posted: Sep 22, 2022 12:43 AM
Share   Tweet
The opinions expressed by columnists are their own and do not necessarily represent the views of Townhall.com. 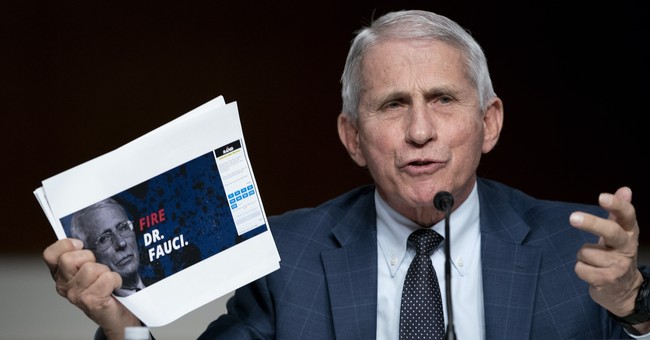 According to Wikipedia, the notion of a “noble lie” originated with Plato in The Republic, and is defined as a myth or false statement “typically of religious nature, knowingly propagated by an elite to maintain social harmony or advance an agenda.”

Today’s “elites” are trying to advance an agenda, alright. And they certainly expect their every statement to be treated as gospel handed down by a deity – as nonbelievers discover when we dare to point out how much the elites lie and how often.

Dr. Anthony Fauci, former director of the National Institutes for Allergy and Infectious Diseases and the U.S.’s “COVID czar” for the past two-plus years has made something of a habit of lying for what he claims are beneficent reasons. When the virus first hit our shores, Fauci stated that wearing masks did nothing to stop the spread of the disease. Later, he insisted that the public should wear masks, claiming that “the science had changed.” When the evident absurdity of that statement was challenged (the “science” had not “changed” at all), Fauci admitted that he lied to the public to prevent a shortage of masks for health professionals.

He lied again when asked what percent of the U.S. population needed to be vaccinated (or infected) in order to obtain “herd immunity.” First, Fauci said it was 60 – 70 percent. Later, he said it was “close to 90 percent.” Again, when challenged, Fauci stated that he lied initially, planning to “nudge the numbers up” when he decided that the public was prepared for the bad news. In April, Fauci and other NIAID scientists published an article which concludes that herd immunity against COVID-19 is “almost certainly an unattainable goal.”

And now, it appears that there are still more lies.

Andrew Huff, a former vice-president of EcoHealth Alliance, has turned whistleblower. In a sworn statement released by his attorney, Huff states that EcoHealth Alliance developed the SARS-CoV-2 virus (that causes COVID-19), by conducting “gain of function research” on bat-borne viruses that was funded by Fauci’s NIAID, as well as the National Institute of Health (NIH).

This is exactly the kind of dangerous research that Fauci was questioned about by Congress, and which he expressly statedthat he never funded. That statement looks to be a complete falsehood – not merely “misleading” as some have tried to claim.

If – as appears to be the case – the COVID-19 pandemic was caused by inadequate safety precautions at a lab where experimental research was being conducted, these lies and plenty of other untruths, half-truths, and God-only-knows-what’s-truths quickly became the party line in circumstances where no one really understood what had been unleashed upon the world.

Doctors who prescribed drugs like hydroxychloroquine and – yes - ivermectin that successfully treated the symptoms were silenced and censored, their professional reputations besmirched. Information about the demographics who were truly at risk (the elderly, the immunocompromised, the morbidly obese) was buried in assertions that “everyone” was at risk. Those same blanket assertions were behind the insistence that everyone had to be injected with experimental “vaccines” that we were told would prevent infection and transmission. But Dr. Deborah Birx, former coordinator of the White House Coronavirus Task Force, admitted earlier this year, “I knew these vaccines were not going to protect against infection … I think we overplayed the vaccines.”

Tell that to the families of countless young people who have dropped dead of heart attacks or been diagnosed with myocarditis after receiving the COVID-19 vaccines – a phenomenon observed in the United States, the United Kingdom, throughout Europe and Asia.

The liars lied to cover up their malfeasance, negligence and ignorance. And the world paid a staggering and incalculable price. Billions of people’s lives were upended. Millions died from the virus. Countless more were left impaired by it. Lockdowns destroyed businesses, shuttered schools and set our children back years academically.

If these were the “elites”’ only lies, that would be bad enough. But there are so many more.

The “Russia collusion” accusations leveled against former president Donald Trump that spawned a multi-year investigation costing taxpayers tens of millions of dollars, were total fabrications. And everyone involved knew it from the start.

Hillary Clinton’s campaign apparatus paid for the dossier containing those fictitious allegations. The source of some of them was a paid FBI informant with a reputation for falsehoods. In other words, the FBI knew the information was false. They nevertheless used that information to fraudulently obtain a warrant to spy on Trump and his staff.

On the corporate side, our “elites” censor the truth and then lie about it. Social media CEOs lie when they say that their companies don’t censor conservative speech. They pretend to be neutral, but help high-powered political figures (as long as they’re left-wing) disseminate lies to the public; especially – as we saw with Big Tech’s squelching of the story about Hunter Biden’s laptop - when the truth will affect how people vote in an election.

Politicians have been demonizing their opponents with lies and smears since time began. But because so many Americans see through these lies (“The border is secure!” “The economy is doing great!” “The Inflation Reduction Act will actually reduce inflation!” “Men can become pregnant!” “Renewable energy can replace fossil fuels!”) the left now demonizes half (probably more than half) the country. Obama did it first, calling Americans who did not like his policies “bitter clingers.” Hillary Clinton went further, calling them “a basket of deplorables.“

The notion of the “noble lie” is itself a lie and a poison that spreads, as we’re seeing right now. The tellers of lies soon conclude that every lie is justified by their “noble” goals. And then it’s not just lies; it’s any and all conduct engaged in to retain power.

All the lies we are being told are deliberately intended to frighten people into giving up the liberty and prosperity that our Founders risked their lives to create; that wars were fought to obtain and keep; that literally hundreds of millions of men and women engaged in entrepreneurship and commerce, as employers and employees, have devoted their lives to providing.

And a relative handful of arrogant people think they’re so superior that they should be able to undo it all.

There is nothing “noble” about that.