'Art' and Its Ugly Consequences

Laura Hollis
|
Posted: Jul 18, 2019 12:01 AM
Share   Tweet
The opinions expressed by columnists are their own and do not necessarily represent the views of Townhall.com. 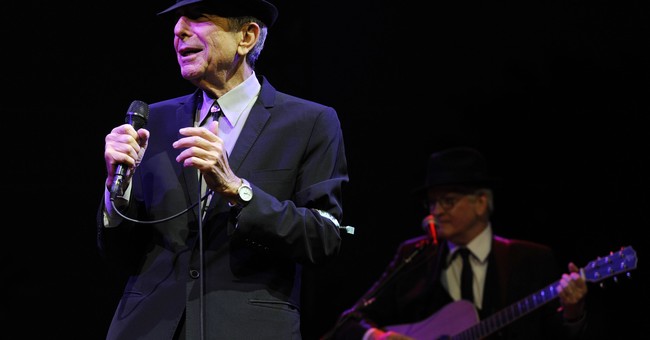 The couple met on the Greek island of Hydra in 1960 and lived there for a time in a small community of expat artists. The film follows the lives of Cohen and Ihlen thereafter through their many separations and (increasingly brief) reunions, and concludes with Ihlen's death from leukemia in July 2016 and Cohen's death just four months later in Los Angeles.

The story is supposed to be touching -- and in some ways, it is. But when one removes the soft-focus lens with which we tend to view artists, it is something else altogether.

When Ihlen and Cohen met, she had a baby son, Axel, from a "tempestuous relationship" with Norwegian novelist Axel Jensen. Jensen was determined to cast off "bourgeois conventions" -- including fidelity and fatherhood; he abandoned Ihlen and their child. When Ihlen fell in love with Cohen, she sent her son -- just a toddler -- back to Norway to live with his grandmother. Later, she dragged the child to New York, where Cohen was living a bohemian life in the ramshackle Chelsea Hotel. That stay was brief, as Cohen was more interested in musical friends like Janis Joplin and Joni Mitchell than Ihlen. Ihlen then sent Axel to Summerhill, an experimental boarding school in England. Anthony wrote that Ihlen's son suffered terribly: "The person who most struggled with the dislocation and uncertainty that (Cohen's and Ihlen's) life together brought was Ihlen's son, Axel Jnr. ... (H)e was unmoored and desperate for his mother. As he grew older, he developed psychiatric problems and has subsequently spent a large part of his life in and out of institutions."

Axel was not alone. Helle Goldman, translator of Ilhen's biography, said: "You have to understand that the kids that stayed on the island became very messed up later. I know some of them. It did not turn out well for them."

Unsurprisingly, many of the adults did not do well, either. "As Broomfield shows in his film, very few of those who gathered on Hydra emerged with either their art enhanced or their lives more sorted," Anthony wrote. "Divorce, suicide and madness were some of the endings that the journey had in store."

Ihlen experimented with I Ching, LSD and Scientology before settling down into an apparently platonic marriage with an engineer. Cohen, for his part, was infamously promiscuous, had numerous relationships, and fathered two children with artist Suzanne Elrod but never married.

This story is utterly unremarkable, at least from the standpoint of looking at artists' lives under a microscope. But what is notable is how willing we are to ignore the ugly consequences of someone's decisions as long as they produce what somebody somewhere considers to be great art. It is as if the legacy artists leave to society is generally more important than the havoc they wrought: severed relationships, broken hearts, abandoned children, emotional damage and mental illness.

This is not a phenomenon that is unique to our age, by any means. But while Leonard Cohen's work does have a haunting beauty to it, the toleration of ugliness for the sake of great art has taken a very dark turn in our culture -- to ugliness for ugliness's sake.

Nowhere is this more evident than with popular music, TV and film.

Former Disney star Zendaya is now starring in the HBO series "Euphoria," whose creators claim is about real teen life today. Episode one features Zendaya's character, Rue (a drug addict fresh out of rehab), describing her birth in graphic and self-pitying terms. Director Sam Levinson wanted to open with an internal shot of Rue's mother's genitalia during labor -- which the network nixed. But there's plenty of other offensive content including full frontal male nudity (a locker room filled with naked high school boys), a transgender love affair, a rape scene and a violent drug overdose. (Remember when "13 Reasons Why" was cutting-edge? The boundaries have to be pushed yet again.)

Zendaya is just the latest Disney star to move into "edgy" material, purportedly to show off her chops as a "serious" actor. Lee Thompson Young, Lindsay Lohan, Britney Spears, Shia LaBeouf, Mischa Barton, Demi Lovato, Miley Cyrus, Amanda Bynes and Vanessa Hudgens, among others, paved the way. And like the children of the Greek island of Hydra, the Disney alums who hit the "big time" have suffered the consequences: drug abuse, overdoses, hospitalizations and stints in rehab; very public bouts with serious mental illness; criminal conduct and arrests; hasty marriage and divorce; even suicide.

Arguably, the more mediocre the talent, the "edgier" the presentation has to be. Miley Cyrus, for example, has made more of a name for herself since her "Hannah Montana" days with her inflammatory interviews and vulgar antics than with her limited musical abilities. Most recently, she filmed a music video in a red rubber catsuit, complete with pointed metal studs placed strategically on the crotch to look like sharp teeth. Her mother stars in the video with her. Charming.

This is what passes for "art" these days. The internet and social media make millionaire stars of the "artists," ensuring that their "work" is everywhere and that they are amply rewarded for it.

The consequences will be ugly.

Biden Had a Call With the Ukrainian President. It 'Did Not Go Well.'
Townhall
Oops: White House issues a 'corrected' chart showing economic growth during Biden's first year
Twitchy
Dems Itching to See GOP Senators ‘Block a Black Woman’ Seem to Be Forgetting Some Things
Redstate
'Walk Away' Activist Brandon Straka Can Finally Speak About Being Under the FBI's Thumb After Jan 6
PJ Media