When Heroes Have Feet of Clay

Laura Hollis
|
Posted: May 30, 2019 12:01 AM
Share   Tweet
The opinions expressed by columnists are their own and do not necessarily represent the views of Townhall.com. 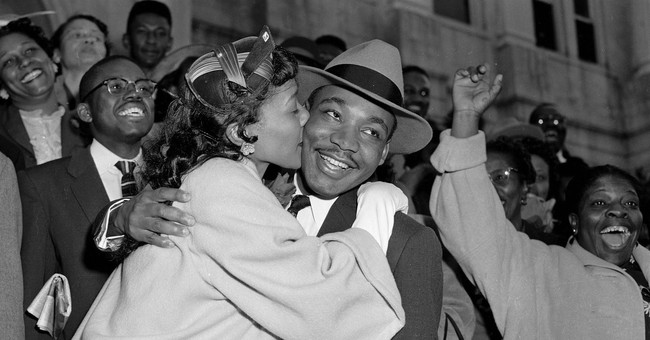 So, what happens now?

Will the civil rights icon be subject to the same standard that is now being applied to other towering historical figures?

There are calls to remove a painted mural of George Washington in a San Francisco high school named for the first president.

According to the Southern Poverty Law Center, over 100 Confederate monuments have been removed since 2015 (when mass murderer and white supremacist Dylann Roof shot and killed nine African American worshippers at a church in Charleston, South Carolina). Some of these have been taken down by officials in the dead of night. Others -- like "Silent Sam," a statue of an unnamed Confederate soldier at the University of North Carolina -- have been destroyed by a mob.

Universities are scrambling to rename buildings and otherwise redress grievances. The University of Oregon has put in place new criteria that prohibit naming buildings after individuals with "discriminatory, racist, homophobic, or misogynist views." At the University of Notre Dame, historic painted murals in the campus' Main Building (popularly known as "the Golden Dome") are going to be covered up (high-resolution images of the artwork will be posted elsewhere on campus), because the depictions of Christopher Columbus' interactions with indigenous peoples of the New World have been deemed inaccurate and offensive to Native Americans.

In this era of #MeToo and "Trust Women," what would the reaction be if a group of feminist activists were to arrange a protest around the Martin Luther King Jr. Memorial in Washington, D.C., take sledgehammers and other blunt instruments to the statue of the man there, deface it with spray-painted sayings and hire a crane to knock it over? What would the public reaction be if local police and the National Park Service personnel were ordered to "stand down" and allow that to happen? Would pundits, gender and race scholars, and Hollywood tweeters jump to the protesters' defense? Would we hear calls for all streets and schools and parks named for Dr. King to be renamed?

I don't think so. (And I would hope not.) But the deafening silence since the sordid revelations -- unverified though some of them are -- says plenty about the public discomfort when our heroes are revealed to be deeply flawed individuals. What does it do to their legacy? What standards are we holding public figures to now?

These questions are closely related, and it seems to me that there are three ways we can respond to revelations like the recent headlines about Dr. King.

First, we can be hypocritical about human failings, feigning outrage when they appear in our political opponents and nudge-nudge-wink-wink them away when they are manifest in political allies. This is, quite frankly, the way things have been done for the past 30 years or so, and it is past time we admit what havoc this has wrought. It has resulted in a precipitous erosion in standards of behavior ("Well, their guy did it, so ours can, too."), cynicism and widespread contempt for public figures generally. Admittedly, it's easy to hold public figures in contempt when they behave so abysmally, but we're far less likely to blame ourselves for rewarding it.

It would be a marked improvement for us to start by agreeing to hold all public figures -- not just the ones we personally agree with -- to the same standards. But we must avoid the inclination to deny the achievements of anyone of current or historical significance unless they pass some moral purity test. History has shown that, humans being what they are, this is doomed to failure, whether such impossible standards are imposed by right-wing puritans or Politburo leftists. Accomplishments become a source of dread rather than a sense of achievement, as the achiever knows it is only a matter of time before the mob piles on, looking for chinks in the armor. (Social media at its worst is a contemporary example of this.) Such an approach leaves us with no one to look up to, admire or emulate.

The correct approach, in my view, is to apply not only a more consistent standard when evaluating behavior but also a more honest one. We can recognize -- and, where appropriate, honor -- the achievements of remarkable individuals like Thomas Jefferson or Martin Luther King Jr. without glossing over their failings: We can discuss their blind spots, the standards of their day that differ from our own, the times they fell short of their own expectations.

None of this is to suggest that -- for example -- we cut Benito Mussolini some slack because he made the trains run on time, or revere Mao Zedong and Josef Stalin because of their brutal efficiency in modernizing the countries they ruled.

But admittedly, mass murderers and leaders of repressive regimes are the easy cases. The lives of nearly everyone else -- including those who have made positive contributions to mankind -- will be complex portraits of virtues and vices, sacrifice and selfishness.

It would serve us well to admit this truth, and stop politicizing it.