Hypocrisy, Thy Name Is Progressive

Laura Hollis
|
Posted: Aug 25, 2016 12:01 AM
Share   Tweet
The opinions expressed by columnists are their own and do not necessarily represent the views of Townhall.com. 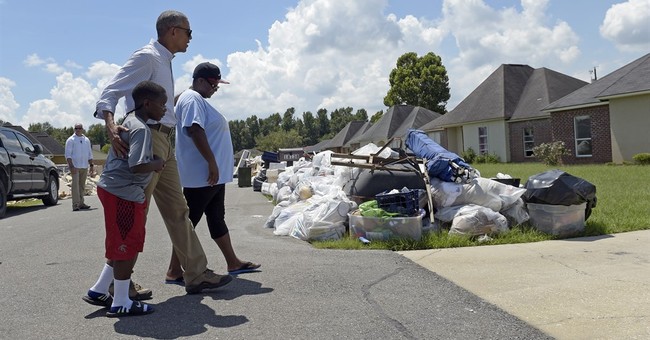 President Obama finally made it down to Baton Rouge to see the flooding -- after finishing his vacation on tony Martha's Vineyard, of course. The entire charade is a lesson in leftist hypocrisy. The same press that excoriated President Bush for flying over New Orleans to view the devastation wrought by Hurricane Katrina in 2005 didn't make a peep about Obama prioritizing his golf games.

In fact, come to think of it, it wasn't just the press that criticized President Bush's response to Katrina. During his 2008 campaign for the presidency, Obama himself said, "We can talk about what happened for two days in 2005, and we should. We can talk about ... a president who only saw the people from the window of an airplane instead of down here on the ground."

Do we get to talk about a president who only sees things from the seat of a golf cart?

Remember when President Obama went golfing right after kidnapped American journalist James Foley was beheaded by ISIS? That was on vacation in Martha's Vineyard, too. (Obama admitted that it was "bad optics," but complained that "the theater" of the presidency just didn't "come naturally" to him. Um, OK.) Or what about the "Night at Versailles" fundraiser in Las Vegas, hosted by Hollywood royalty Beyonce and Jay-Z, complete with a $100,000 tower of gold champagne bottles? That was Obama's somber destination the day after Ambassador Chris Stevens and three other Americans were killed in the terrorist attack in Benghazi.

Crickets from most of the fawning media.

Then there's the national debt. Also in 2008, then-Senator Obama criticized President Bush for adding $4 trillion to it, saying, "(T)he way Bush has done it over the last eight years is to take out a credit card from the Bank of China in the name of our children, driving up our national debt from $5 trillion for the first 42 presidents -- No. 43 added $4 trillion by his lonesome, so that we now have over $9 trillion of debt that we are going to have to pay back -- $30,000 for every man, woman and child. That's irresponsible. It's unpatriotic."

This from the same fellow who will leave the country with a $20 trillion national debt -- more than all the previous presidents -- including the profligate President Bush -- combined.

And the press just smiles and nods.

I know, if I pointed out all the incidents of the left's hypocrisy, we'll be here all day.

But it isn't just Obama's hypocrisy that is infuriating -- it is his arrogance and disdain for the American people. And the recent Louisiana flooding put those front and center as well.

Although he couldn't be bothered to interrupt his vacation, he made sure that his Justice Department sent a 16-page letter to Louisiana officials, warning of what would happen if anyone engaged in discrimination during rescue efforts. Plenty of Louisianans were offended by that, including lawmakers, first responders and volunteers.

This is Obama's worldview in a nutshell, and indeed it's a pretty good snapshot into the general progressive worldview: While the "Cajun navy" -- people of all backgrounds, ethnicities, religions and socioeconomic status -- got their boats out and rescued their neighbors, our recreating president exercised some of that infamous audacity to lecture Louisiana citizens about discrimination -- from the safety of a golf course. (Rhetorical question: Would Obama have shown up sooner if someone had told him that Baton Rouge was a water hole?)

Meanwhile, Donald Trump adjusts his schedule, gets a plane and a truckload of emergency supplies to east Baton Rouge Parish. And the media scrambles to find out whether or not he actually wrote the check for the truck or the supplies in it.

But he's the heartless one.

The lesson about progressives here is that what really matter isn't what they do, it's only what they say. Hillary Clinton can profess to be "for the little people," but rake in tens of millions of dollars from foreign governments, and attend parties instead of showing up in a crisis; Obama can golf at one of America's most exclusive vacation spots while tens of thousands of people lose their homes -- and the lefty press will maintain a dutifully stoic silence.

There is an even more important lesson about Americans that gets lost every time progressives start clamoring on about needing this or that government program: We can take care of ourselves. And we can take care of each other. Obama and his cronies are so busy sniffing around for discrimination that they overlook the things Americans do for each other every day, as well as those extraordinary efforts we make when facing a crisis or tragedy.

In his 2008 presidential campaign, one of Obama's slogans was "Yes, we can!" Yes, Mr. President, we can. We can help each other. We do it every day.