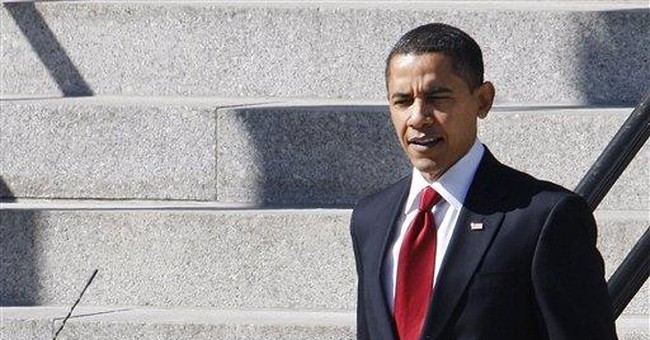 This is priceless. David Brooks is having a bit of "buyer's remorse" over Barack Obama? In Tuesday’s New York Times editorial, Brooks laments that moderates thought Obama was a centrist, but now they see - *gasp!* - he's an ultra-Left ideologue who is going to spend the country into oblivion in order to try to achieve his Marxist coup d'etat. This, Brooks protests, isn't what they (the self-described moderates) expected.

And they certainly weren't listening to Obama.

Barack Obama signaled loud and clear who he is, what he believes, and what he would do -- as a "commie organizer," as a state senator, as a U.S. Senator, as an author, and as a Presidential candidate. He supports abortion-on-demand at all stages of pregnancy, black liberation theology, an activist judiciary that will rewrite the Constitution to correct our Founding Fathers’ “blind spots,” confiscatory taxation and wealth redistribution, restrictions on gun ownership, limits to free speech, an emasculated military, and massive, massive transfers of power to an even greater leviathan of a federal government.

And that’s just content. More insidiously, Obama has also made clear how valuable his training in Saul Alinsky’s methods have been to his worldview about the process of obtaining political power. And Saul Alinsky’s philosophies can be traced back to much earlier communist and socialist radicals who were blunt about the fact that it is easiest to take over a “democratic” political system by use of the democratic franchise (voting), after which it becomes necessary to dismantle or otherwise encumber that system, to avoid being tossed out by the very same voters who had put you in power. These same writers also admit the necessity of lying, and of creating economic collapse, in order to ensure that “the people” will cry out for government intervention. (Don’t take my word for it, read Bruce Caldwell’s superlative edition of F.A. Hayek’s The Road to Serfdom. The parallels between 1940s England and the United States today are shocking and enlightening.)

Obama has already begun his left-wing lurch at a breakneck pace. You can expect the rest of his ultra-Left agenda to be implemented – or at least attempted – during his tenure in office. And you can expect any opposition to be vilified, mocked, ridiculed, humiliated, and – if at all possible – silenced. It has already started. This is no aberration; this is who Obama is.

"Centrists," "moderates" and "social justice Catholics" (among others) who believed otherwise did so because their entire justification for supporting Obama consisted of, "We know what he's saying, but we don't believe him." This is the political equivalent of sticking one's fingers in one's ears and yelling, "Nah nah nah nah nah nah - I can't hear you." How else to describe the deliberate obtuseness of authors and commentators who insisted before the election that Obama was "going to govern from the center," and the increasingly desperate and transparently specious assertions after the election that that's precisely what he was doing? Hell, they’d still be saying it, if it weren’t for the fact that the Dow takes a tumble every time he opens his mouth.

Well, I'll give Brooks credit for this much: at least he is willing to admit it now. Prominent Catholic and Pepperdine Law School dean Doug Kmiec is still running around proclaiming Obama to be the most pro-life president ever. This despite Obama's historic refusal to support the Born Alive Infant Protection Act, his promise to sign the Freedom of Choice Act, his repeal of the Mexico City Policy, his appointment of EMILY's List and NARAL operatives to important positions, and his nomination of pro-choice Kansas Governor Kathleen Sebelius for Secretary of Health and Human Services. (At this rate, Kmiec will soon have a pro-life website up and running in support of Kansas late-term abortionist Dr. George Tiller. I can see it now: www.catholicsfortillerthekiller.com. Perhaps Kmiec could argue that Tiller, too, actually serves the pro-life cause, because the procedures he employs are so horrific, even women who want an abortion are scared off.)

Even so, Brooks still doesn’t quite get it. Despite his growing recognition of who and what Obama really is (and his admirable willingness to acknowledge it), what does Brooks fear most? Republicans back in power. He says, “The only thing more scary [sic] than Obama’s experiment is the thought that it might fail and the political power will swing over to a Republican Party that is currently unfit to wield it.” If Brooks’ fear here is returning the reins of power to a bunch of witless RINOs whose idea of conservative leadership and fiscal responsibility is to spend as much as Obama but on different stuff, then I understand, even though I don’t agree with him. But I suspect Brooks is suggesting that, despite everything Obama intends to do, we have more to fear from a political party whose members want to protect the lives of unborn children and define gays’ permanent relationship commitments as ‘civil unions’ rather than ‘marriage.’ This is absurd.

Obama’s economic ideas will fail. They have failed everywhere they have been tried. The only questions are how quickly they will fail, and what the consequences will be thereafter. Sooner is better than later, if past is precedent. But the precedent isn’t encouraging in that respect. As the brilliant Hayek explained in 1944, the inherent flaws in collectivist economic theories have inevitably resulted in totalitarian political regimes. And Hayek had it easier than we do now; the socialist colleagues to whom he was writing considered themselves traditional “liberals” in the 18th century sense of believing in political liberty, and would have been horrified at the prospect of compromising those liberties, even in pursuit of a more equitable distribution of wealth. But so-called “progressives” in this country – and President Obama is at the front of this line - would freely toss away the protections provided in our Constitution, if it meant being able to grab some extra cash away from someone who has more.

This is a tried-and-true prescription for economic collapse, poverty, anarchy, chaos, political upheaval, and widespread violence. History has shown us this over and over again. Human beings either live in a system of free and voluntary exchange, or they live at the point of a gun. There is no “middle path,” desperate though some moderates might be to find one, and it is distressing that intelligent people like Brooks are falling for the same old con game.

There is an old common law concept called caveat emptor. It means, "let the buyer beware," and it was traditionally interpreted to mean that it is the buyer who has the duty to investigate what it is (s)he is purchasing; the seller would have no duty to disclose anything. If a buyer failed to use reasonable diligence, courts applying caveat emptor would typically give the afflicted buyer no relief.

In this case, the disgruntled moderate voters who supported Barack Obama cannot claim they didn't know. He - and we - made everything perfectly clear.

And there is no relief in sight.