A President Who Won't Uphold the Constitution? Never. 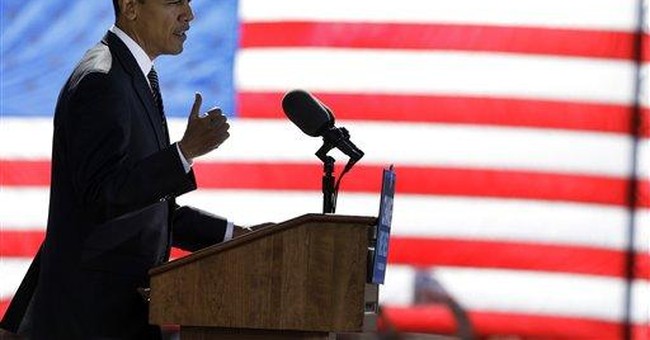 Well, now we know why Barack Obama’s been so reluctant to have symbols of this country associated with his campaign.  No flags on his airplane.  Nix to pins on his lapel.  Not inclined to put his hand over his heart during the national anthem.

After all, it turns out he has a problem with that other slightly more significant representation of our nation, the United States Constitution.

The Drudge Report and other legitimate investigative sources like the National Review, have exposed the most damning evidence yet of Barack Obama’s utter disregard for the core principles of the United States government.  In a radio interview given in 2001, Obama reveals yet again about what he means by ‘equality,’ when he says, “…the Supreme Court never entered into the issues of redistribution of wealth, and sort of more basic issues of political and economic justice in this society.”

Bad?  Sure.  Because now it’s not just “spread the wealth” a little bit (antithetical as that already is to American notions of hard work and prosperity).  It’s that “redistribution of wealth” is part and parcel of Obama’s vision of what is “political and economic justice” in this society.

But it is much worse.  Because this Harvard-educated lawyer then announces that the United States Supreme Court when headed by Chief Justice Earl Warren, was “not radical enough,” in its pursuit of civil liberties, because “[i]t didn’t break free from the essential constraints that were placed by the Founding Fathers in the Constitution.”

If this has not stopped you dead in your tracks, either you don’t understand, or you’re already dead.  What Obama is doing here is expressing his opinion that the Court would have better effectuated his definition of “political and economic justice” if it had been willing to ignore the limits placed upon it by the Constitution.

I have written elsewhere of Obama’s potential designs on the country, and his inclinations should he obtain the power he seeks.  Many of the hypotheticals I posited then were pooh-poohed by readers, who said, in essence, “He’d never do that; the Constitution prevents it.”

At this point, any belief in Obama’s respect for constitutional limits is delusional.  If he is so cavalier about the Constitution’s limits upon the power of the judiciary, why on earth would he respect the limits on the power of the Presidency?  Or on Congress?  Clamor for the reinstatement of the insidiously named “Fairness Doctrine” has already put the First Amendment in Obama’s sights.  What would be sacrosanct about the Second?  Or the Fourth?  Or Fifth?  Or Eighth?  Why would Obama let any constitutional limit stand in the way of what he views as “political and economic justice”?

These views are why Obama’s acquaintances, associates and allies matter.  Why his Alinskyite “by any means necessary” philosophy matters.  Why we should care that he funds and takes money from people who say they hate or wish to undermine America.  Why we should be concerned when he took spiritual sustenance from a man who spends much of his time condemning white people.  This is what drives Barack Obama.  And this is why he wants the Presidency.

This is deception.  As an initial matter, few listening to him would understand the gobbledygook, “negative liberties.”  But more importantly, he never explains that the United States Constitution is the oldest constitution in effect in the world.  And that is no accident.  It is the oldest, because it is the only constitution I am aware of that is drafted the way it is.  Specifically, other constitutions list certain rights that the government conveys upon the people.   Or, to put it as Obama did, the things “government must do on your behalf.”

Our Constitution, by contrast, has precisely the opposite construction.  We, the people, are presumed to have all the rights, not just those written down in the Constitution.  (And the Declaration of Independence states that these rights are “endowed by our Creator;” not by any government.)

Lest this be unclear, the drafters of the Constitution put it in writing.  The Ninth Amendment says, “The enumeration in the Constitution, of certain rights, shall not be construed to deny or disparage others retained by the people.”

And the Tenth Amendment goes further, stating explicitly that “The powers not delegated to the United States by the Constitution, nor prohibited by it to the States, are reserved to the States, respectively, or to the people.”

Obama is engaging in dangerous demagoguery when he suggests that we the people of the United States need him – or the government he wants in place – to give us rights we don’t already have.

This deceitful view was echoed when he was introduced by Democratic Congresswoman Marcy Kaptur in Ohio earlier this week, who said that Americans “needed a Second Bill of Rights guaranteeing all Americans a job, health care, homes, an education, and a fair playing field for business and farmers.” This is no “bill of rights,” it is a bill of attainder (look it up).  Those found “guilty” would be anyone wealthier, more successful, or more prosperous than any other.  And the punishment?  The very things Obama and the Democrats are already pushing for: high taxes, and even seizure and redistribution of all American’s private property.

I am stunned beyond belief that these blunt admissions do not give otherwise patriotic Obama supporters (and this describes the vast majority of them) serious pause.  But those voting for him seem to fall into two groups.  The first group says, “Oh well, Bush has trashed the Constitution, too.”  Even assuming that this were true, it is hardly a ringing endorsement for your candidate.  Worse, it displays a surprising ignorance that the procedural protections Obama is determined to dismantle won’t be there to protect you against the next right-wing fascist you guys are always running in terror from.  What – you think Obama will give those rights back right before (if) he leaves office?

The second group consists of disgruntled so-called “conservatives” like Kathleen Parker, Colin Powell, Peggy Noonan, and Christopher Buckley, who hear what Obama is saying, but choose not to believe him.  I’m not sure what to say to these people, except that their refusal to learn from history suggests that there may be something to those claims that there’s no such thing as evolution.

Those who drafted the Constitution knew that persuasive orators who promised beneficence in exchange for liberty would come along.  This is why George Washington admonished that “Government is not reason, it is not eloquence, it is force; like fire, a troublesome servant and a fearful master.”  And it is why Thomas Jefferson said, "In questions of power then, let no more be heard of confidence in man, but bind him down from mischief by the chains of the Constitution."

Every President, upon taking office, takes an oath to "preserve, protect and defend the Constitution of the United States."   A President should be willing to die to defend our Constitution.  Obama is dying to destroy it.