Lathan Watts
|
Posted: Jun 07, 2019 12:01 AM
Share   Tweet
The opinions expressed by columnists are their own and do not necessarily represent the views of Townhall.com. 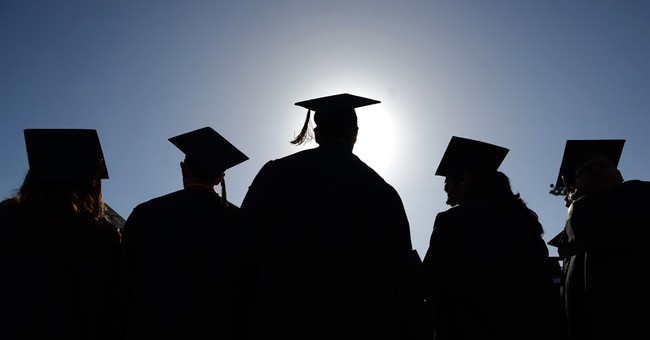 Kriya Naidu was the valedictorian of her Florida high school, but she was recently prohibited by school officials from giving her graduation speech because of its content.

Cait Christenson was one of six valedictorians at her Wisconsin high school, but again, school administrators found the content of her graduation speech too controversial and prohibited her from addressing her fellow graduates.

Lulabel Seitz was the valedictorian at her California high school. And, you guessed it, her graduation speech was also censored by school administrators – in fact, her mic was turned off in the midst of her address.

During this time of year, we at First Liberty Institute are accustomed to being contacted by high school graduates who have had their graduations ruined by Orwellian public school officials who zealously censor any and all references to faith made by those who earned the privilege to address their fellow graduates. Too often we are not contacted until after the fact; after the student has had their moment in the sun darkened by government censors.

For decades, we’ve been fighting on behalf of the First Amendment’s promise of free religious expression for high school graduates, arguing that students’ speech at graduation ceremonies is their own, not the government’s and therefore including mentions of their faith is constitutionally protected. We’ve argued that if protection of religious expression is limited, it’s only a matter of time before free speech itself, regardless of religious content, becomes the target.

Unfortunately, that time is now.

You see, none of the cases listed above had anything to do with students talking about their faith. In every case, school officials censored speech simply because they feared the content was too “controversial” or “too political.”

No one should be surprised. The slippery slope from censoring religious speech to censoring “controversial” speech is a short one. The Founders understood this. They realized the essential nature of religious liberty to all other freedoms, placing it first in our Bill of Rights. For if government can insert itself into man’s relationship to his God, there is no property that is safe, including our thoughts and words.

Beyond that, the Founders enshrined religious freedom and free speech in the First Amendment because they understood that we grow from hearing opinions and perspectives with which we may not agree. A true education, in fact, must challenge our thinking and force us to contemplate ideas not our own.

That was the conclusion of the U.S. Court of Appeals for the Ninth Circuit. In the 1993 case Hills v. Scottsdale Unified School District, the court concluded, “The school’s proper response is to educate the audience rather than squelch the speaker. Schools may explain that they do not endorse speech by permitting it. If pupils do not comprehend so simple a lesson, then one wonders whether the schools can teach anything at all.”

I guess the clerks at the Ninth Circuit couldn’t find a copy of this opinion when the case of Coach Joe Kennedy was decided, but I digress.

Too often, those who argue most passionately against religious expression by public school students are outraged when the same students are silenced for their political opinions. But the lesson is the same - there is something shameful or even dangerous about certain opinions, and young minds must be protected from such opinions, even at the cost of the constitutionally protected freedom of the speaker.

All of this was predictable. Where one inalienable right is infringed upon, others are sure to follow. We are, in fact, reaping what we have sown.

The battle over high school graduation speeches is a microcosm of our cultural debate over whether we should allow speech and ideas that some find “controversial” or “offensive.” Instead of erring on the side of free expression, too many of our government officials are choosing censorship. We do so at our own peril; trade freedom for comfort and you’ll lose both.