Without Religious Liberty, America Doesn’t Have a Prayer

Lathan Watts
|
Posted: May 02, 2019 12:01 AM
Share   Tweet
The opinions expressed by columnists are their own and do not necessarily represent the views of Townhall.com. 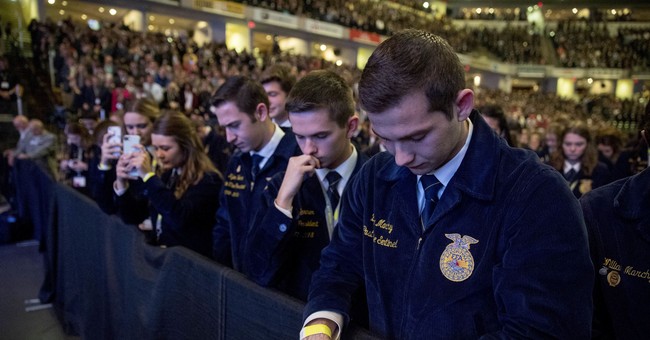 Today is the annual National Day of Prayer. Across America people of faith will gather in homes, in churches, and in public to pray for our nation. Today’s public ceremonial acknowledgement of prayer stands in stark contrast to the increasingly narrow portion of daily life where prayer is tolerated.

In Washington, high school football coach Joe Kennedy was fired for kneeling in silent prayer at the fifty yard line after games. In Florida, two private Christian schools were prevented from using the public address system for a pre-game prayer when they faced each other in the state football playoffs. In New York, an orthodox Jewish rabbi has paid over $40,000 in fees seeking government permission to host fellow Jews in his home for prayer and worship. County Commissioners in Rowan County, North Carolina can no longer open their meetings with an invocation. Students in Texas, praying for a classmate during lunch, were told they could only do so if they hid behind a curtain or moved out of sight of others. (My law firm, First Liberty Institute, represents clients in all of these cases.)

Some of these conflicts have since been resolved in court, while others are still being litigated. Still, an untold number of citizens face the dilemma of whether to openly live according to their faith in all aspects of life and face the backlash of being a cultural heretic when their religious beliefs stray from societal orthodoxy on certain issues; or to resign themselves to quietly segregate their faith into a few hours a week inside a sanctuary or temple where they seek forgiveness to assuage their conscience for abandoning their beliefs the other six days a week.

This disconnect between a public display of respect for the role of religion in American life, like the National Day of Prayer, and the sociopolitical antipathy towards the authentic free exercise of religion is more than a display of cognitive dissonance or hypocrisy. It’s an existential crisis for the American republic. The fabric of civil society and ordered liberty is held together by a common notion of morality most often inculcated by religious teaching.

“America was founded by people who believe that God was their rock of safety. I recognize we must be cautious in claiming that God is on our side, but I think it’s all right to keep asking if we’re on His side.”

Since last year’s National Day of Prayer, we’ve witnessed state legislators in New York give themselves a standing ovation for legalizing the murder of newborn children. Other states followed suit. In our nation’s capital multiple nominees have endured the blatantly unconstitutional questioning of their fitness to serve in government because of their religious beliefs. War memorials and other monuments have come under threat of demolition for containing religious imagery. Multiple states are still attempting through litigation to force Catholic nuns to subsidize birth control.

Therefore, the answer to Reagan’s question may be found in the book some educational institutions claim should come with a trigger warning,

“These people honor me with their lips but their heart is far from me. But in vain do they worship me, teaching as their doctrines the precepts of men.” Matthew 15:8-9; Isaiah 29:13

Our Founding Fathers stated unequivocally that the purpose of government is to protect the God given rights of the people. Moreover, they knew if government were ever permitted to invade the space between man and God and force a citizen to violate his conscience, there would be no limit to government control of the people. Hence, religious liberty is the first liberty enshrined in the Bill of Rights: without it the rest will fall. And national celebrations notwithstanding, our nation won’t have a prayer.