Ricci and the Title VII Catch 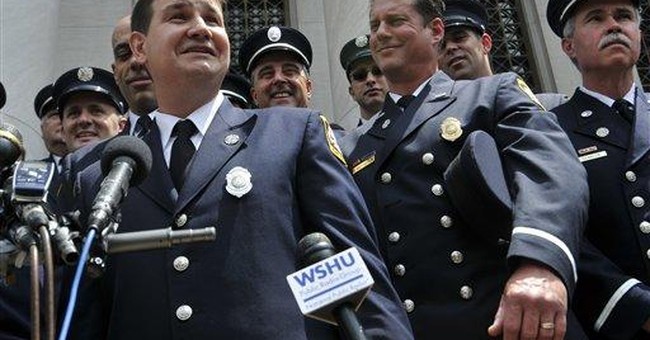 In a 5-4 decision split along party lines, the U.S. Supreme Court ruled in favor of white and Hispanic New Haven firefighters in Ricci v. DeStefano . In 2004, the city threw out the results of a promotions test because no blacks scored high enough to qualify for promotions. The city claimed that had it certified the test results, it could have been sued by black firefighters under the disparate impact provision of Title VII of the Civil Rights Act. The District Court granted summary judgment for New Haven, and an appeals court on which Supreme Court nominee Sonia Sotomayor sits affirmed.

Reversing Sotomayor, Justice Anthony Kennedy contended that New Haven rejected the test results "solely because the higher scoring candidates were white" and added that "[f]ear of litigation alone cannot justify an employer's reliance on race to the detriment of individuals who passed the examinations and qualified for promotions."

The problem began 38 years ago in a Supreme Court case called Griggs v. Duke Power Co. Black applicants disproportionately lacked required diplomas and/or failed the employment tests. The court held that for purposes of hiring, both requirements violated the Civil Rights Act. If an employment practice is "facially neutral," it's suspect if it has a disparate impact on members of a protected class, even if there's no discriminatory intent. To avoid liability, businesses would have to demonstrate that such tests are job-related and a justified business necessity.

Disparate impact puts employers in a bind. Unless all races score equally on racially neutral tests, they'll likely face litigation. Generally speaking, blacks tend to score lower on standardized tests than whites (which doesn't mean blacks deserve special treatment as a result), so as long as such tests are used, employers must lower standards (which also would benefit non-black test-takers) and/or manipulate the results to avoid lawsuits.

I sound like a scratched record, but I must repeat myself: the purpose of the civil rights movement was to remove racial considerations from the hiring equation . The Constitution requires the government to treat citizens as individuals and not as members of racial groups, but disparate impact by definition does the latter. Justice Antonin Scalia points out this inconsistency in his concurring opinion:

The difficulty is this: Whether or not Title VII's disparate-treatment provisions forbid "remedial" race-based actions when disparate-impact violation would not otherwise result—the question resolved by the Court today—it is clear that Title VII not only permits but affirmatively requires such actions when a disparate-impact violation would otherwise result…But if the Federal Government is prohibited from discriminating on the basis of race…then surely it is also prohibited from enacting laws mandating that third parties—e.g., employers, whether private, State, or municipal—discriminate on the basis of race…As the facts of these cases illustrate, Title VII's disparate impact provisions place a racial thumb on the scales, often requiring employers to evaluate the racial outcomes of their policies, and to make decisions based on (because of) those racial outcomes. That type of racial decisionmaking, as the Court explains, is discriminatory.

The government is still mired in race after all these years. America will never "rise above race" as long as employers are forced to engage in racial rigging when hiring and promoting. New Haven felt justified in blatantly discriminating against white firefighters to avoid possible lawsuits filed by black firefighters. Disparate impact is a frustrating Catch-22 for employers, but the Supreme Court made clear that employers will be held accountable for discriminating against whites, too.