The Oldest Man To Go Ashore On D-Day

Larry Provost
|
Posted: Jun 06, 2019 12:01 AM
Share   Tweet
The opinions expressed by columnists are their own and do not necessarily represent the views of Townhall.com. 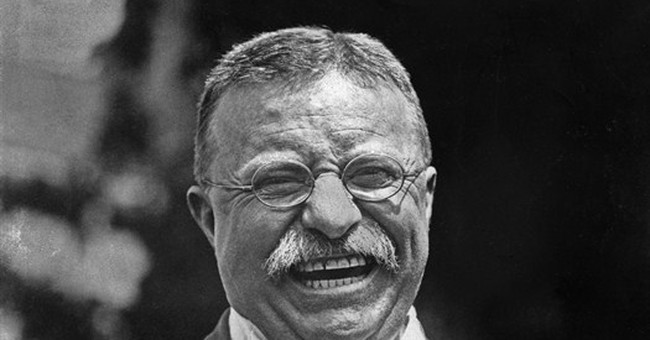 Seventy five years ago today brave men fought on the beaches of Normandy.  Each has their individual story.  While all the individual heroism is impossible to capture, very often the stories that are recorded encompass the grit, determination, and courage that was a hallmark of those who went ashore on June 6, 1944.  One such story is that of the oldest soldier to go ashore on D-Day.  His name was Brigadier General Theodore Roosevelt, Jr.

Theodore Roosevelt Jr, better known as Ted, was the son of the 26th President of the United States.  His father was a war hero who charged up San Juan Hill in the Spanish American War so there was no doubt that when World War I came, the Roosevelts would take part.   Ted Jr. and his three brothers (Kermit, Archie, and Quentin), all joined the war effort and served in various capacities.  Kermit actually served with the British Army before serving with the American Army.   Archie was wounded and retired with full disability.  He later petitioned to join the military again in World War II.  Archie was again wounded and again retired with full disability.   He was the only American soldier ever to be given a 100 percent disability rating for serving in two wars.   Quentin was killed in a combat flight in France just a few months before the war ended.

Ted served in the 26th Regiment of the First Infantry Division and later became the Regimental Commander, acquiring the rank of Lieutenant Colonel.  He was awarded the Distinguished Service Cross and after the war, he was one of the founders of The American Legion.  The members of the newly founded Legion asked Ted to be their national commander, shouting “We want Teddy!  We want Teddy!”  He refused, not wanting to politicize the organization.

Ted later served as a New York State Assemblyman, Assistant Secretary of the Navy, Governor of Puerto Rico, and Governor-General of the Philippines.  No one could doubt that Ted Roosevelt had done his duty for his country.  Yet, he was not done.

Even before the United States entered World War II, Ted petitioned for a return to active duty and returned to the 26th Infantry Regiment, 1st Infantry Division.  He later became Assistant Division Commander under Major General “Terrible Terry” Allen.   They, and their men, fought the enemy with skill and tenacity in North Africa and Sicily.  Unfortunately, both Roosevelt and Allen were relieved by Omar Bradley for being too close with their men and not being disciplined enough, despite their impeccable combat records.

Because of his combat record, Roosevelt was assigned as Deputy Commander of the 4th Infantry Division under Major General Tubby Barton.  By this time, Ted was afflicted with arthritis, chest pains, and complications from his World War I wounds.  Despite this, Ted verbally petitioned Barton several times to go ashore on D-Day as he thought he should be with his men.  Barton said no.   Roosevelt did not have to go ashore but did not give up and put the request in writing.   As Barton gave permission for Roosevelt to land on Utah Beach, he felt he was never going to see him again.

Armed with a pistol and a cane, Ted Roosevelt landed on Utah Beach on June 6, 1944 with his man and made the decision to “start the war from here” when they were landed in the wrong place.  At 56 years of age, he was the oldest soldier to land that day.  He was also the only soldier who had a son who also landed on D-Day as Quentin Roosevelt II landed on Omaha Beach.

For his bravery on Utah Beach, Ted was recommended for the Distinguished Service Cross and was slated to be promoted to Major General and finally was going to be given a division command of his own.

After spending a great deal of time with his son on July 12, Ted Roosevelt was stricken with a heart attack and died in France.  His recommended Distinguished Service Cross was upgraded to the Medal of Honor.  He is one of only two sons who fathers also were Medal of Honor recipients.

Two of the generals who had played roles in previously relieving Roosevelt, George Patton and Omar Bradley, served as pallbearers at his funeral.  Bradley later said the single bravest act he ever saw as a soldier was “Ted Roosevelt on Utah Beach.”

Brigadier General Theodore Roosevelt, Jr. rests in the Normandy American Cemetery and Memorial, next to his brother Quentin who was killed in World War I.

He didn’t have to go to war a second time.  He had already served as Assistant Secretary of the Navy and a Governor.  His family had lost so much already. With his health problems, some would argue that he should not have gone to shore or even been in the Army.  Yet, Ted Roosevelt teaches us a lesson about American grit and determination.  He died doing what he loved and for his country despite his age.  Already an older man who was on his way out when he stepped ashore at Normandy, Ted Roosevelt teaches younger generations a lesson about the meaning of sacrifice and duty.