Larry Provost
|
Posted: Dec 07, 2016 12:01 AM
Share   Tweet
The opinions expressed by columnists are their own and do not necessarily represent the views of Townhall.com. 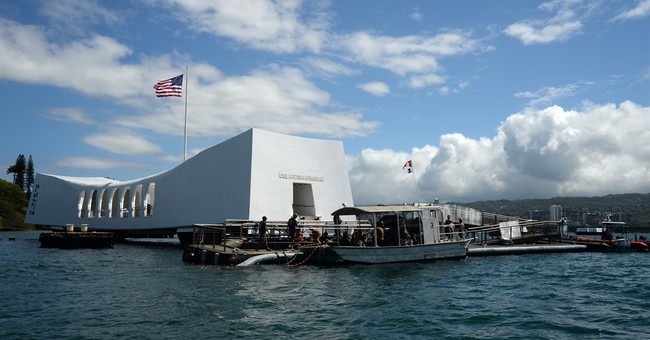 December 7, 1941 is a date that will live in infamy as the United States of America was, in the words of President Franklin Roosevelt “suddenly and deliberately attacked by naval and air forces of the Empire of Japan.” Yet some remarkable things came out of December 7, 1941, such as the bravery of our soldiers. One of the other remarkable stories regarding December 7, 1941 is the role the Bible played in comforting Americans.

To understand the Pearl Harbor Day Bible Story we must turn back to 1940. 1940 was a tumultuous year and horrific year. Denmark, Norway, Holland, Belgium, Luxembourg, and France were conquered by Nazi Germany. Britain and its Empire beyond the seas stood alone against Hitler, who strongly considered invading the tiny island. The Soviet Union was engaged in a war of aggression against Finland and had swallowed up the independent countries of Latvia, Estonia, and Lithuania. Imperial Japan was on the march in the Far East against China and French Indochina. The Great Depression had not yet ended in the United States and Americans were wary of getting involved in another World War.

The White House was impressed enough with the work of the Laymen’s Bible Association that they were invited and scheduled to come to the White House on December 10, 1941. They were also asked to read the Bible on national radio a few days before the White House visit. The date scheduled for the Bible reading on radio was December 7, 1941.

After the Japanese attacked Pearl Harbor, the leaders of the association decided to voluntarily withdraw their invitation to the White House and Frank Kingdon, Honorary Founder and Chairman of the Laymen’s Bible Association, sent the following telegram to President Roosevelt:

“At this time of national crisis, with a whole nation looking to you for guidance and leadership, the Laymen’s National Committee sponsoring (the) first annual Bible week in America, scheduled to meet with you Wednesday December 10th to present you with a Holy Bible in commemoration of this important event, do in consideration of the many problems confronting you hereby waive that privilege. May God bless and guide you in this great emergency. Rest assured this organization will do everything in its power to urge the people of this country to unite and hold steadfast to faith in God and pray that liberty and justice under your guidance will not perish from this earth.”

However, the Laymen’s Bible Association received a phone call asking if they would still read the Bible on air. Only now, instead of continuously being read on air, the Bible would be read to an anxious American public between news reports concerning Pearl Harbor and the subsequent Declaration of War against Japan. The Bible provided great comfort to Americans facing war.

Today the National Bible Association, https://nationalbible.org/ , carries on the work of the Laymen’s Bible Association by continuing National Bible Week as well as assisting with the International Day of the Bible. The Association also presents the annual Witherspoon Awards “to three chaplains of the Armed Forces who demonstrate a unique commitment to Bible reading or encouraging Bible reading in a special way.” Most recently, the Association has produced and given away over 66,000 special Military Bibles with a Spiritual Fitness Manual, to military personnel to help combat PTSD and suicide. Their work, and that of others, must continue.

As America continues in war, this time against an even bolder enemy than Germany and Japan, may the story of the Pearl Harbor Day Bible reading be a source of comfort, hope, and training in righteousness.