Larry O'Connor
|
Posted: Oct 27, 2021 4:15 PM
Share   Tweet
The opinions expressed by columnists are their own and do not necessarily represent the views of Townhall.com. 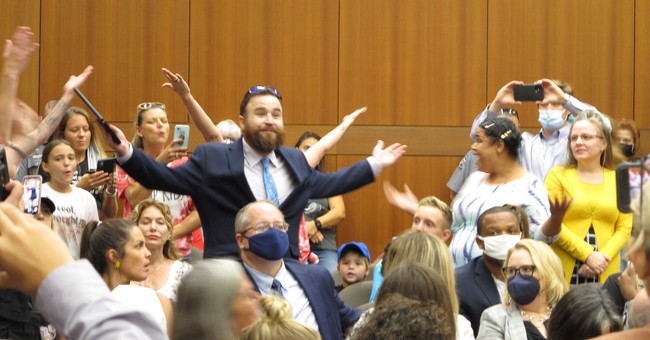 In Arlington, the president of the United States rallied for his fellow Democrat and made the case for Terry McAuliffe's proposed second term running the commonwealth in Richmond. Meanwhile, about 35 miles up the road in Loudoun County, parents stood in line for hours in the blustery autumn night, waiting their turn to speak for 60 seconds each before their now-infamous school board.

Two examples of American participatory democracy in action on the same night. This, in and of itself, is not amazing.

The truly amazing thing is that the anonymous, average citizens speaking out for their children's safety and education upstaged and drew more attention than the leader of the free world. The bigger and more impactful story was a school board meeting.

This is an abject lesson in what our country was always supposed to be about and how it could, possibly, be saved.

Our Founders wanted the power, energy and passion in the citizenry focused on the representative government closest to home. By decentralizing power in the American government, the theory was that we the people would be heard by our representatives on the most intimate, direct level.

And yet, Americans are led every four years by a voracious news media and a cynical political class to believe that our republic will rise and fall on the presidential election and the results of the Electoral College tabulations. We have been convinced that our civic responsibility begins and ends with our support or opposition of a presidential candidate. As long as our guy sits in the Oval Office, we can take the next four years off.

And conservatives fall into this trap, despite our instinctive embrace of federalism.

Parents have been taken advantage of and mocked by the very elected officials whose sole responsibility it is to carry out their wishes on behalf of their children in the schools these parents pay for. Is it any wonder they're righteously pissed off?

From forcing school shut-downs and transfers to unmanageable and ineffective video apps, to resisting the return to normalcy for over a year, to only "allowing" in-class instruction if a 6-year-old wore useless masks for seven hours per day, the school boards have put these families through a hellish nightmare since April 2020.

The pandemic disaster was the spark of this latest firestorm that shone a blazing light on everything these power-mad elitists have been doing to warp our children's futures over the past several years.

Once parents started focusing on these school systems and their inability to figure out how to work around the pandemic (something your local grocery store figured out in a few days), they started to see so many other troubling things.

A peek into the books and lessons their kids were exposed to reveal the insidious philosophy known as "Critical Race Theory" (CRT) that has animated the approach, attitude and even the pedagogy used in the schools we're paying for through forced taxation. The fruits of the CRT approach divides children along racial and ethnic lines and instills in children as young as five the notion that because of the color of their skin, they are inclined and expected to not only behave a certain way but that their inevitable future has been already set because their race assigns them to win or lose because of the systemic racism ingrained in our nation's culture and system of justice.

In short, our kids were being taught a not-so-soft bigotry of low expectations. And it was peddled to us as "Anti-Racism" even though it sure looked like the "Anti" part got lost in the translation.

Finally, these school boards plowed straight ahead with transgender policies that would allow a biological adolescent male to access the most private spaces reserved for young adolescent girls in our public schools: their restrooms and locker rooms.

The most tragic fruit of this misguided policy is the brutal sexual assault of a 14-year-old girl by a "gender fluid" student wearing a skirt to cover their male genitalia (wouldn't want to misgender a rapist).

It's this incident that brought out those righteously furious parents in Loudoun County Tuesday night, upstaging the president of the United States.

The rape occurred in late May. The school board was informed by the superintendent of schools the day of the crime. Several weeks later, the school board and superintendent were debating the system's proposed transgender policy that would codify the permanent victimization of teenage girls in the very same school that just witnessed this horrific crime. At the meeting, the school board members denied knowledge of the very incident they were notified about.

To make matters even worse, the young victim's father wanted to speak at this meeting to voice his objection, and instead, he was arrested before his turn at the microphone and the school board president ordered the room to be cleared. Understandably, the father wanted to have his voice heard, and for that, he was dragged away in handcuffs.

Last week, Barack Obama referred to these debates over the future of our children's public school education as "phony trumped-up culture wars" and "fake outrage."

You have to hand it to him, Obama never misses an opportunity to lie, divide and demonize to advance his narcissistic and destructive agenda. At least he's consistent.

The parents are angry about their schools and they're protecting their children, and for that, they're called liars, bigots, and lunatics. No wonder they're angry.