Larry O'Connor
|
Posted: Oct 05, 2021 12:01 AM
Share   Tweet
The opinions expressed by columnists are their own and do not necessarily represent the views of Townhall.com. 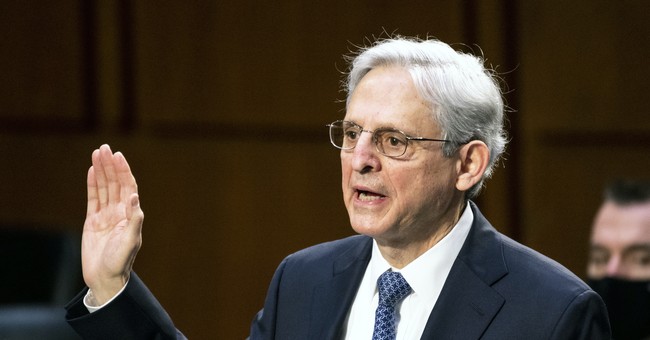 Imagine a left-wing political action committee serving the Democratic Party where the employees carry badges, guns, have arrest power, and can use the FBI and the federal court system to ruin the lives of all who politically oppose Democratic politicians.

Now, open your eyes and look at the Justice Department under the control of Attorney General Merrick Garland.

The DOJ has been hyper-politicized for the Left and Deep State establishment for years now. The use of the FBI under James Comey to investigate the Trump campaign using fake, opposition research paid for by the Clinton campaign is the perfect example of the partisan corruption that has crept into the halls of the DOJ.

Remember, while Comey and his disciples were doing the bidding of the DNC by pulling FISA warrants on a Naval Academy grad who never got a speeding ticket, they were actively ignoring (if not outright lying about) McKayla Maroney's desperate plea for intervention against her serial abuser Larry Nassar.

Last week, we also learned that Comey's FBI had widespread failures in procedures regarding FISA spy warrants that went well beyond the Carter Page debacle. The FBI also let the tips that warned about the Parkland, Florida, school shooting and the Orlando Pulse nightclub terror attack slip through their fingers.

We've also learned that FBI informants were "the moving force" behind the Gretchen Whitmer kidnap plot and were at the front of the line when embedded with the January 6 rioters entering the Capitol.

In short, Garland inherited a broken FBI that had been infected with partisan politics and an agenda to protect and defend their institution instead of the Constitution.

But Garland himself just took the Justice Department to the next – and maybe final – level of political activities by ordering FBI and DOJ attorneys to investigate parents and tax-paying citizens who dare to use public school board meetings to voice their opposition to elected officials who are systematically ruining their children's schools.

In a memo sent from Garland to FBI Director Christopher Wray and United States attorneys on Monday, the AG called for a "partnership among federal, state, local, tribal, and territorial law enforcement to address threats against school administrators, board members, teachers and staff."

"Where spirited debate about policy matters is protected under our Constitution, that protection does not extend to threats of violence or efforts to intimidate individuals based on their views," Garland writes. "The Department takes these incidents seriously and is committed to using its authority and resources to discourage these threats, identify them when they occur, and prosecute them when appropriate."

Did we miss something? Have there been reports of widespread arrests over threats, harassment and criminal behavior over the past several months of spirited school board meetings?

Surely the meetings in Loudoun County, Dallas, Atlanta, and Nashville have received plenty of media coverage for the impassioned pleas and lively speeches delivered by taxpayers and parents concerned over the direction of the schools they're paying for. I'd expect that if there was criminal behavior resulting from these meetings, including threats and harassment of elected officials, local law enforcement in those areas would not keep their investigations and arrests of parents a secret from the media. And surely the media would make quite a display of those arrests.

After exhaustive searches, this widespread criminal behavior could not be found. In other words, the Justice Department is launching an FBI investigation into alleged criminal behavior that hasn't even been reported to local police officers or sheriff's departments in the jurisdictions in which they've supposedly occurred.

How could this be? It only makes sense when one realizes that Garland's memo is not a product of the law or justice or criminal procedure... it is political.

The memo will be used by Democrat Terry McAuliffe to explain his horrendous and career-ending blunder from last week's debate with Republican rival Glenn Youngkin.

"I don't think parents should be telling schools what they should teach," McAuliffe said of the recent passion from Virginia parents over the direction of their once-dominant school system. Within hours, the comment was played on a loop across the media and in Youngkin campaign ads.

It could signal the end of McAuliffe's hopes for election next month.

Merrick Garland to the rescue!

With the contemptible memo calling these parents "domestic terrorists," McAuliffe now has a fig leaf. He can claim that he was referring to those violent criminals that the DOJ is now rounding up, not normal parents concerned about their kids' school.

He'll even go on the offensive. Can you picture the ad?

Garland's DOJ-PAC sure came through.

Further, the outrageous intervention by Garland will be used by local school boards to end public participation in their meetings. Now that the DOJ is involved in a full-blown criminal investigation, they'll not risk further criminal behavior at school board gatherings. The public will be kept home, and their statements will be submitted in writing.

Nice work, Garland. With one memo and his political use of the FBI, he has silenced thousands of parents whose only recourse for their children's education was to speak their minds for 60 seconds at these public forums. Garland has helped put an end to this.

Parents are to stay home and keep their mouths shut about their school boards, lest they face the wrath of the FBI. Message sent, message received.

Merrick Garland has put the final nail into the DOJ and FBI's coffin. It's shameful. The only upside is our nation was spared this partisan fool's lifetime appointment on the Supreme Court.