Larry O'Connor
|
Posted: Jul 23, 2021 2:35 PM
Share   Tweet
The opinions expressed by columnists are their own and do not necessarily represent the views of Townhall.com. 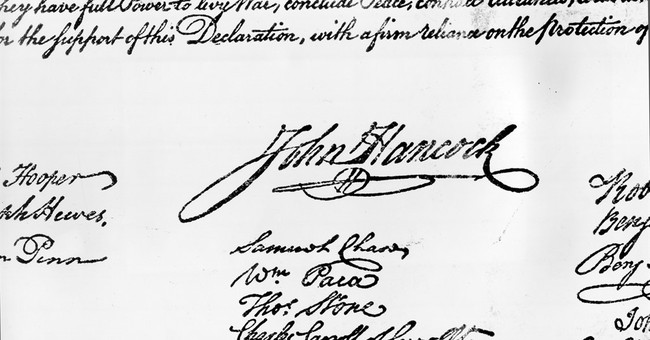 The recent uprisings at local school board meetings across the country against critical race theory curricula have emboldened parents who are fed up with destructive, demoralizing educational approaches from our government-run, taxpayer-funded schools.

We rightly reject the idea that this divisive worldview should be the centerpiece of daily instruction for our children beginning at the Kindergarten level and the battle to prohibit this Marxist drivel is a righteous one, indeed.

But even more important than casting CRT lesson plans to the dustbins of history is to ensure that our elected representatives at the school board and state level have clear guidance as to what our children should be learning and what historical framework should be used in informing future citizens of this great nation.

You see, it's not enough for us to stand up and voice our opposition to what we don't want, we should (when possible) insist on what we do want our tax dollars to be used for, especially when it comes to our government schools and their ability to educate and form the next generation of patriotic citizens.

That's right, relegating public schools to merely educating our children with "the 3 Rs" is a relatively new notion and has really only been utilized by those of us who have been repelled by the attempted social indoctrination of American students by the influence of the radical left in our education apparatus over the past several decades.

There's a reason why radical, American terrorist Bill Ayers transitioned from bombs to education policy, he and his fellow travelers understood the power of the government schools. Conservatives (or, really just non-radicals) were repelled by the influx of agenda-driven instruction in the schools we pay for and demanded that curricula just focus on "the 3 Rs" and get out of the brain-washing business.

But this is misguided.

When our nation decided to invest in a public school apparatus in the 19th century, it was always understood that these civic institutions would be used to not just educate our kids but to also form them into proud, patriotic citizens.

"In the late-nineteenth century, reformers and policymakers across the nation worked to make schools a training ground for loyal patriots. These efforts resulted in several state laws requiring patriotic exercises and the presence of national symbols in schools. This movement garnered substantial popular support and helped create a national “cult of the flag.” The success of these efforts, however, relied on the compliance of school administrators, and most vitally, teachers." - Training the “Grand Army of the Public Schools”: Teaching Patriotism in the Progressive-Era United States

Teaching our children civic responsibility and patriotism is not a problem for our government-run schools. In fact, it should be an essential element. We make a huge mistake by saying our schools should in some way be agnostic when it comes to our nation and its principals.

We are so repelled by the anti-American indoctrination that has infiltrated our kids' lessons that our knee-jerk reaction has been to ask for an "unbiased" approach to education. We should do quite the opposite. We should demand a biased approach to the public education we are paying for.

Enter The 1776 Curriculum from the patriots at Hillsdale College.

Hillsdale's Matthew Spalding was Executive Director of the President’s Advisory 1776 Commission, which produced the 1776 Report during the Trump Administration. This was a direct rebuttal of the insidious 1619 project which attempted the ahistorical re-writing of our nation's founding as beginning the day the first African slaves were brought to Jamestown.

Dr. Spalding and the team at Hillsdale took the framework of the 1776 Report and created the 1776 Curriculum around it.

"The report called for an honest and accurate history of the founding of our country," Spalding says. "We immediately set out to bring to the public a curriculum... having to do with history and civics."

"It's now out there, so rather than merely being against Critical Race Theory which is destroying our schools, we now have an alternative. Here is a good curriculum to advocate."

"They're merely using history as a foil to fight their current political battles," Spalding says of the 1619 project and CRT. "What we're interested in doing is something old-fashioned. We think kids in high school and K through 12 should learn the facts of history. Who are the main figures? What happened? What were its flaws and imperfections? What were its great nobilities and achievements? And to learn how government works."

Does this sound anything like what your kids are currently learning about America in the K through 12 schools you pay for?

And, speaking of paying... the 1776 curriculum is offered free from Hillsdale. You can get the entire thing right here. Download it. Print it. Use it.

It is invaluable.. either for your advocacy for a pro-American curriculum at your public schools or as the curriculum you can use for homeschooling if you've abandoned hope for your public schools. But please, don't abandon hope. These are our schools. We pay for them. We have every right and duty to demand they are used to form the next generation of patriotic, civic-minded Americans. Otherwise, why are we paying for them at all?

Listen to and share my entire interview with Dr. Spalding on the 1776 Curriculum right here.