Trump Has Putin over a Barrel

Larry Kudlow
|
Posted: Jul 08, 2017 12:01 AM
Share   Tweet
The opinions expressed by columnists are their own and do not necessarily represent the views of Townhall.com. 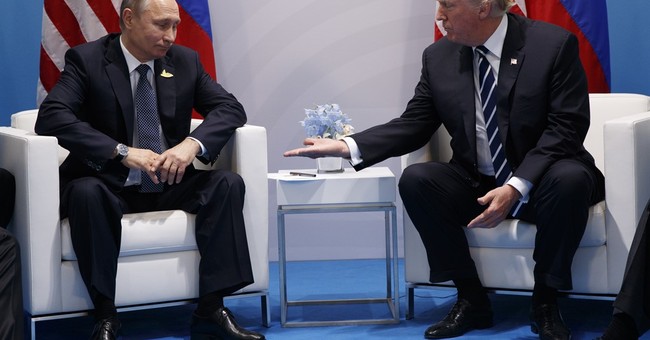 A few years back, in one of his finest moments, Senator John McCain said on a Sunday talk show that “Russia is a gas station masquerading as a country.” It was right when he said it, and it’s even more right today.

Vladimir Putin’s circle of corrupt oligarchs gouge whatever money they can from the impoverished Russian economy and move it to bank accounts overseas. And they do this after giving Putin his cut, after which he apparently also sends the money overseas.

Many say Putin is the richest man in Russia, worth billions and billions. So the old Soviet model of thenomenklatura communist bureaucrats getting rich while the rest of the country declines is still in place.

But with energy prices falling, Vladimir Putin’s Russia has essentially been in a recession over the past four years. With oil at $50 a barrel or less, Russian budgets plunge deeper into debt. It’s even doubtful the Russians have enough money to upgrade their military-energy industrial complex.

Through crafty media relations and his own bravado, a deluded Putin struggles to maintain the illusion that Russia is a strong economic power. But it ain’t so. Not even close.

Now, Russia still has a lot of oil and gas reserves. And it uses this to bully Eastern and Western Europe. It threatens to cut off these resources if Europe dares to complain about Putin power grabs in Crimea, Eastern Ukraine, the Baltics, and elsewhere.

But enter President Donald Trump. In his brilliant speech in Warsaw, Poland, earlier this week, he called Putin’s energy bluff.

It may well have been the best speech of his young presidency. Trump delivered a stirring leadership message, emphasizing the importance of God, freedom, strong families, and democratic values.

And while unambiguously pledging to uphold NATO’s Article 5 -- committing the members to protect one another -- Trump went even deeper: “The fundamental question of our time,” he said, “is whether the West has the will to survive. Do we have the confidence in our values to defend them at any cost?”

He said, “if we do not have strong families and strong values then we will be weak and we will not survive.” He also spoke several times of the religious leadership and bravery of Pope John Paul II.

It was a bold strike for the West.

But in an absolutely key part of the speech, he took direct aim at Vladimir Putin’s energy bullying.

Trump said, “We are committed to securing your access to alternative sources of energy, so Poland and its neighbors are never again held hostage to a single supplier of energy.” Italics are all mine.

President Donald Trump has quickly made it clear that Barack Obama’s war on business is over. He’s also made it clear, through regulatory rollbacks of breathtaking scope, that the Obama war on fossil fuels is over.

Trump wants America to achieve energy dominance. He withdrew from the costly Paris climate accord, which would have severely damaged the American economy. He directed the EPA to rescind the Obama Clean Power Plan, which would have led to skyrocketing electricity rates. He fast-tracked the Keystone XL pipeline. He reopened the door for a modernized American coal industry. He’s overturning all the Obama obstacles to hydraulic fracturing, which his presidential opponent Hillary Clinton would have dramatically increased. And he has opened the floodgates wide to energy exports.

Right now, U.S. oil reserves are almost in parity with those of Saudi Arabia. We have the second-most coal reserves in the world. There are enough U.S. gas reserves to last us a century. We have already passed Russia as the world’s top natural-gas producer. We are the world’s top producer of oil and petroleum hydrocarbons. And exports of liquified national gas are surging, with the Energy Department rapidly approving new LNG projects and other export terminals.

All these America-first energy policies are huge economic-growth and high-wage-job producers at home. But in the Warsaw speech, Trump made it clear that America’s energy dominance will be used to help our friends across Europe. No longer will our allies have to rely on Russian Gazprom supplies with inflated, prosperity-killing prices.

In short, with the free-market policies he’s putting in place in America’s energy sector and throughout the U.S. economy, the business-man president fully intends to destroy Russia’s energy-market share. And as that takes hold, Russia’s gas-station economy will sink further.

And the world may yet become a safer place.

Trump has Putin over a barrel.