Geithner to the Rescue? 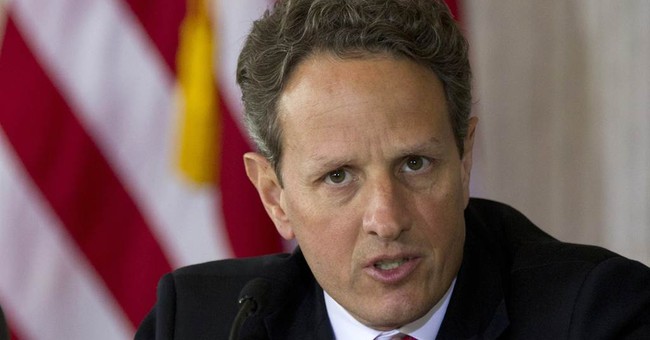 When it comes to Fed policy, one of the hottest topics on Wall Street is the next Fed chair. Who will replace Ben Bernanke? And believe it or not, Timothy Geithner’s name may be resurfacing. Is it possible that the former Treasury secretary will come to the rescue of a leaderless and hopelessly divided central bank that has no real clue where it’s going or how fast it should get there?

Wait a second . . . Geithner? Did someone say Geithner? We thought he retired from government to go home to New York.

Well yes, but not exactly.

A key insider source tells me that Geithner has been leading the search for Ben Bernanke’s replacement. My source, by the way, predicted a Larry Summers boomlet well before Summers’ name became public. And now my source tells me that the only way to end the bloodletting between Fed-chair hopefuls Janet Yellen and Larry Summers is to find a third option. And that third option includes Geithner, as well as former Fed veteran Donald Kohn.

Kohn, however, is a seventy-something old-timer. But Geithner is a huge favorite of President Obama. A recent article in The Hill talks about Geithner as Obama’s right-hand man, and as someone who will be missed if he’s left out of the crucial fiscal and economic battles ahead. And many people on Wall Street say Geithner knows more about financial markets than Summers and Yellen combined.

Geithner, of course, was president of the Federal Reserve Bank of New York during the 2008 financial crisis. And he was an international advisor under Robert Rubin during the world currency crisis of the late 1990s. So Geithner has credentials.

Meanwhile, the whole Yellen-Summers story has become a circuslike fiasco. It’s the most political battle for the supposedly independent Federal Reserve chairmanship that anyone can remember in the hundred-year history of the central bank. Some analysts even believe the big jump in long-term interest rates is partly a function of the Fed losing control of rates in the midst of the Yellen-Summers swingout. (Incidentally, I believe markets, not the Fed, control most interest rates.)

But surely, the Yellen-Summers battle has made Ben Bernanke a lame duck well before his time. His term doesn’t expire until January. But Bernanke didn’t even show up at the big Fed confab in Jackson Hole, Wyoming, this month. It’s the first time that meeting has been chairman-less in 25 years.

So will it be Geithner to the rescue?

Fed policymakers are completely divided over the big question of slowing down, or tapering, the program of $85 billion in monthly bond purchases. Despite rosy Fed staff forecasts, the real economy has grown by less than 2 percent in recent quarters and nominal GDP has advanced only 2.9 percent over the past year. These figures would normally be associated with recession.

And talk of a second-half rebound lacks credibility, with soft back-to-school consumer spending and virtually no business-capital investment. Jobs are rising, but under the threat of Obamacare these are temporary part-time job gains with fewer hours worked than the full-time jobs that would substantially increase incomes.

A few weeks ago there was a tapering consensus for September. Now it looks to be pushed back to December, and maybe even later. And international currency blowups in places like India, Brazil, and Indonesia only complicate the Fed’s thinking.

So right now, the question is this: How long can we stomach a virtually leaderless and directionless Fed?

The answer is not long. And perhaps the solution -- and I say perhaps -- is Obama-favorite Tim Geithner.

Conservatives have never trusted Geithner because of a late-tax-payment problem that surfaced during his Treasury-confirmation period. But he has long apologized for that and has paid his liabilities. Bigger problems for Geithner include his participation in the Wall Street bank bailout and his continued advocacy of the unpopular Dodd-Frank regulatory law.

While I completely disagree with the former Treasury man on Too Big to Fail and tax hikes on the rich, he’s a very bright guy who understands financial markets, and who has always been accessible to conservatives like myself who may disagree with him.

My biggest problem, however, is that I have never heard him talk about a rules-based monetary policy. Whether it’s the Taylor rule, a gold-commodity value-of-the-dollar rule, or a nominal-GDP target, the Fed desperately needs discipline and clarity as it wiggles out of its bloated $3.5 trillion balance sheet and charts a long-term course of stable money.

Geithner may have thoughts on these things, but so far as I know, he has never articulated them. What can be said is that today’s Fed is in a very unstable position, which is not good for markets or the economy. The sooner the president can end this Fed-choice thing, the better.