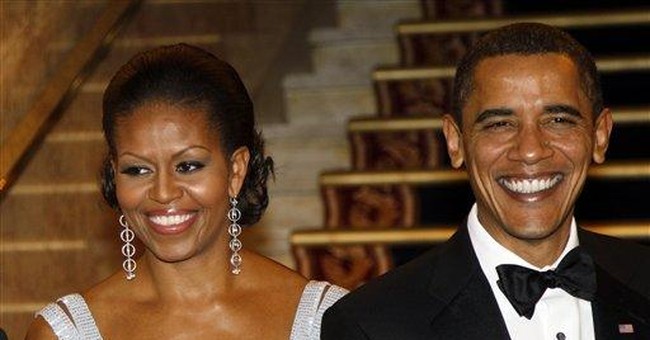 First the good news on the economic recovery that everybody loves to hate:

Retail sales totally beat Wall Street estimates with a huge 1.3 percent gain in November. Core retail sales have increase 5.6 percent at an annual rate over the past three months. Family net wealth has rebounded $5 trillion over the past six months. Jobless claims keep trending lower. Business sales, up 1.1 percent in October (the latest data), have jumped 10.1 percent annually over the past three months. And business inventories, led by manufacturing, also rose in October.

The data suggest that fourth-quarter real GDP could come in at 4 percent or stronger. And the powerful rise in business sales -- leveraged off big productivity gains -- suggest a very strong profits picture.

Profits are the mother’s milk of stocks and the economy -- the only true form of stimulus. Profit naysayers argue that only severe cost-cutting and downsizing have led to better earnings. But the rise in business sales spells top-line revenues, a very positive sign.

These recovery signals should put some pressure on Helicopter Ben Bernanke to stop his free-money policies at the Fed. So should November import prices, which rose 1.7 percent. Driven by the declining dollar (until recently), import prices have increased in eight of the past nine months for a 10.1 percent pace.

Economist John Ryding points out that import-price trends are closely related to consumer-price trends. The message? Inflation is going to pop up in 2010.

Of course, nobody knows if Helicopter Ben will begin tightening sooner than expected. But if he listened to market-price signals -- like the sinking dollar and soaring gold -- he’d be a smarter Fed chairman.

No, all is not rosy on the economic scene. Besides the inflation threat, tax rates are going up in January 2011.Congress wants to raise the capital-gains tax on investor partnerships and elevate the death tax for inheritance. Both will suppress capital formation and entrepreneurship. So will Democratic plans to raise the top personal tax rate as high as 45 percent. This is another attack on the capital and investment necessary to finance new and existing businesses.

President Obama wants a zero cap-gains tax rate for small-business investors. That’s good. But it’s a small incentive compared to the tax hikes on the table.

The bottom line? We’ll see a modest recovery, perhaps running around 4 percent in 2010. But it should be closer to 8 percent following the Great Recession. Job creation will pick up and unemployment will decline a bit. But the threats of higher future inflation and taxes will become increasingly troublesome.

The failure of Washington to understand that capitalism requires capital is a big dilemma. All this government spending and planning drains the investment that is necessary for a truly strong and sustainable economic recovery.

In the short run the economic news is good. In the longer run, we’re staring at a European-style socialism-lite model that places government above private investment. Hence, animal spirits may be dulled, along with Schumpeterian gales of creative destruction. A top-heavy government sector will steadily reduce the economy’s potential to grow and raise the inflation rate as too much money chases too few goods.

Yes, the dollar has improved in recent weeks on the strength of better economic data. And gold has sold off about $100. But it’s hard to expect real King Dollar–confidence unless current government-spending policies are reversed.

An important USA Today story about boom times in the Beltway underscores all this. The paper revealed this week that the number of federal workers earning six-figure salaries exploded during the recession. The number of federal pay caps eased, while pay hikes proliferated -- all while the private economy suffered massive job loses.

According to Chris Edwards at Cato, there are now 383,000 federal workers earning six-figure salaries, and 22,000 earning salaries over $170,000; the number of civil servants making $100,000 or more has jumped over 46 percent since the start of the recession; and the average federal-worker’s pay and benefits is $120,000, double the comparable $60,000 package in the private sector. Edwards also reports that Recovery Act funding has created 407,000 government-contract jobs.

All this helps explain why long-term economic growth is likely to slow to a 2 percent zone, rather than cruise in the 3.5 percent zone of the 1980s and 1990s. The primacy of government over private enterprise has been tried, and has failed dismally.

I remember when Pres. Ronald Reagan talked about “we the people,” borrowing from the Preamble to the Constitution. To the Gipper, “we the people” meant the government works for us -- we don’t work for the government. It’s our money. And we should get it back through tax cuts whenever possible.

Mr. Reagan was talking about economic freedom. Unfortunately, that freedom is becoming a scarce commodity.