The Economics of a Three-Race GOP Sweep 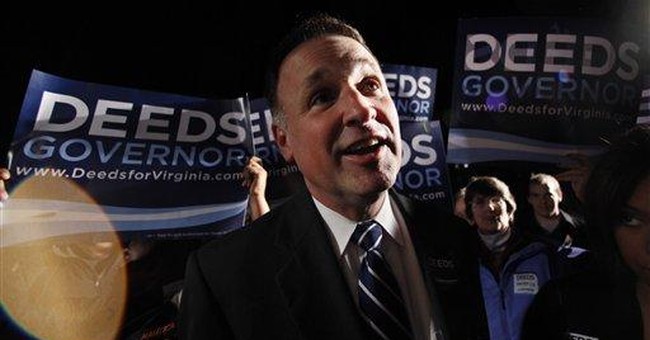 Against the backdrop of high unemployment and a public revolt against a Democratic health-care bill -- which would significantly increase taxes, slash Medicare spending, and massively raise health-care spending elsewhere in a government takeover of our leading growth sector -- a three-race sweep by Republicans is very much in play this Election Day.

The Intrade pay-to-play betting/investment parlor shows big wins for Bob McDonnell in Virginia and Doug Hoffman in upstate New York’s 23rd congressional district. The New Jersey race for governor is too close to call, with the probabilities swinging wildly. Late last night, Chris Christie’s victory probability was 56-46 over Jon Corzine, a 16-point gain for the Republican. This morning, Christie showed a 55 percent chance of victory, with Corzine at 47.

It’s interesting that early signs of economic recovery are not helping the Obama Democrats. This is largely because of the 9.8 percent unemployment rate, which is expected to move higher. Even the crazy jobs-saved-or-created campaign is having no discernable impact while the Obamacons try to fight the unemployment rate.

If you go to recovery.gov, the official stimulus website, you’ll find that there has been $207 billion in stimulus spending through October 30, 2009 -- including $84 billion in tax benefits, $52 billion in contract grants and loans, and $71 billion in entitlements. So even if we give my friend Jared Bernstein his highly flawed “one million jobs saved or created,” that’s $207,000 per job in an economy where the average wage is about $46,000. Not good. Wasteful and ineffectual spending. (In reality, tax credits are spending. For incentivizing, you need marginal tax-rate cuts.)

Mike Flynn of Breitbart’s biggovernment.com notes that the government pumped $170 billion into the third-quarter economy. But GDP grew by only $150 billion. As I said, ineffectual spending.

That doesn’t meant the economy isn’t rebounding. It is. Glitches and all, third-quarter GDP popped up 3.5 percent at an annual rate after inflation. Statistically, the recession is over. That’s good. And it corroborates the big stock market rally over the past seven months. This is going to be a business-led recovery as self-correcting firms build profits on top of huge cash flows.

Yesterday’s ISM manufacturing report for October also confirms the growth trend with a recovery reading of 55.7, the strongest since April 2006. And this morning’s factory orders for September also show a stronger-than-expected gain. Even car sales are expected to rise in October by more than ten million, at least one million better than September. Ford, which refused to take TARP bailout money, reported a surprise increase in profits.

But the depreciating dollar remains a storm cloud over recovery. So are scheduled tax-rate increases and health-care legislation that will slam individuals and firms with higher tax burdens and higher tax costs for job creation.

And then there’s the Federal Reserve. With gold up another $25 -- setting a new nominal record of $1,079 -- the Fed will release a policy statement tomorrow, one that is likely to continue a program of massive money-pumping and a zero interest rate.

This whole Obama policy mix of huge government spending and a depreciating greenback is all wrong. It’s pro-inflation, not pro-growth. For a true economic recovery, we need a stable King Dollar and lower marginal tax rates to incentivize job creation.

Jimmy Pethokoukis and others have noted that the first recovery quarter under Reagan was better than 8 percent, not 3.5 percent. In fact, the average real GDP growth rate for the first quarter of the ten post-war recoveries is 7.3 percent.

So the economic-recovery story, and even the stock market rally, won’t bail out the Obamacons today, although it remains to be seen whether a free-market, anti-tax-and-spend message will emerge from a three-election sweep by the GOP. If so, it could doom the so-called health-care reform that has become a symbol of the leftward-tilting, big-government, economic-control policies emanating from Washington.