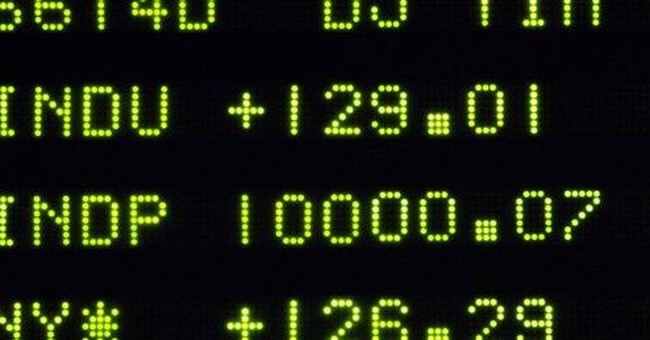 Dow Jones 10,000 arrived on Wall Street Wednesday for the first time in a year. It's a milestone of sorts, and it certainly represents a vote for investor confidence in economic recovery. Blowout profit reports from Intel and JPMorgan helped fuel the day's 145-point gain. So did a retail sales report that excluding Cash for Clunkers was actually quite strong.

Profits are the mother's milk of stocks, business, and the economy. And top-line sales revenues now appear to be bolstering the corporate cost-cutting effort. As long as these earnings keep coming in strong, stocks will keep rising. My hunch is that we'll move back to pre-Lehman levels - to over 11,000 on the Dow and over 1,200 on the S&P. Backed by an easy-money Fed, the economy will probably grow in a mild V-shape of something like 3 to 4 percent for the next year or so.

But storm clouds are gathering.

One of the biggest clouds out there is the sinking dollar. What we’re witnessing right now is a big global shift out of dollars and into commodities. The dollar is quickly losing its reserve status to the yen and the euro. The proof is in the pudding: Earlier today, the greenback notched a new 14-month low against the euro. This is not good.

Meanwhile, in the second quarter ending in June, central banks around the world invested 63 percent of their new cash reserves into euro and yen, and put only 37 percent into dollars. And over the past six months, the greenback has lost 15 percent while gold has climbed nearly $150. If this trend continues, spiking inflation and interest rates will choke off the stock market rally and do serious damage to the economy. It could happen very fast.

No one in the Obama administration or at the Fed seems to care about any of this. In fact, they are probably applauding the lower dollar as a sort of 1970s way of boosting exports and the manufacturing heartland in the Midwest. But the falling dollar is bad news for consumers. It will ultimately cause higher inflation, as signaled by the rising price of gold.

There are also future tax hikes looming out there, as well as the enormous explosion of government spending and debt. All of this is why it's hard for me to be a long-term bull.

The great market boom between 1982 and 2000 was basically characterized by low marginal tax rates and a strong King Dollar. Unfortunately, the 21st century has witnessed a weak dollar and, more recently, rising tax rates that are coming due in 2011 (if not sooner). In other words, the prosperity-inducing Mundell-Laffer supply-side model is being reversed.

As economist Art Laffer put it to me, we are stealing demand and production from the future. So, even as we get a V-shaped recovery now and into next year, 2011 may finally pay the piper for both low growth and higher inflation.

What we need to be doing is exercising some monetary restraint to save the dollar. The Fed should start moving excess cash from the economy. They should follow Australia’s lead and begin raising their target rate. In addition, the Treasury ought to be buying all these unwanted dollars in the marketplace. And Washington needs to quit their explosive spending and borrowing. It is killing us. Some statutory — or even constitutional — limits should be set.

We also need economic-growth incentives like lower marginal tax rates which would benefit investors, entrepreneurs, and workers. We should be slashing tax rates on large and small businesses across-the-board.

Stocks could have another four to six months left to rally. That would be great news for increasing the wealth of the investor class, and maybe even enhancing the animal spirits a bit. But the policy mix is all wrong right now. Health-care entitlements and taxes punctuate the wrong-way policy mix.

What remains to be seen is whether the Republicans can successfully challenge the Democrats with a true supply-side economic-growth message and job-creating platform. If not, beware of the storm clouds.