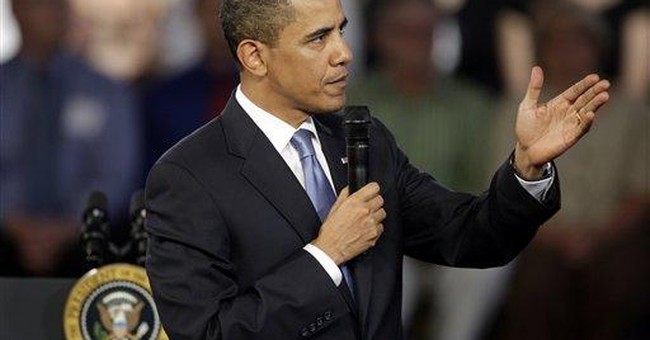 In the early 1980s, Ronald Reagan’s popularity and policies moved American politics firmly to the right. In only 100 days, Barack Obama’s politics and policies have shifted America way to the left.

The president is seeking to change the whole relationship between the government and the free-enterprise private sector. He is steering the country away from democratic capitalism and toward his big-government command-and-control vision. We are witnessing a triumph of government bureaucrats over entrepreneurs, investors, and small businesses.

And with Sen. Arlen Specter switching from Republican to Democrat, Obama can now move the nation even further to the left. A filibuster-proof Senate will mean even greater economic restructuring with expanded government control of health care and energy and increased unionization.

This looks very much like a war against investors, businesses, and entrepreneurs. Shareholder rights are being eviscerated. Political decisions are replacing the rule of law, the rule of bankruptcy courts, and free-market principles.

We are witnessing more spending, deficits, and debt-creation than anyone ever imagined. Bailout Nation has run amok. This started under Bush, but Obama is raising the stakes exponentially.

The latest federal budget would double the debt in five years and triple it in ten. For some perspective, that debt level is higher than the combined debt levels generated under every president from George Washington to George W. Bush. According to the CBO, federal debt held by the public as a percentage of GDP under Obama is projected to rise to 82 percent in ten years. The budget deficit itself never drops below $670 billion and closes the period at $1.2 trillion. That’s nearly a 6 percent share of the economy.

All of this will certainly lead to large tax-rate hikes that will rob incentive power from entrepreneurs, investors, and small-business owners. Just look at Britain, where the top tax rate has been raised to 50 percent from 40 percent. The Thatcher Revolution is being repealed over there. Unless current trends are reversed, the Reagan Revolution will be repealed over here.

The Obama budget already will raise taxes on overseas corporate earnings and oil-and-gas companies at home. It will elevate taxes on capital gains and dividends for investors and will lift the top tax rate for successful earners. And more is coming.

But this is the wrong direction for economic growth. Instead, business tax rates should be slashed -- which, by the way, would repatriate corporate earnings for domestic investment. We need a capital-gains tax holiday. We should be flattening individual tax rates across-the-board. And all manner of loopholes and special-interest deductions should be repealed to broaden the taxable-income base.

Nowhere is the Obama vision of government interference more evident than on the banking front. The White House and Treasury are using TARP as a bullying club to force government control on the country’s financial institutions. There is no exit strategy; no endgame in sight. Quite the opposite: News reports suggest that six major banks could be subjected to government ownership, putting them in the same club as Fannie Mae, Freddie Mac, AIG, GM, and Chrysler. This reminds one of Francois Mitterrand, the former socialist president of France. It’s way outside the American economic tradition.

And TARP itself is riddled with criminal-enterprise undertones. According to Special Inspector General Neil Barofsky, the $700 billion TARP program -- which has ballooned to more than $3 trillion in spending, loans, and loan guarantees -- is “inherently vulnerable to fraud, waste and abuse.” Barofsky already has opened 20 separate TARP-related criminal investigations and six audits into whether taxpayer dollars are being stolen or wasted. Rest assured that they are.

Economic recovery is still likely in the second half of the year. And President Obama will claim victory for his big-spending policies. But the reality is much different. Massive Federal Reserve pump-priming is moving the economy from deep recession to some kind of recovery. Meanwhile, the combination of deficit spending and easy money increases the threat of stagflation.

Will Republicans take advantage of the wide opening created by Obama’s 100-day lurch to the left? So far the GOP has produced only fragmented policy alternatives and no central spokesperson. That’s not unusual for the party out of power. But the Specter defection underscores the GOP’s sagging fortunes.

Right now, the most promising Republican leader -- at least in a policy sense -- is former Vice President Dick Cheney. His attack against the release of the CIA interrogation memos and his forceful call for the release of the information gathered during those interrogations -- facts that helped keep America safe after 9/11 -- clearly rattled Team Obama. Mr. Cheney should now launch a counterattack on Obama’s tax-and-spend New Deal/Great Society enlargement of government power.

It would make for delicious irony, but Dick Cheney may be most effective spokesperson the GOP has.