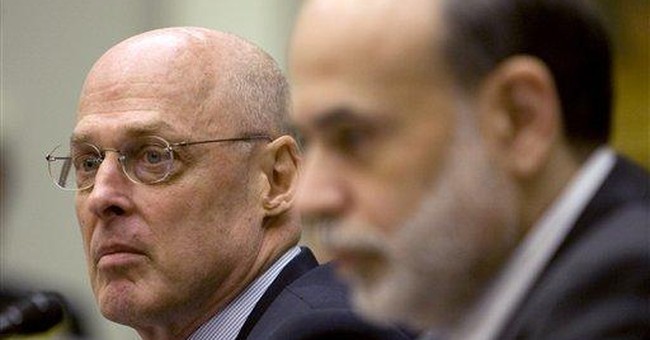 Treasury Secretary Henry Paulson has called for a pause in the financing request for the Troubled Assets Relief Program (TARP), halting it at $350 billion. (The original request was for $700 billion.) I think that’s an excellent idea. But in a recent hearing of Barney Frank’s Financial Services Committee, Democrats went ballistic at the thought of no more TARP money. They want to keep spending. They want to throw money at GM, the other Detroit car makers, plumbers, auto-parts suppliers, homeowners, mortgage problems, and foreclosures. Candy stores all over America now want TARP money.

Meanwhile, Senior Obama advisors are talking about another $600 billion to pull us out of recession. Some reports even suggest the development of a new industrial policy for big-government interference in housing, banking, energy, autos, and more.

But all this brings up a whole new problem in American finance: How are we going to transport and deliver trillions of dollars of new government money? It’s not an easy task. We’ve moved beyond show me the money. This is throw me the money. And shovels alone won’t do.

We’ll need to convert Caterpillar earth movers into money movers. We’ll need new streamlined helicopter fleets to drop money from the sky. We’ll need a trucking armada and full use of the railroads. And we’ll need an army of smaller trucks and SUVs to reach folks in the off-road areas. And let’s not forget FedEx and UPS -- we’ll need them to make sure the money arrives on time.

We may even need high-level planners at the Department of Transportation to help coordinate this vexing money-delivery problem. Sending out trillions of dollars may sound great to your average liberal Congress member. But this will not be easy. Perhaps the transitioning Obama administration can designate a Transportation Monetary Tsar. These logistical realities must be dealt with.

Or maybe there’s a better idea: Maybe we take Mr. Paulson at his word but go one step further. Let’s stop any new TARP money -- period. Enough is enough. The TARP has already done some good. Banks have more capital. Credit spreads in the money markets are narrowing. And there even are signs that business and consumer loans are flowing once again. So let’s cap the TARP -- or tarp the TARP.

The new congressional Keynesians believe government can spend us into prosperity. They’re wrong. Everything we have learned in the last four decades tells us that governments don’t create permanent new jobs or capital investment. In fact, the more we spend, the more we’ll have to raise tax rates. And that depresses growth. Europe went down this road and failed. So did Latin America and parts of Asia before they wised up.

And for some reason no one in Washington is talking about cutting tax rates, which would strengthen incentives to work, invest, and take new business risks. We should be making it pay more after tax for entrepreneurial activity of all kinds. How about this: Let’s get back on the path of free-market capitalism.

Even at the G-20 meeting in Washington this past weekend, all one heard was “global fiscal stimulus” -- or more spending on a worldwide scale to fight recession. It won’t work. It never has. Hundreds of academic studies over the past 25 years show clearly that countries that spend more, grow less; but that nations that tax less, grow more.

Why these lessons have been forgotten is beyond me. We have to restore market discipline and personal accountability. We should reward the economic good, but punish the bad. Instead we have launched a demoralizing government-spending nymphomania.

Incidentally, all this talk of big-government bailouts and a never-ending flow of government spending has disheartened the stock market, which is now down five of the past seven days. Since the November 4 election, the Dow is off 15 percent, or more than 1,400 points.

All this shows why, like the grounds crew at a baseball stadium on a rainy evening, we need to roll out the tarpaulin in order to preserve the field. To safeguard today’s economic field, it’s time to tarp the TARP. Let’s stop right here at $350 billion before everyone in the country demands a piece of the new TARP action. At the same time, let’s cut taxes to grow the economy. Slash the corporate tax rate. Reduce personal rates across-the-board. Promote investment with a lower capital-gains tax and a lower estate tax. Let’s restore the incentive model of economic growth.

Current political trends in Washington are gonna push us off some left-wing economic cliff. Instead, let’s have some sanity. It’s time for a reality check about what works and what doesn’t in fighting recession and promoting long-term economic growth.

I say tarp the TARP.