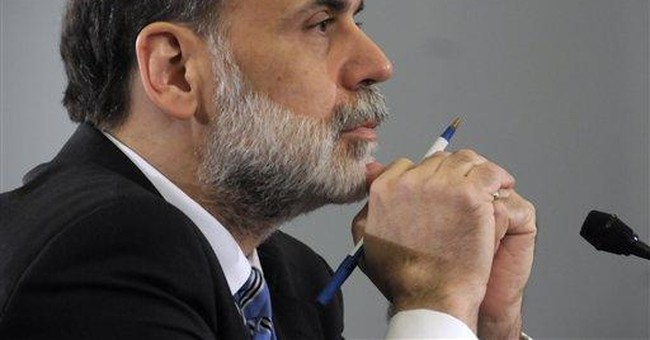 Charlie Plosser, president of the Philadelphia Federal Reserve Bank, warned this week about the risks of inflation, overly aggressive interest-rate cuts and further damage being done to the Fed's credibility. I agree with Plosser.

I say this as a supporter of the "shock and awe" Fed policies that brought the fed funds target rate down from 5.25 percent to its present 3 percent. These aggressive actions were necessary, and they've paid off. The target rate is now properly below the 10-year bond yield, while the Treasury curve is upward sloping for the first time in nearly 20 months. The overly tight money period of 2006-07 has finally come to an end. And even though in its aftermath the economy could skip into mild recession, this is a positive, watershed event.

Most economists ignore the fact that the subprime credit crisis, along with the extraordinary downturn in housing construction and home prices, is largely the result of the Fed's massive tightening move that lifted the funds rate above 5 percent in the first place. Fed Chair Ben Bernanke inherited this bucket of smelly molasses from his predecessor, Alan Greenspan. In straightening the situation out, Bernanke has opened the door to a rapid economic recovery. It's a signal achievement for the former Princeton professor.

Bernanke has taken a lot of criticism in the last year, and I think much of it is undeserved. Wall Street claims that he's an isolated academic, unaware of the real-world difficulties of sagging capital markets, slumping stock prices and slowing growth. But he moved aggressively once he saw the credit problem develop last summer. And new information obtained under the Freedom of Information Act reveals how he has been meeting with leaders in business, finance and government all along.

He has talked with John Chambers, the CEO of Cisco Systems, Sam Palmisano, the head of IBM, JPMorgan chief Jamie Dimon, former Senate banking head Phil Gramm, and international central bankers Jean Claude Trichet and Mervyn King. The street was wrong about Bernanke. He's been on top of the situation. He took remedial action, and the economy will be the beneficiary faster than people think.

But here's his next challenge. Bernanke needs to end the stop-and-go policies he inherited from his predecessor. Greenspan became a supreme monetary tinkerer in his final years, putting the Fed's interest rate and monetary levers in constant overdrive. Go. Stop. Go. Stop. This Keynesian central planning has damaged the Fed's credibility. It has weakened the dollar. Entrepreneurs and investors can't possibly plan ahead when interest rates bob up and down like yo-yos.

I suspect Charlie Prosser was referring to all this when he talked about the Fed's credibility this week. If so, he's right. So let's say goodbye to Fed tinkering once and for all, and say hello to permanent enhancements to the economy's incentive structure. How about lowering tax rates on corporations? How about lowering the corporate capital-gains tax rate? Why not abolish the individual capital-gains tax? Or the dividend tax? Or the estate tax? Why not eliminate the multiple-taxation of savings and investment?

At some point, the entire corporate tax structure should be thrown out, along with all the murky K-Street tax-earmark loopholes that litter the IRS code. We need to broaden the tax base and lower marginal rates. This is the key to maximizing future economic growth on the supply side. Without strong tax-reform measures to expand the production of goods and services, further Fed money injections are only demand-side "solutions" that will surely inflate prices and depreciate the currency.

Back in the 1970s, policymakers in Washington were obsessed with increasing aggregate demand, but they forgot about aggregate supply. Today's short-term-stimulus rebate package is a throwback to that era. It's not economic stimulus, it's political stimulus. Congressmen up for re-election are trying to "do something" in response to primary-season exit polls that say Americans are totally unhappy with the economy. But these rebates are budget busters. And how will Congress attempt to pay down $400 billion in budget deficits? Higher tax rates, of course. And then we'll really be back in the 1970s.

Out on the campaign trail, Sen. Hillary Clinton has a Nixonian idea to freeze interest rates on subprime mortgages. Exactly wrong. Doing so would cause financial havoc at home and abroad. Perhaps Sen. McCain, who is now campaigning as an heir to Ronald Reagan, will argue for strong, pro-growth tax reform to expand the economy and a steady monetary policy to protect the dollar and reinforce domestic price stability. One can only hope.

But if Bernanke can officially put the yo-yo interest-rate days behind us, we're halfway there.

Putin Asks Reporter If US 'Assassinated' Ashli Babbitt
Townhall
'I'd like to report a murder': Daily Caller gives Chris Cuomo some more fact-checking assignments after he suggests they'd 'perpetrate a fraud' [screenshot]
Twitchy
Vladimir Putin Asks NBC News Who Ordered the Assassination of Ashli Babbitt by the Capitol Police
Redstate
INFIGHTING: Harris vs. Biden Over Who Owns the Border Crisis
PJ Media