The Dangers Facing Trump and Those He Will Govern

Larry Kelley
|
Posted: Dec 09, 2016 12:01 AM
Share   Tweet
The opinions expressed by columnists are their own and do not necessarily represent the views of Townhall.com. 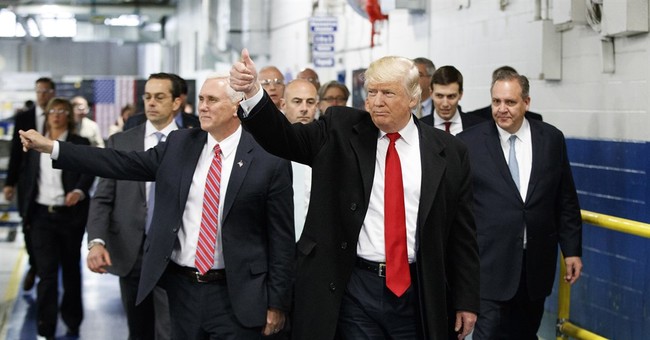 On inauguration day, due to his predecessor’s many foreign policy failures, Donald Trump will inherit a much more dangerous world than the one Barack Obama inherited eight years previously. Despite the fact that Obama pledged to end America’s wars, the US is waging three active wars, Iraq/Syria, Afghanistan, and a worldwide fight against jihadis that ranges from the tribal regions of Pakistan, to Libya, Sinai, Yemen and even within our own borders.

The dangers to the US which Trump will need to confront will not be limited to its active wars.  Obama’s agreement with Iranian Mullahs released to them over $100 billion, emboldening the world’s leading state sponsor of terrorism to step up its drive to dominate the Persian Gulf.  Obama’s hapless inability to deal with Putin has offered the revanchist dictator a green light to bully Eastern Europe, in his quest to reconstitute the old Soviet Union.  More Ominously, Russia has now actively allied with Iran, selling it anti-aircraft weapons systems designed to take out US and Israeli jets should war commence. On his watch, North Korea has formally also allied with Iran, sharing with it nuclear weapons and ballistic missile technology while closing fast on its own acquisition of long-range missiles able to reach the US.  And finally, China is aggressively building its military arsenal and rapidly extending its hegemony over the South China Seas.

I have just completed the second volume of Lessons from Fallen Civilizations which grew out of my response to 9/11. Combined, the two volumes seeks to understand the causes of 9/11,  to explain why 19 Muslim men and their Islamist planners wanted to kill thousands of innocent Americans and finally what role did Islam itself play in that event. I have met many people from both sides of the political spectrum who believe that the “war on terror” can’t really be won. That Islamic-inspired terrorism is something to be managed and that we’ll simply need to live with it. This two-volume set is a warning to the West which states that if we succumb to complacency and or bad decision-making, we can be destroyed by a consortium of resurgent militant Islam and its allies. To quote the late great Tony Blankley, “We’ve lost the margin for error.”

In being fair to the legacy of Barack Obama, as he prepares to leave office,  Iraqi military forces combined with American Special Forces and airpower, are poised to retake from ISIS (Islamic State in Iraq and Syria) Mosul, the largest city in Northern Iraq. Senator John McCain condemned the Obama strategy of “incrementalism that rarely wins wars but could certainly lose one.” But as David French who fought in Iraq wrote in his National Review piece, A Second Chance for Iraq, “…it looks as if incrementalism will soon yield a rare win—at least in Iraq.”

The fall of Mosul would mean that ISIS would no longer control any major population centers in Iraq and greatly damage its ability to claim that it was the new Islamic Caliphate. Yet it is important to note that a defeat of ISIS in Iraq will only be achieved by Obama reneging on his promise that all would be well if he just ended George Bush’s wars in Iraq and Afghanistan and pulled our troops out.

By November of this year, French reported there were 4,460 combat brigade troops on the ground in Iraq and presumably a nearly equal number of aviators and their control and command structure supporting them in the air campaign.  This buildup which began in 2014, with acquiescence from the mainstream media, was done with no fanfare whatsoever because it was hardly what Obama promised and what his voters thought they had purchased.

Nevertheless, as ISIS is about to be expelled from Iraq, it will be denied sanctuary there and the revenues commensurate with controlling a significant portion of the Iraqi populous. This would be a defeat both militarily and psychologically for resurgent militant Islam, a win for Obama and the West in the clash of civilizations. But with Obama’s slow incremental approach to defeating ISIS, he allowed the most vicious terrorist organization ever conceived two years to recruit and train thousands of terrorists some of whom have been deployed to Western Europe and the US.  In this sense it was also something of a defeat for the West.

With respect to Afghanistan, as Obama prepars to leave office, he has managed to begin losing a war that George Bush’s military had already won a decade earlier.  Sadly six of Afghanistan’s 34 provinces are in danger of falling to the Taliban.  Three of its largest provinces, Kunduz, Helmand, and Farah were only recently saved by last minute deployments of Special Forces to their capitals aided by air fire power.  As in Iraq, Obama’s decision to draw down our troop strength too severely and too rapidly, despite the protestations of his military advisors, has created the vacuum that’s once again is being filled by our Islamist mortal enemies.

While ISIS is losing territory in Iraq, it has already migrated to many other Islamic countries where it finds turmoil an opportunity for safe haven. With Obama’s slow incremental approach, combined with his infantile desire show the world he could take our troops out of theaters they had fought so hard to win, he wasted the lives lost in those struggles and made the world much more dangerous than when he took office. Given the foreign policy failures of his predecessor, numerous security crises face Trump on his inauguration day.