Tiger Woods Is Back. Told You So

Larry Elder
|
Posted: Apr 18, 2019 12:01 AM
Share   Tweet
The opinions expressed by columnists are their own and do not necessarily represent the views of Townhall.com. 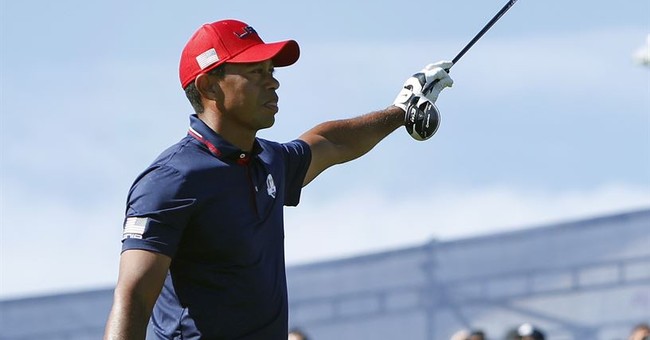 From 1997 to 2008, Tiger Woods dominated the world of golf, winning an extraordinarily high percentage of the tournaments he entered. Woods' illustrious golf career included wins in 14 majors, just four short of tying Jack Nicklaus' all-time record. Then came the revelation and scandal about Woods' double life. Publicly, he was a devoted husband and father; privately, he was a serial cheater. He suffered a series of injuries, resulting in four back operations since 2008, and an embarrassing arrest -- with an accompanying mugshot -- for driving while under influence of the prescription drugs found in his car. Many gave Woods' career up for dead.

At the time, a friend of mine declared, "Tiger's finished."

Well, after not winning a major for 11 years, and not winning the Masters in 14, Woods won just the Masters. About the alleged end to Woods' career, here's what I wrote in 2009:

Will Tiger Woods lose endorsements? Yes. How many and for how long remain open questions. Has the carefully groomed image of the contented family man who "has it all" gone supernova? Absolutely. Will he lose his wife, given her public humiliation and her shattered trust in her husband? Strong possibility.

But the history books are full of Act 2s.

As more bizarre things surface -- the growing number of alleged mistresses, his mother-in-law's hospitalization, the recklessness of his behavior -- new revelations may start producing diminishing returns in shock value. People will wonder whether he's a really rotten guy with a phony stage-managed image or a really sick guy who "needs help."

Former President Bill Clinton is the only elected president ever to be impeached. Does Clinton draw down the window shades, only to venture out under cover of night to go to the ATM? Please. He blamed the Republicans, who wanted to "overturn elections." When Clinton first ran for president, he admitted on "60 Minutes" he'd had "problems with his marriage." People interpreted this as an acknowledgment of previous cheating with a promise to sin no more. But he did. He lied to the country about it. He lied about it under oath. Today he strolls around the globe, an elder statesman whose opinions are sought out and somberly considered.

The Rev. Jesse Jackson, in the midst of Clinton's crisis, went to the White House to serve as a presidential "mentor." Jackson brought his visibly pregnant mistress, and both later posed for a group photograph in the Oval Office. When Jackson's scandal broke, he briefly closed shop. But he soon said: "The ground is no place for a champion. The ground is no place that I will wallow on." Back in business.

As to former President Richard Nixon, few have fallen from so high to so low so quickly. The only U.S. president to resign, Nixon did so just ahead of an impeachment posse, with a conviction in the Senate a near certainty. After leaving office, he got paid for an interview with David Frost, wrote a bunch of books and gave speeches on foreign policy. He sufficiently redeemed himself, to the point that by former President George W. Bush's second term, many Democrats thought Bush's "crimes" worthier of impeachment than Nixon's.

There are many lessons here. There is the silliness of considering celebrities, about whom we really know very little, to be our "role models." There is the envy, sometimes, for the lives of others when very little is as it seems.

Fortunate is the person who can look back on his or her life and say, "I would do it all again the same way." My dad once said that to me. Most of us mortals have made mistakes, sometimes too many to count. Some mistakes have to do with career. Some have to do with money. Some have to do with other poor decisions and poor choices -- reconsidered, of course, with the benefit of hindsight.

But the ones that cause the most regret and the most pain have to do with the treatment of other people -- especially those who loved and trusted us. We finally discover the value and worth of what we once had but failed to appreciate. And now it's too late. Good luck, Mr. Woods.