Fake Praise for GHWB: Where Were Media When He Needed Them?

Larry Elder
|
Posted: Dec 06, 2018 12:01 AM
Share   Tweet
The opinions expressed by columnists are their own and do not necessarily represent the views of Townhall.com. 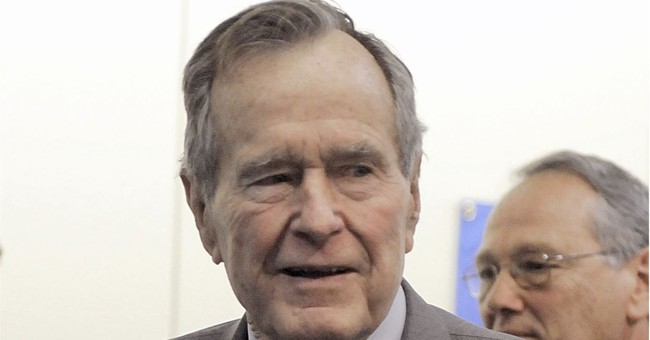 As with the passing of former President Ronald Reagan, the media are in full praise mode following the death of former President George Herbert Walker Bush. Where were they when the one-term President needed them? In Reagan's case, even his haters grudgingly acknowledged the overall success of his presidency. As for Bush 41, the media's praise of Bush's "grace" and "class" serves to indirectly to attack President Donald Trump by showing the contrast between the two Republicans' styles and characters.

But what did much of the liberal media think and say about Bush at the time?

When Bush announced his intention to seek the presidency in 1988, a Newsweek cover story showed the former New Englander navigating a small boat -- get it, he's elite -- with the caption "Fighting the Wimp Factor." Wimp? Bush joined Navy on his 18th birthday, serving in WWII as the Navy's second-youngest aviator. He flew 58 combat missions, was shot down by the Japanese and was rescued by an American sub.

When he ran in 1988, his resume included almost seven years as Reagan's vice president, two terms as a member of the U.S. House of Representatives, director of central intelligence, head of the Republican National Committee, ambassador to the U.N. and de facto ambassador to China, in addition to being a decorated WWII fighter pilot. President Barack Obama was apparently unimpressed: In 2016, he said, "There has never been any man or woman more qualified for this office than Hillary Clinton."

Despite Bush's mind-numbingly impressive credentials, he somehow found himself tagged as insufficiently macho. In 1997, Evan Thomas' Newsweek wrote: " Bush suffers from a potentially crippling handicap -- a perception that he isn't strong enough or tough enough for the challenges of the Oval Office. That he is, in a single mean word, a wimp." The year before, Republican pundit George Will called him a "lapdog." A Washington Post editorial now praises Bush. Yet neither the Post nor The New York Times endorsed him for president in 1988 or 1992.

In fact, during his presidency, The New York Times aided and abetted the narrative of an elite "out-of-touch" patrician. During the 1992 election year, the Times ran a front-page story about a President so clueless about the life of the average American that he was unfamiliar with the supermarket checkout scanner. But the story was fake. A National Grocers Association systems analyst, the man who showed Bush the scanner, said: "The whole thing is ludicrous. What he was amazed about was the ability of the scanner to take that torn label and reassemble it."

Black Democrats like Rep. Maxine Waters, D-Calif., called him "racist." In 1992, Waters said: "(Bush) is a mean-spirited man who has no care or concern about what happens to the African-American community in this country. I truly believe that."

Bush stood accused of racism for "using" the infamous Willie Horton ad that ran during the 1988 campaign, even though his campaign had not produced the ad. Furthermore, the issue of his opponent Michael Dukakis' Massachusetts furlough program was first brought up by Dukakis' Democratic rival Al Gore. Under Dukakis' program, Horton, a convicted murderer, committed rape while out on furlough.

Bush, pressured by Democrats and some in his own party, broke the famous pledge he made at the 1988 Republican convention: "Read my lips. No new taxes." NBC News' Andrea Mitchell now says "breaking that pledge showed the character and resolve of the man." Similarly, Newsweek's Thomas now calls the broken tax promise an act of "courage." But asked in a 1992 press conference whether he considered breaking the pledge "the biggest mistake" of his presidency, Bush said, "Well, I don't know about the biggest, but yes ... I'm very disappointed with Congress." At the 1992 Republican convention, he apologized for breaking the pledge. James Carville, Clinton's lead campaign strategist, called it "the most famous broken promise in the history of American politics."

Did reporters reward Bush for his tax concession? Hardly. A poll of Washington, D.C., reporters found that, in 1992, 89 percent of them voted for Bill Clinton. Only 7 percent voted for Bush.

In October 1992, according to Investor's Business Daily, over 90 percent of the economic news in newspapers was negative. At the time, the economy was well into a recovery, on its 19th consecutive month of growth. Yet much of the business news was sour. In November 1992, Bill Clinton won. That month, only 14 percent of the newspapers' economic news was negative. As recently as 2012, a PBS documentary repeatedly insisted Bill Clinton inherited an economy in "recession." In fact, the GDP in Bush's final quarter grew 3.8 percent.

When son George W. Bush won the presidency in 2000, mom Barbara Bush expressed surprise. "You're not going to like this," she said, "but my gut feeling is that all the media is against George, Republicans, any Republican." Indeed. From that very media, currently fawning over a man they now call a "statesman," George Herbert Walker Bush deserved better. Much better.