'Kerosene' Maxine Waters: How Much Longer Will Her District Tolerate Her?

Larry Elder
|
Posted: Jul 13, 2017 12:01 AM
Share   Tweet
The opinions expressed by columnists are their own and do not necessarily represent the views of Townhall.com. 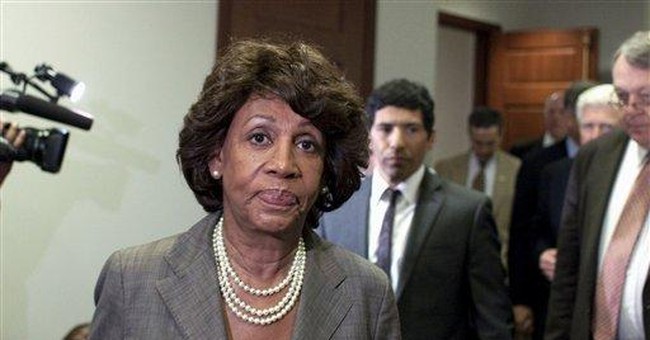 Rep. Maxine Waters, D-Calif., has become President Donald Trump's fiercest congressional critic. In eight years, Obama never had a Republican nemesis the likes of Waters, who recently said, "I'm taking the gloves off." Seventeen years ago, I wrote Waters a letter. She never answered. It read, in part:

Your power in America, and especially in the black community, is substantial. I honestly, and sincerely, urge you to rethink your positions on several issues. Despite my acknowledged harsh criticisms of you, I never once attacked you personally. I said, on many occasions: "I don't question her heart, but I question her head." I called you a hardworking, tireless warrior for your views.

However, your position on major issues affecting the black community is simply flat-out wrong. Not only do your positions fail to advance the interests of blacks but also, in many cases, actually hurt them.

In "America in Black and White," authors Stephen and Abigail Thernstrom clearly show that the black middle class preceded affirmative action. By affirmative action, I mean preferences, the lowering of standards to achieve "diversity" or "multiculturalism" or "inclusion." I do not include outreach, or using efforts to inform others, irrespective of race, gender, etc., of available opportunities. Moreover, affirmative action insults the hardworking black men and women of this country who, since slavery, built the black middle class, day by day, brick by brick, backache by backache.

In 1963, Ebony magazine ran a series of motivational articles called, "If I Were Young Today." Each month, they asked a black achiever -- Federal District Judge Herman Moore, union leader A. Philip Randolph, famed Los Angeles architect Paul Williams -- to provide advice to today's youth. Each spoke of drive, vision, hard work and preparation. Not one even implied the need or desire for preferential treatment.

In 1963, Whitney Young, then head of the Urban League, proposed a kind of "Marshall Plan" for blacks. One league member, however, objected to what he called "the heart of it -- the business of employing Negroes (because they are Negroes)." Moreover, Whitney Young suggested his "Marshall Plan" for a period of 10 years. This means, if Young prevailed, affirmative action would have ended in 1973!

Lower college-graduation rates for blacks result from lower standards used in minority admissions to achieve campus "diversity." This mismatching of students, placing someone in a major-league school when he or she would have performed better in a triple-A league, causes -- according to one study -- a loss of $5.3 billion a year to the black community. Moreover, affirmative action in higher education masked the real problem: substandard education in K-12. Yet you resist many changes urban parents want, including vouchers.

You also fight any attempt to roll back the welfare state. Census records from 100 years ago found blacks, in some cases, more likely than whites to marry and have children within a traditional family structure. As recently as 1960, 22 percent of black children were born to unwed parents. Today, the figure stands at 70 percent, with 80 percent spending at least some time living without a father in the house, at least for part of their lives. Racism? Blame Lyndon Johnson's "War on Poverty," coupled with a "you-owe-me" victicrat mindset that creates dependency and fosters irresponsibility.

The majority of blacks reflect increased prosperity, growing homeownership and steady asset accumulation. The minority, the so-called black underclass, remains disturbing. Quite simply, we see too many children having children. It stands, far and away, as America's No. 1 problem. Whatever role racism played, the complete abolition of white racism would leave these problems unresolved.

Racism no longer remains a potent threat in American life. Hard work, personal responsibility, focus, avoiding slovenly behavior and getting an education will create growth and opportunity. You display precisely these qualities in your life and career, and they formed the basis for your success.

But you refuse to acknowledge this good news, preferring to blame racism. In 1973, former Black Panther Joanne Chesimard gunned down a New Jersey State Highway Patrol officer. A jury convicted her of murder and sentenced her to life in prison. In a daring breakout, Chesimard escaped from prison and fled to Cuba. Congress passed a unanimous resolution urging Castro to send Chesimard back to America and face charges. You, however, wrote Castro a letter, urging him to let her stay, stating she was persecuted for her political beliefs and affiliations. You further likened her to Martin Luther King!

The letter went on from there.

For the 2018 midterm election, Waters has a Republican challenger. His name is Omar Navarro, born and raised in her district, one that is now 46 percent Hispanic and 24 percent black. Navarro ran against her the last election cycle, getting only 24 percent of the vote. But that was before Waters became the "face of the resistance." Some tacticians argue that with Waters leading the "Trump Is Public Enemy No. 1" brigade, the Republican Party is better off. Perhaps so.

But what about America?