Larry Elder
|
Posted: Feb 02, 2017 12:01 AM
Share   Tweet
The opinions expressed by columnists are their own and do not necessarily represent the views of Townhall.com. 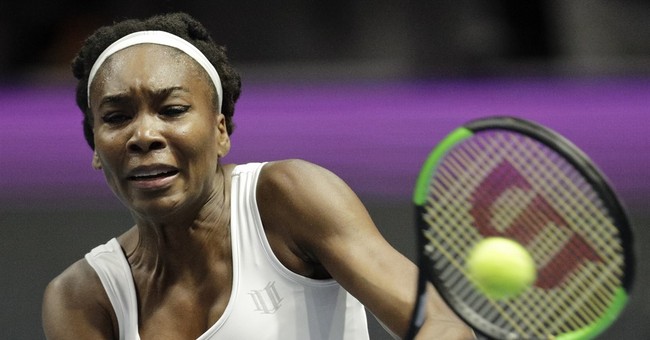 Full disclosure. I've known Adler for 20 years. Before two back surgeries and a shoulder surgery put my tennis-playing days out to pasture, I hit balls with him at a neighborhood club. More precisely, he would hit the ball to me, and I would attempt to return it. At the club, Adler was well-liked. If there were a bad word said about him, I never heard it.

While doing commentary for a Venus Williams match against Stefanie Voegele in the recent Australian Open tennis tournament, Adler made the following comment about Williams' strategy following her opponent's missed first serves: "(Voegele) misses a first serve and Venus is all over her. You'll see Venus move in and put the guerilla effect on. Charging."

For 36 hours, Adler said, "Nothing happened."

Then ESPN informed him, "There is a problem." Why, he was asked, did he refer to Venus Williams, a black woman, as a "gorilla"? Adler was told that, among other complaints, a tennis writer for The New York Times, Ben Rothenberg, tweeted: "This is some appalling stuff. Horrifying that the Williams sisters remain subjected to it still in 2017." He also tweeted: "And this is why it's so problematic. Innocent mistake or not, there has to be way, way more awareness and sensitivity."

ESPN issued this statement: "During an Australian Open stream on ESPN3, Doug Adler should have been more careful in his word selection. He apologized and we have removed him from his remaining assignments."

Adler insists that he did not say "gorilla." He says that he said "guerrilla," a word with no racial connotation. Other tennis commentators, he notes, use the word "guerrilla" to describe aggressive, attacking-style play.

An April 2, 2012, Sports Illustrated story had the following headline: "Daily Bagel: Agnieszka Radwanska Playing 'Guerrilla Tennis.'" The headline referred to a March 31, 2012, profile and interview of Radwanska by tennis writer Peter Bodo on Tennis.com, which included: "The adjectives that come to mind to describe Radwanska are: Implacable; remote; unflappable; leisurely; languid; measured. ... Hers is a game of the insurgent. It's guerrilla (emphasis added) tennis -- especially against taller, more powerful, more physical rivals."

In an ESPN.com article dated Jan. 26, 2013, Bodo wrote about a five-set match between Roger Federer and Andy Murray: "Against Federer, Murray confirmed that his new, more aggressive game can bear up under world-class stress. The 25-year-old Scot dictated the tone and pace of that match. He forced his 31-year-old rival, the all-time singles Grand Slam champion, to fight a bitter guerrilla (emphasis added) war."

Despite believing that he did nothing wrong, Adler apologized that he "simply and inadvertently chose the wrong word to describe her play." The apology did not save his relationship with ESPN, and he soon lost another tennis commentary job with a different channel due to the Williams "controversy."

Williams, by the way, was asked during the tournament about Adler's comment. She said she was aware of the matter, but wanted to concentrate on winning and declined to give an opinion. Who knows whether she said something behind the scenes.

This is similar to what happened years ago to a former aide to the newly elected black mayor of Washington, D.C. David Howard, a white man, used the word "niggardly" in a conversation about funding with two of his staffers. After seeing their reaction to the word, Howard immediately apologized to his entire three-person staff, two of whom were black. But a rumor shot around City Hall that Howard used a "racial slur." Niggardly, of course, means stingy or miserly, and has nothing to do with race. No matter; the controversy cause the aide to resign.

Adler says that several fellow tennis commentators privately contacted him, and agreed that he said nothing wrong. None of these commentators, however, has spoken out publicly on Adler's behalf.

ESPN has standards. One of its football commentators, Ray Lewis, once pled guilty to obstruction of justice in a murder case. Director Spike Lee has worked with ESPN, despite the fact that we once said he disliked interracial couples: "I give interracial couples a look. Daggers. They get uncomfortable when they see me on the street."

Adler's plight once again illustrates that America has zero tolerance for anti-black racism. John O'Sullivan, former editor of National Review, once wrote: "White racism does exist, but its social power is weak and the social power arrayed against it overwhelming."

But this was not a case of "white racism" -- it was a case of racial hysteria.