Obama on Orlando: It's All About the Guns

Larry Elder
|
Posted: Jun 16, 2016 12:01 AM
Share   Tweet
The opinions expressed by columnists are their own and do not necessarily represent the views of Townhall.com. 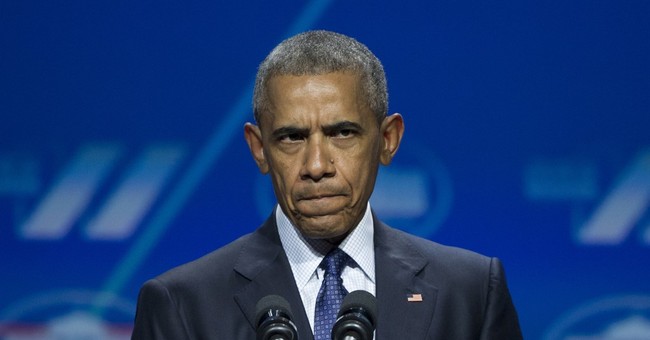 Trending
It did not take long for President Barack Obama to inject a plea for more gun control in his reaction to the Orlando terror massacre. In his five-minute, no-questions-taken-statement, Obama said: "Today marks the most deadly shooting in American history. The shooter was apparently armed with a handgun and a powerful assault rifle. This massacre is therefore a further reminder of how easy it is for someone to get their hands on a weapon that lets them shoot people in a school, or in a house of worship, or a movie theater, or in a nightclub. And we have to decide if that's the kind of country we want to be. And to actively do nothing is a decision as well."

What specific new gun law would have prevented this mass murder, Obama didn't say. And that "assault rifles" -- or fully automatics -- are already outlawed did not matter to the president.

The issue of whether we should be concerned about immigrants and the children of immigrants from Arab, Afghan and Muslim countries did not make the cut on the list of the president's concerns. The killer was born in America; his parents came from Afghanistan. The children of immigrants from certain countries seem to be particularly ripe for "radicalization." And in Britain and Europe, polls show that many young Muslims express support for suicide attacks.

At the first post-massacre press conference by Orlando officials, members of law enforcement said they didn't know the killer's motive, or whether he was inspired by domestic or international terrorism. But a Muslim cleric appeared at the press conference and proceeded to tell us to refrain from "rushing to judgment." Why was an imam speaking at a press conference if the authorities, at that time, were clueless about whether this massacre had to do with radical Islam? This imam, by the way, had previously linked the 9/11 terror attacks to the "radicalization" among Middle Eastern youth following the U.S. Persian Gulf war. Is this one of the so-called "moderate" Muslim clerics on whom we rely to dissuade young Muslims from becoming "radicalized"?

In April, an imam, reportedly living in Iran, visited an Orlando mosque. Prior to this visit, this imam had not only denounced gays but also said that killing them would be an act of mercy: "Death is the sentence. ... We have to have that compassion for people with homosexuals. It's the same. Out of compassion, let's get rid of them now." Orlando's mass murder, like many before, occurred in a gun-free zone. Florida law prohibits concealed carry in premises where alcohol is served. So the murderer knew that, apart from light security -- he had allegedly visited the club several times before -- his rampage would not be stopped by armed civilians.

The killer's father claims his son was repulsed and angry when he saw two men kissing. Yet apart from reports of him visiting this gay club several times over as many as three years, the killer also used a gay dating app. Was he a repressed homosexual, feeling at war with his anti-gay religious views?

So far, we know this about the killer: His first wife claimed he beat her. His father hosted an Afghan satellite TV show and had a YouTube channel that expressed pro-Taliban views. The killer worked for a private contractor that also provides security services for the departments of Homeland Security and State. His job allowed him access to and legal ownership of firearms. His contractor assigned him to work security at a gated retirement community and a St. Lucie County courthouse.

Apparently because of pro-radical Islamic statements he made to co-workers and contact with a known terrorist, the FBI had interviewed him on a couple of occasions. FBI Assistant Special Agent in Charge Ronald Hopper said the killer's statements and "minimal" terrorist contact warranted no further action. FBI Director James Comey defended his agency's investigations, and said he was "highly confident" the killer was radicalized by watching Islamic extremism on the Internet. "There are strong indications of radicalization by this killer and of potential inspiration by foreign terrorist organizations," said Comey.

Our First and Second Amendment rights protected the killer. And in this case, there are more questions than answers. But as a police officer friend told me as this massacre unfolded, "People live in a fantasy world if they think the police will protect them. The person best capable of protecting you -- is you." And for some three hours, this nightclub was a shooting gallery.

Just once when Obama calls for yet more gun control, will a reporter ask: "Mr. President, how often do American use firearms to defend themselves? And if defensive uses outnumber the times guns are illegally used to kill and maim, why would do you want more restrictions?" Just once.