The Meaning of Charleston 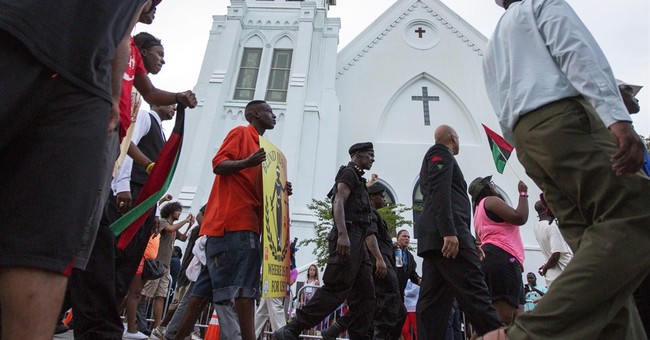 Trending
Almost immediately after a white killer gunned down nine black worshippers at a historic church in Charleston, South Carolina, out came the politics.

On the Capitol grounds in Columbia flies the battlefield flag of Gen. Robert E. Lee's Army of Northern Virginia, often erroneously called the "Confederate flag." Right after the shooting, calls came for the flag's removal. South Carolina Gov. Nikki Haley, until now, had defended the compromise that moved the flag in 2000 from the Capitol dome, where it had flown since 1962, to a nearby Confederate soldier memorial on the statehouse grounds.

The killer did not pull out a Confederate flag and use it to kill people. He used a .45. Also, he had flags of apartheid South Africa and separatist Rhodesia. Ban them, too?

President Barack Obama took the opportunity to make the case for additional gun control legislation. "We don't have all the facts," he said, "but we do know that once again, innocent people were killed in part because someone who wanted to inflict harm had no trouble getting their hands on a gun."

OK, now that Obama mentions it, suppose one or more of the churchgoers had been armed? South Carolina is one of 40 states that allow citizens to carry a concealed weapon on a "shall issue" basis, meaning that as long as you pass that state's basic qualification requirements -- things like age, training, no criminal history, etc. -- the state will not deny you a permit to carry a concealed weapon.

Permit holders, however, cannot bring a firearm to a "house of worship." Whether the confessed Charleston killer, Dylann Roof, knew this, we don't know. We do know that one of Roof's friends said Roof wanted to attack a local college. But, according to the friend, Roof switched targets because of the security around the school. If the school security deterred the killer, might allowing concealed carry in a "house of worship" have a similar effect?

How about we spend a little time on whether someone could have and should have said something to someone? Roof apparently told people of his intentions to start a "race war" -- and at least some friends knew he possessed a .45.

Obama said the tragedy reminds us "we've got a lot of work to do." He spoke of the 1963 church bombing in Birmingham, Alabama, where four black girls were killed and nearly two dozen people wounded.

But the differences between Birmingham in 1963 and Charleston in 2015 are staggering.

In 1963, Birmingham was home to one of the most virulent chapters of the KKK. Bombings of black properties were so frequent people referred to the city as "Bombingham." In fact, this church bombing was the third bombing to take place in that city since its public schools were forcibly desegregated just 11 days earlier.

Bull Connor, the commissioner of public safety, infamously sicced dogs and turned water hoses on civil rights workers. The governor, George Wallace, once stood in front of the state Capitol and shouted, "Segregation now, segregation tomorrow and segregation forever." The FBI was led by J. Edgar Hoover, who believed the civil rights movement was communist-inspired. Reportedly, the FBI knew fairly soon who had committed the bombing but sat on the information. It took decades before all of those involved were brought to justice. That was 1963.

Today the U.S. attorney general is a black woman, the second consecutive black person to hold the position. She called for a federal investigation of the Charleston shooting. South Carolina's governor is Nikki Haley, a woman of Indian descent. One of the state's U.S. senators is a black man, Tim Scott, the first black person from the South to serve in the Senate since four years after Reconstruction. Charleston's popular mayor has held the job for four decades and is respected by both black and white communities.

Does the racist Charleston killer represent a growing, threatening underbelly of American racism?

In 1969, Charles Manson, like the Charleston killer, wanted to start a "race war." Over the course of two nights, he ordered the murder of seven people. And Manson had a "family" of followers. The Charleston killer complained that he could recruit no help. Did we launch into a national soul search over whether Manson represented white racism? No, we placed him in the category of murderous, evil deviant -- the same place to put the Charleston killer.

This is not your grandfather's America.